By Isaac Lorton
After a 10-hour drive, I arrived home around 7:30 on a Sunday night. My partner set a box of CSA veggies, a week’s worth of groceries, and a plate of still-warm eggplant parmesan on top of Poppy the pop-up camper. Then she stepped back. I was on the opposite side—my new ‘partner’ parked in between us. We stood still and stared, doing our best with our eyes to convey a warm welcome, the relief of being home, the excitement of a loved one’s return, the sadness of not being able to actually be in the same space, the weight of our choices, the hilarity of the situation. Gravity and levity. There was a necessary barrier between us, and a silent companionship, knowing we were going through it together. We said hi like 10 feet apart. We talked about the most recent leg of my journey. It was an odd experience (that I’m sure you all have had at least once in the past seven months), not being able to hug someone. I took the care package and went to go set up Poppy in the dark. I had six nights at the Quechee KOA campground.

Under 10 minutes later, I arrived at the place I always drive by but never thought I’d stay at. Pulling in, there was an airstream to the left of me and RV to the right, and there I was stuck in the middle, with the airstream owner’s truck part-way into my site. I gave myself a pep talk. ‘It’s alright, I got this. These little pop-up campers aren’t notoriously squirrely and don’t jack-knife easily.’ And I nailed it. Almost. I got in the spot okay and near enough to the hookups. But I was too far forward. After a little readjusting, I welcomed Poppy to Vermont, put on a headlamp, and set her up in the dark. Placed tire blocks, unhooked chains, unplugged lights. Wood blocks down under the hitch, hitch jack cranked up, truck pulled forward. Levelled Poppy out, placed jacks under corners, unlatched top, and cranked to expand. Beds slid out, braces in place, canvas velcroed, door dropped into its frame. Sink flipped, shelves up, and table set. Shell assembled, I was ready for the week.
I devoured the remaining eggplant parmesan—now cold—and passed out listening to the intricate chorus of restless crickets, bird calls, intermittent rain, and cars swooshing by on Route 4.
How did I find my “self” living in a pop-up camper named Poppy staying at the Quechee KOA?   Due to some covid cancellations, general chaos, calendar readjustments, and a 10-person family wedding, I needed to quarantine separately from my partner who was concurrently quarantining in our one-room apartment.
I had been on my way back to Vermont from a month-long research trip for a book I am writing, and I did not want to put her at risk and prevent her from attending her brother’s wedding.
Now, we didn’t fully realize this until I was a day out from Vermont. It was all the anticipation of crossing a finish line into the celebrating arms of a loved one; then it was the shared disappointment and embarrassment of falling down on your face with the end in sight. I had gone to Arizona, the state I was born in, and the Mexico-U.S. border, where my grandfather grew up. I had set out to find the setting of some family folklore, and returned with material for my book. I stayed in Poppy (I did not name her, I simply kept the name that the family I bought her from had given the little old camper) and my truck on the trip so I could travel safely, socially distancing myself and sleeping semi-outdoors. Even though Quechee is in the name, the KOA is technically in White River Junction, where I also reside. I came home, but had to stay away from those who make it more than just a place to crash.
Monday, I woke up to the sound of loud thuds and raps on metal. Pine cones torpedoed down upon the top of Poppy’s aluminum frame and fabric slideouts. I would hear the tree limbs rattle, shaking off the night’s sleep and morning dew. The movement launched projectiles through an obstacle course of branches. There was a moment of silence, followed by a loud BANG! Direct hit to Poppy’s top. I imagined the trees towering over me swaying in celebration. Their tiny act of defiance against the encroachment of humans into their sylvan space. I tuned into the pattern of rustle, a breath, SNAP. When the pinecones hit the tarp sidings there was a solid WHUDT sound. Some pinecones rebounded off the top of Poppy. Some landed on the ground. Some remained up there. On the canvas, I could see them silhouetted by the early morning sun. Shadow puppets of the world outside of Poppy. 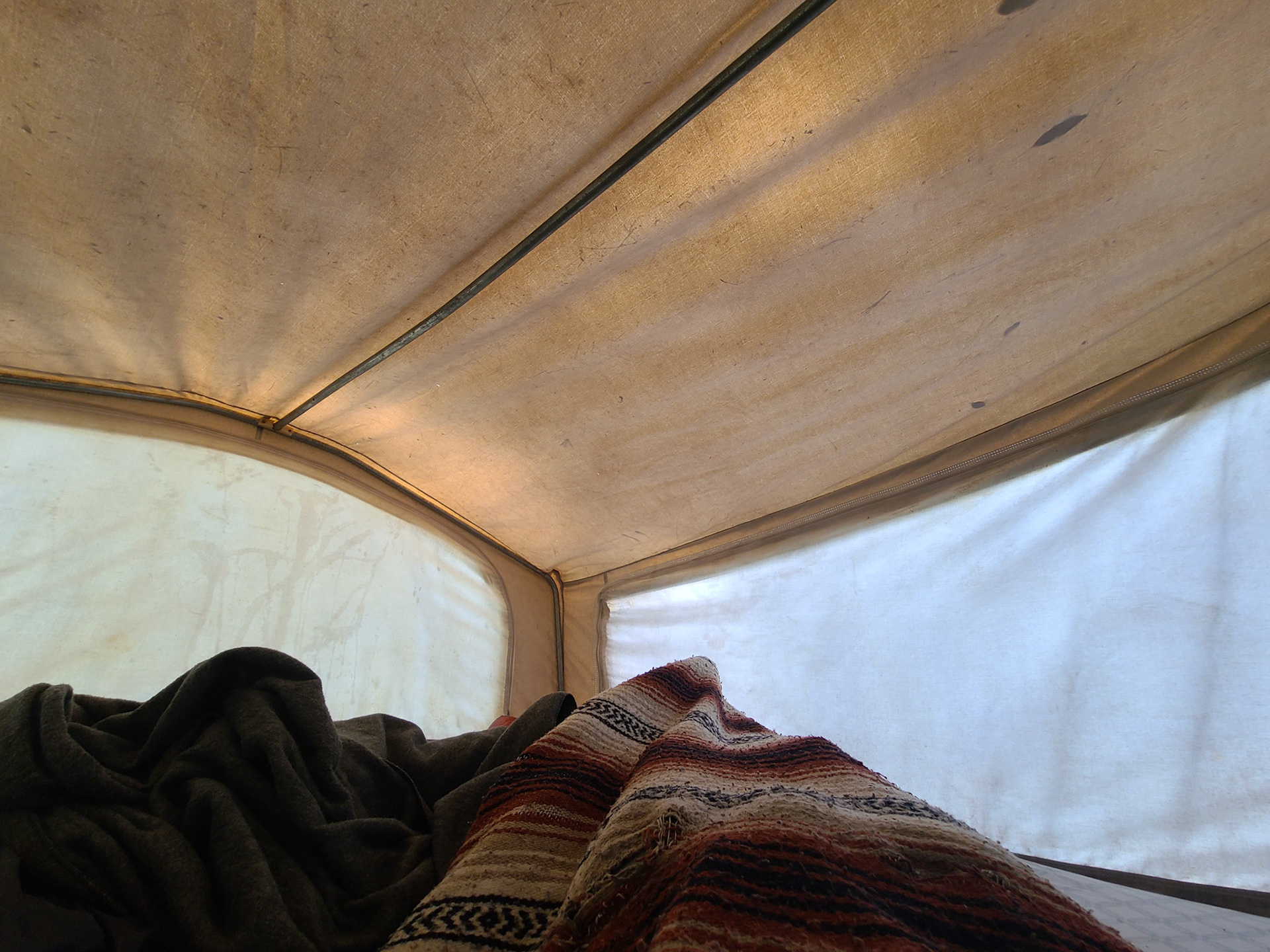 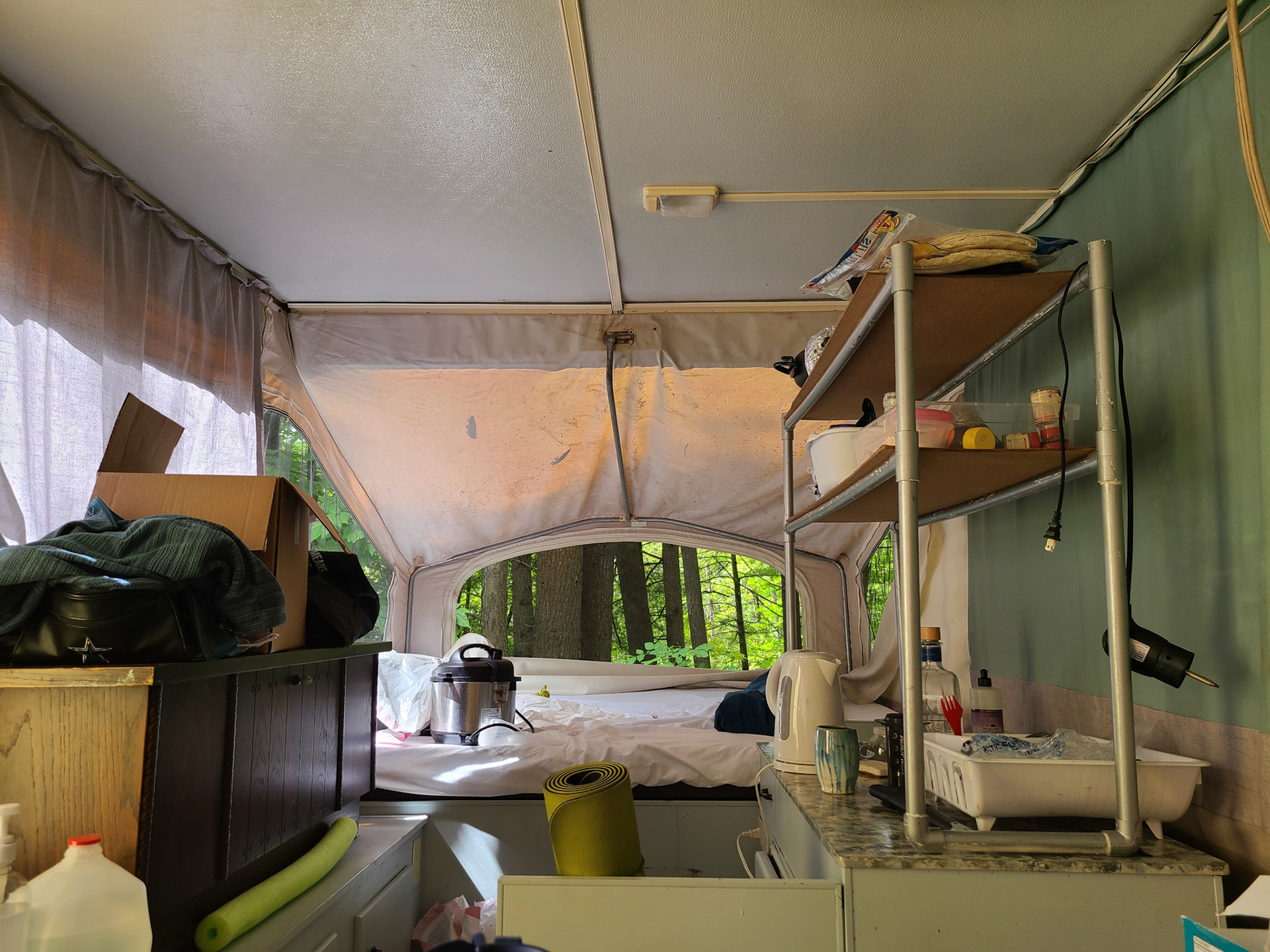 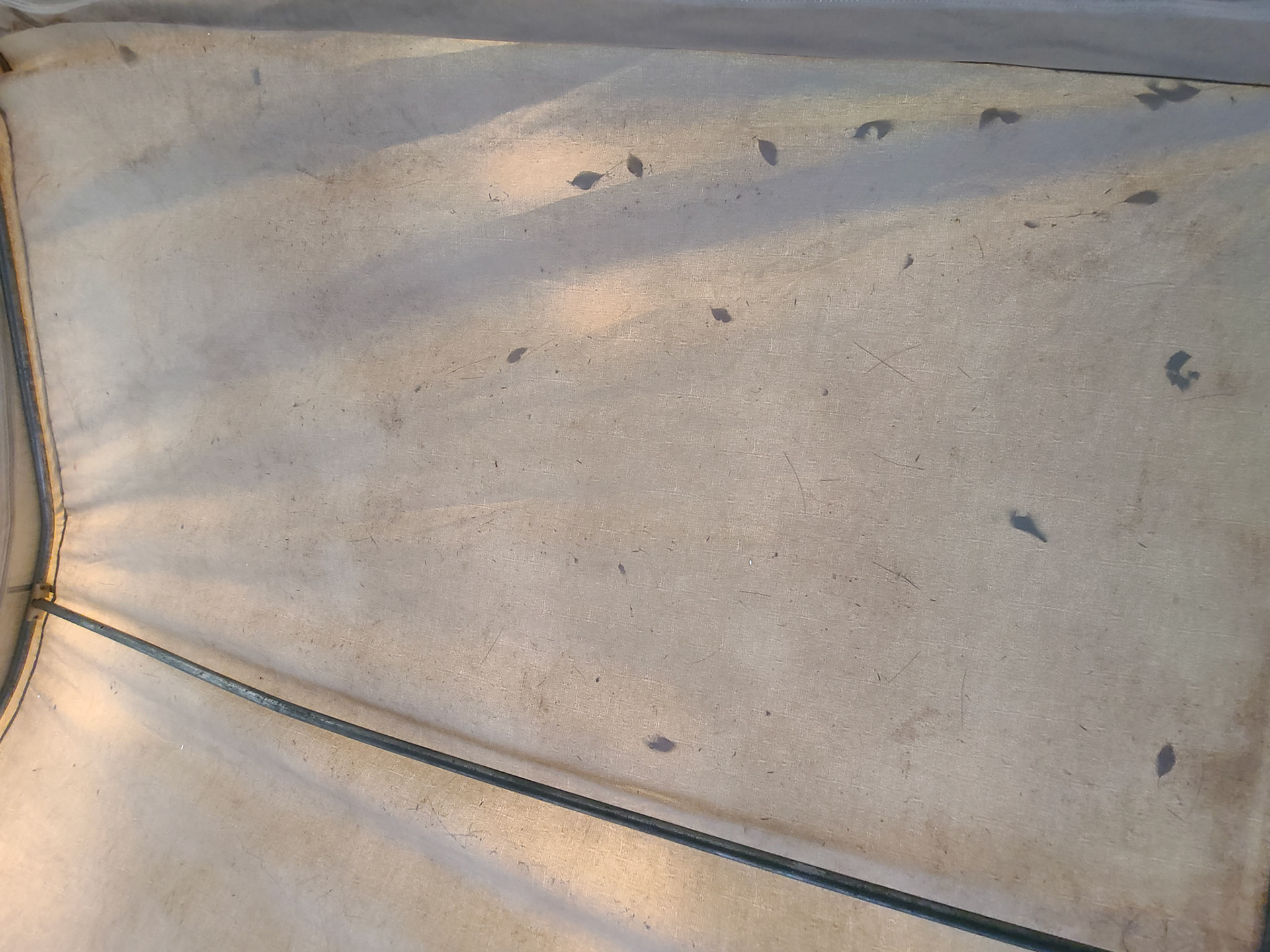 Out the door for the morning pee, the ground was littered with fresh green pine cones that had been blown from the trees in the storm the night before or had bounced off of Poppy to the manicured forest floor. Like little locusts; as mana, not as a plague. The late summer sun shimmered through the day-after-a-night-of-rain fog, diffusing the light softly. The first chill of Autumn’s breath in late August. I had slept in. It was the first time in a long time I woke up not feeling like I had to be somewhere right away; I was not keeping to a schedule. My only plan was to wait it out, as securely as I could. By mid-Monday morning, everyone had packed up their weekend and rolled out; I had this section of the campground pretty much to myself, save for the big motorhome next to me. There were other people still at the campground, in different sections, sprawled throughout the wooded slopes, connected by gravel roads and walking trails. I sat inside most of the day, not wanting to leave the protection of Poppy. Even though I was in the great manicured outdoors, without knowing for sure whether or not I had covid, I kept to myself. I did not want to accidentally interact with anyone, but after spending a month avoiding as many people as possible, I also had to suppress the urge to hug everyone. It stayed chilly. Sounds bombarded the thin walls and the smell of pine seeped into the canvas. That’s all I remember from that day.
Tuesday was much the same as Monday. I was now the only one in my section of the campground, my temporary neighbors having left that morning. I sat outside a bit more in a camp chair, but not as much as you’d think. I did not sit around a warm campfire, I did not walk about. Between the anxiety of leaving my little slice of levelled ground and the bliss of non-movement, I was a hermit crab and Poppy was my protective shell. I contented myself with the solitary solitude. I read a bit, wrote a bit, but wasn’t particularly productive.
Wednesday was spent inside. 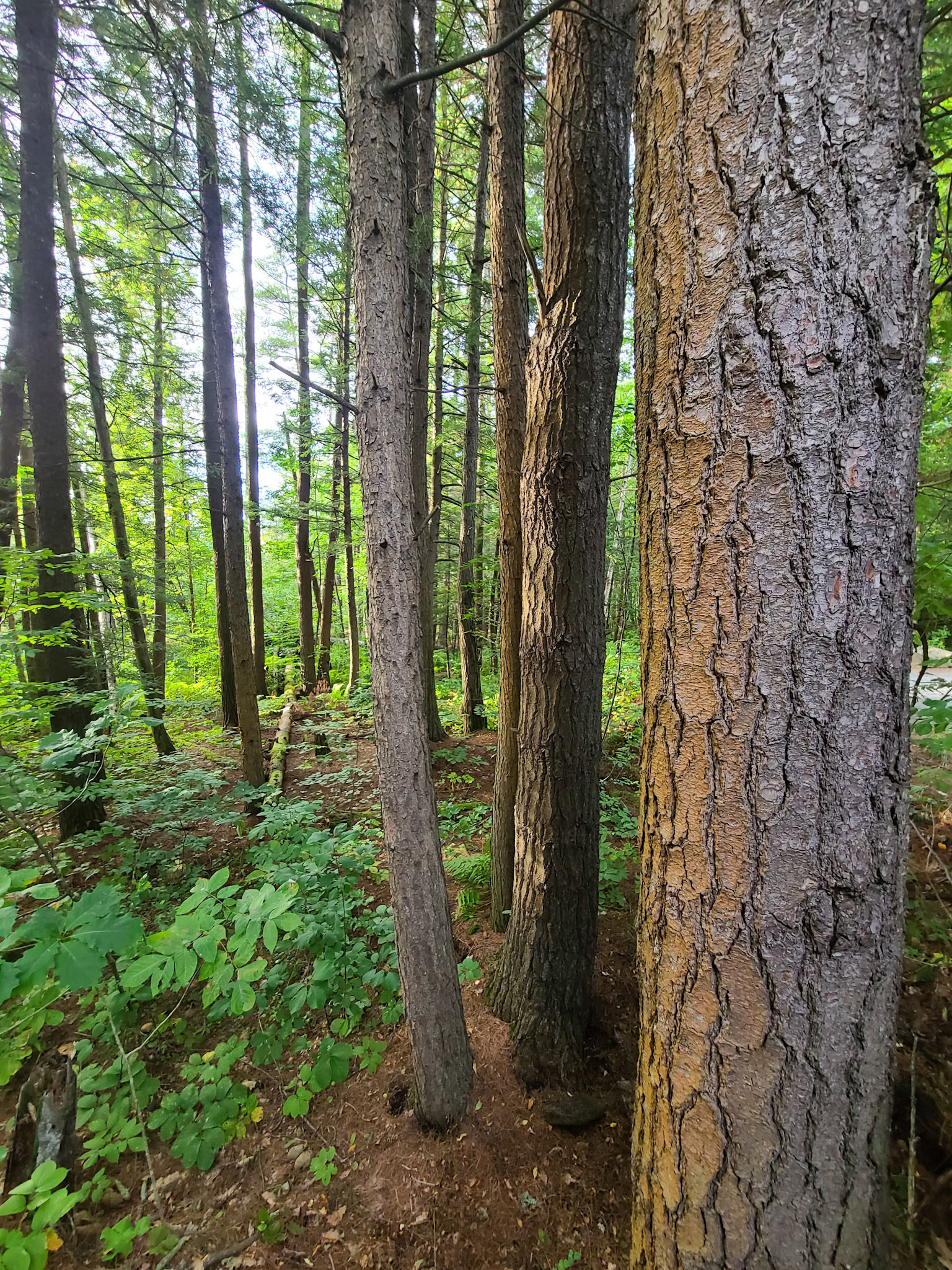 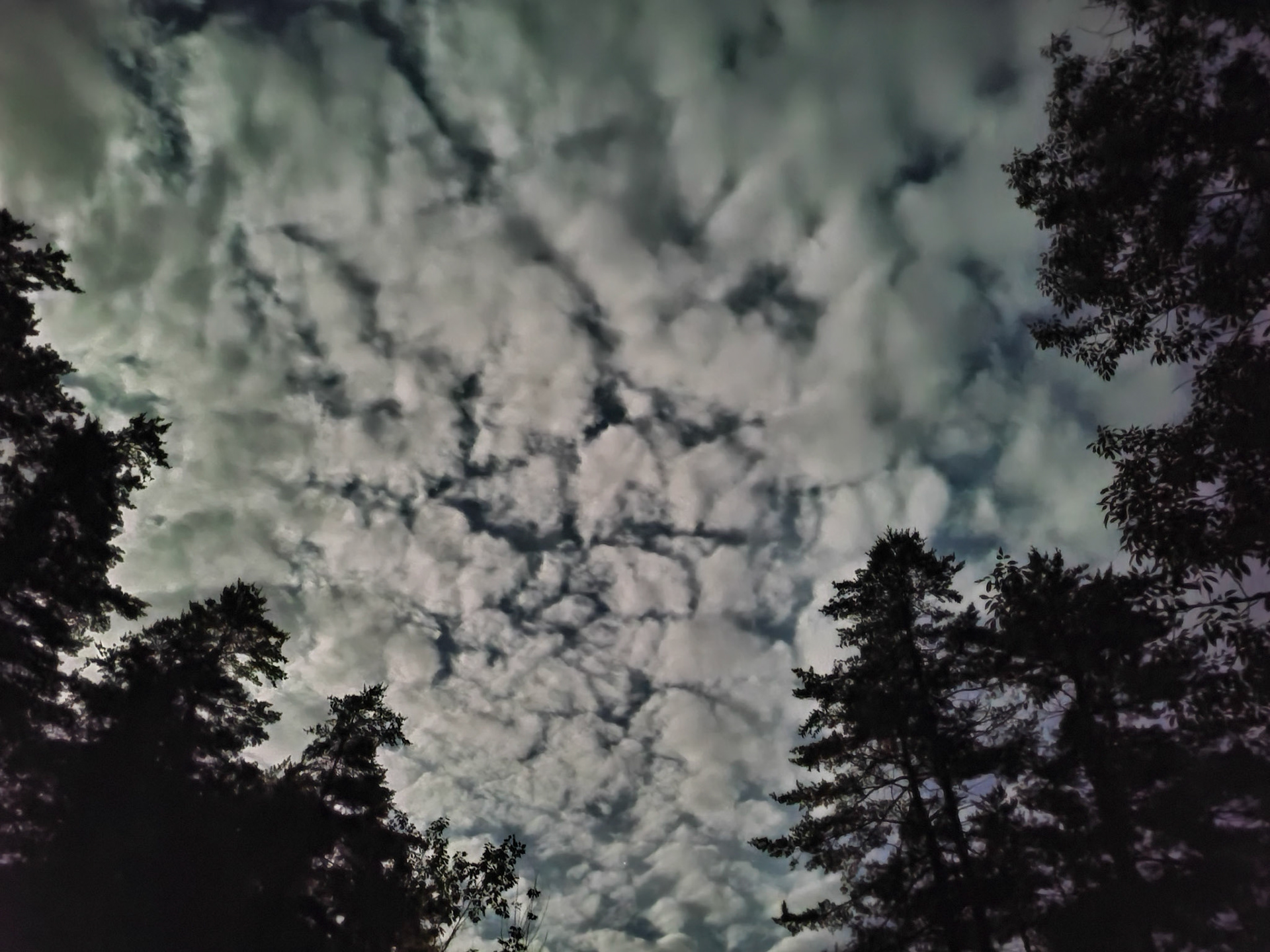 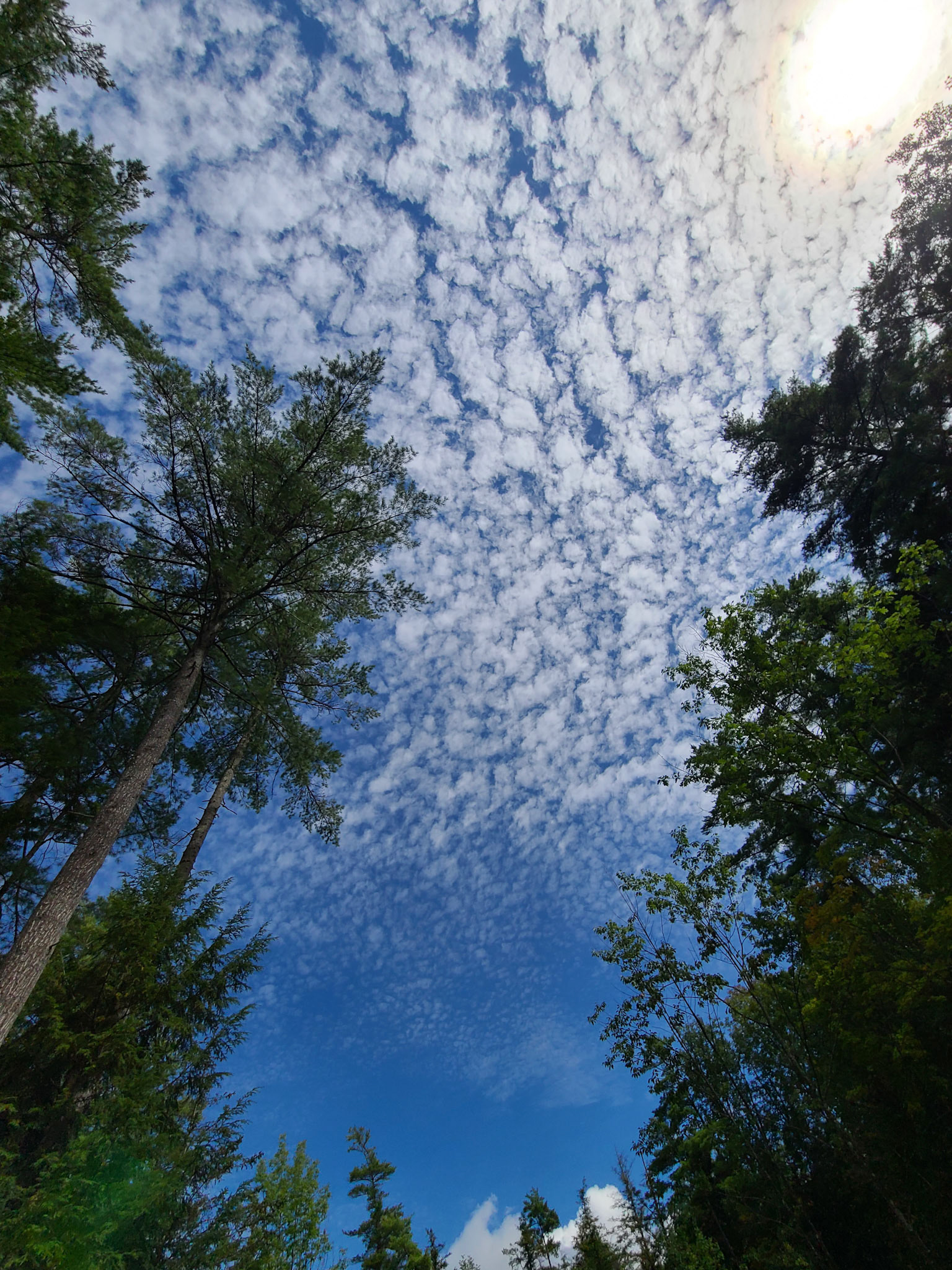 On Thursday, I got my covid test at a free pop-up testing site. That afternoon, a smattering of vehicles arrived for the long weekend. I was expecting the results within 48 hours, but come Saturday, I hadn’t heard anything—48 business hours maybe?
On Friday, even more people showed up—the place was packed as a campground can be—and I hid away. Unfortunately, I was only able to reserve the campground until Saturday.
Saturday morning I packed up and packed Poppy down.
Fortunately, I have a kind and generous friend who happens to live on 11 acres of land, and they allowed me to camp in their yard for Saturday night. I decided not to go through the whole production of popping up Poppy, but set up a tent instead. My friend left two brownies and a sour beer on the hood of my truck for me.
I optimistically thought I might receive my results on Sunday. That didn’t happen. I stayed in my friend’s yard another night, again in the tent, with rain pattering down. My friend brought out mango ginger bars for me.

Monday morning, I got my results. Negative.
I drove home and went inside still rattling in my shell.
Today
Going into this unexpected week, I remember thinking it would be a fun adventure—the adult version of backyard tent camping when I was little. I would be comically close to my apartment and would get to camp, and I could even get to write a quirky story about it when it was over. Win-win-win, right? Instead, I sat in stasis, thinking about my recent research trip, the state of the world, and my place in it. Even with the protection of a pop-up camper, the free time of a furloughed worker, and the means to go on such a trip, should one be travelling at all during a pandemic because of the unforeseen circumstances that might (and almost always do) pop up? No amount of planning can outdo the omnipresent speedbumps of life in movement. Not quite as fun as the comfort of camping in the yard, but just as significant to me. Some self-reflection, introspection—tormenting fun and funny torment.
I had been a sheltered tortoise, parked, pondering whether going on this trip had been worth it.
Two months later, I still don’t have an answer to these questions. I don’t know if I ever will.
October 2020

Isaac Lorton is thrilled to be writing, editing, and photographing in the Twin State region. Simply, Isaac is happy to be here in this place at this moment with this group of people.
↑Back to Top