Junction Editor Molly Papows recently caught up with Here In The Valley's Jakob Breitbach and Jes Raymond. Jakob and Jes started the Filling Station's weekly acoustic jam session, just one of a series of regular music projects they organize across the Upper Valley. The jam is an open circle every Tuesday from 7 – 9 p.m. All are welcome to listen or sit in; there's always some serious talent on display, and every week features a different mix of musicians and tunes.
Molly: How did the Tuesday jam get started?
Jakob Breitbach: The Tuesday jam originated as just a birthday party in March of 2017. I had happened upon The Filling Station while I was putting up flyers for our very first Upper Valley show in the spring of that year. It was the only bar around that had a pool table, and I thought it would be fun to have a “pool and pickin’ party.” But as it happens in Vermont winters, it snowed 18 inches that day, and I had to postpone the party until the next week. It was surprising how enthusiastic folks were about an acoustic picking session, so we just kept it going. 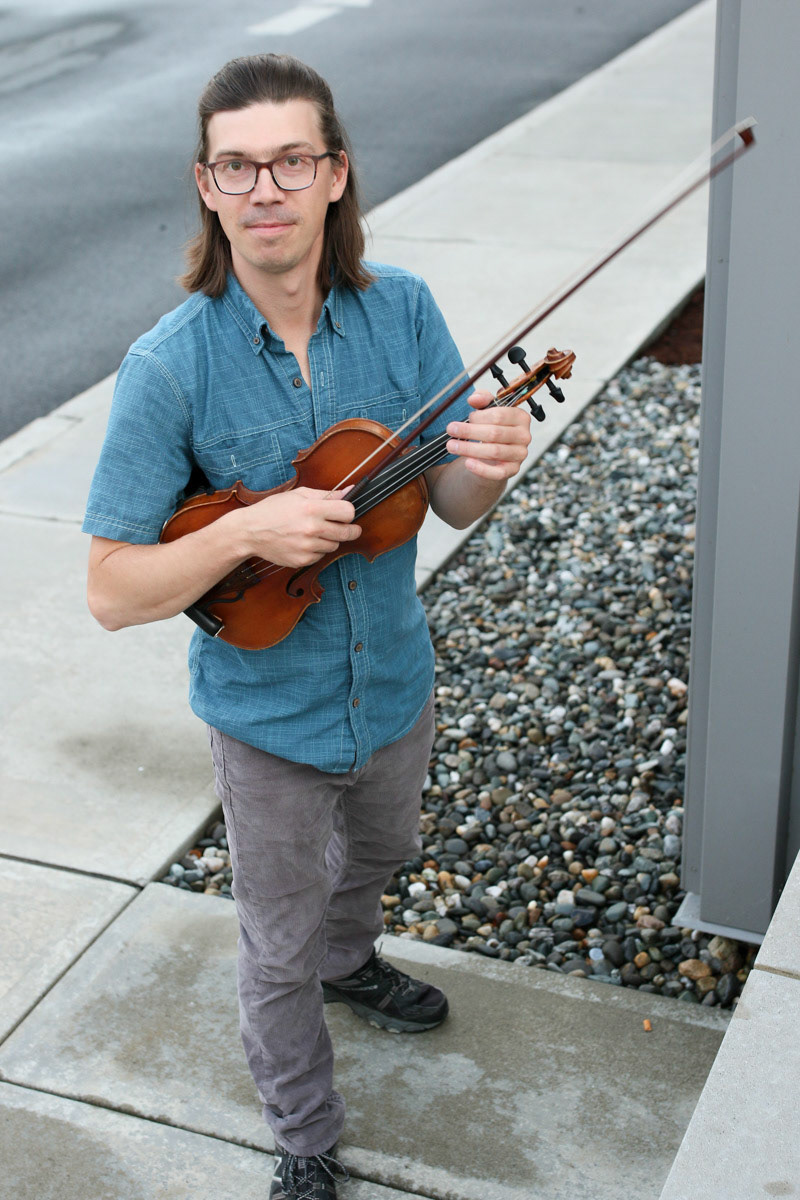 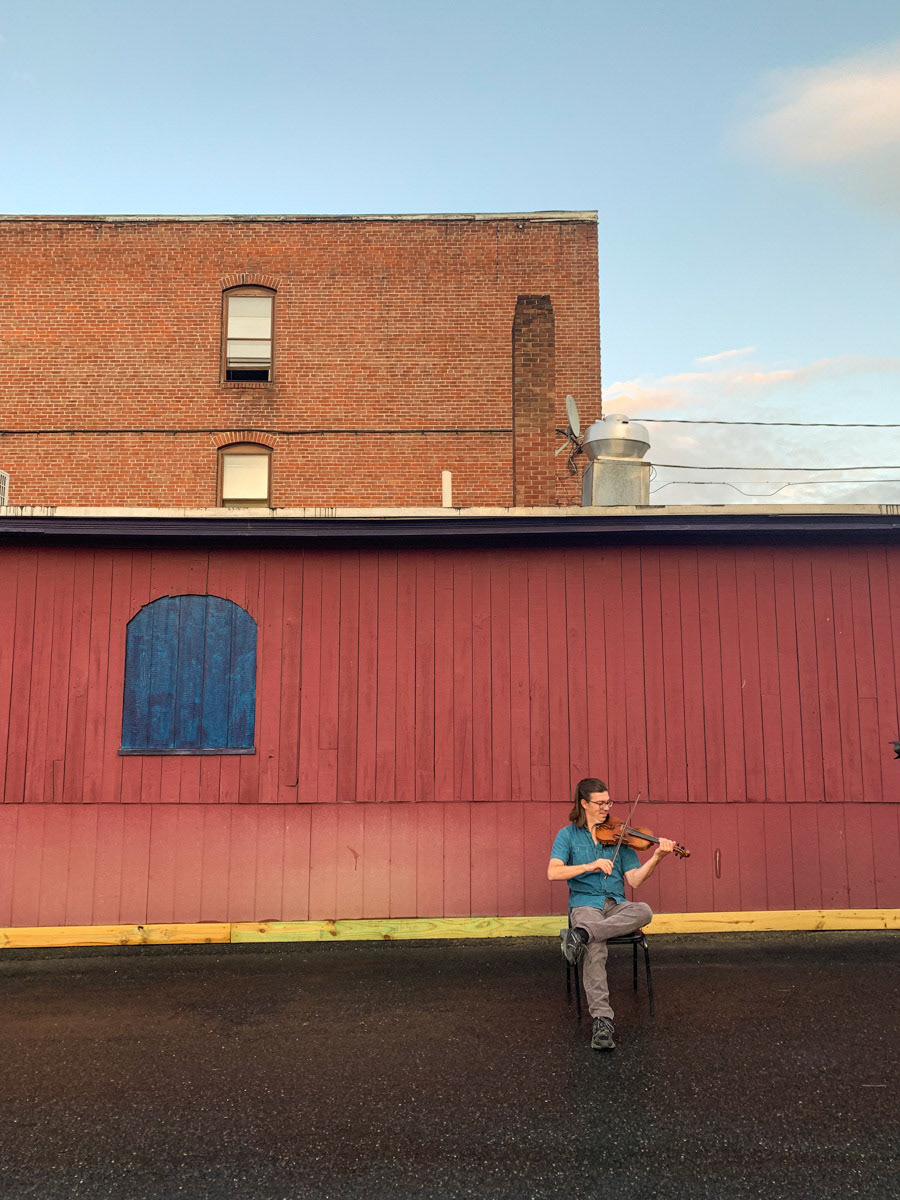 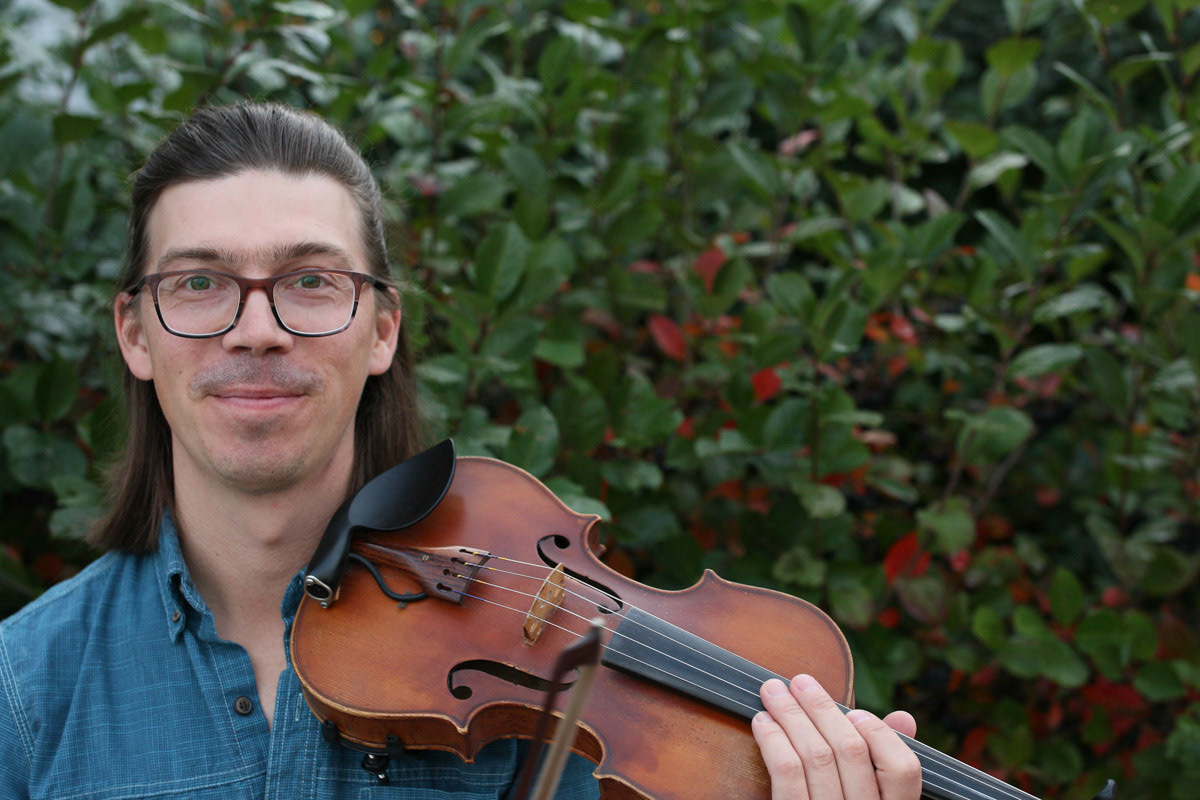 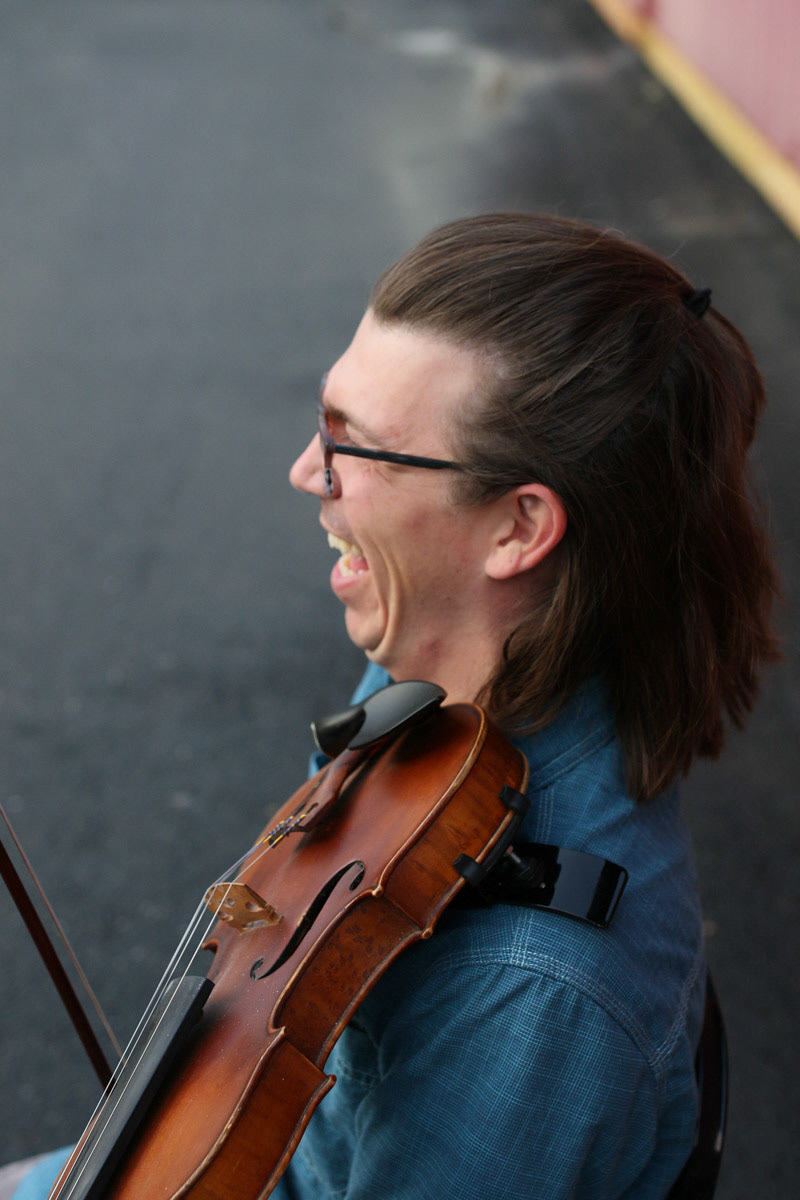 Molly: What most excites you about the New England folk and bluegrass community, and about the Upper Valley in particular?
Jakob: After living in the Seattle area of the Pacific Northwest for about 15 years, Jes and I moved to White River Junction (her hometown). We had been touring nationally with our band, The Blackberry Bushes, and the distance between gigs in the West was really starting to wear on us. New England is so much more tight-knit. The towns and gigs are so much closer together on the East Coast that we really looked at it as a smart business move to try to bring our miles and hours of windshield time down. Well, not more than a month after we moved to Vermont, we got pregnant, and that really changed everything. We decided to downshift our gears and stay much more local, building up our newfound wedding band business and developing more weekly gigs closer to home. We both still love to travel and envision touring again, but this last summer has been the most laid back -- with the least amount of travel -- we have ever had in what is typically our busiest season.
Every region has its own flavor or “take” on bluegrass and folk music. New England is much more influenced by the fiddlers of Eastern Canada and Ireland. The Upper Valley has this neat blend of rural communities and small towns, and The Filling Station jam session is a melting pot of all those different folks coming together.

Molly: What songs would you use to introduce a new listener to bluegrass?
Jakob: Well, the big names in early bluegrass are Bill Monroe, Lester Flatt, and Earl Scruggs. "Blue Moon of Kentucky" was one of Monroe’s most famous songs (written in 1946 and recorded in 1947), which of course Elvis Presley later covered and made a hit in 1954.
Being a fiddler, "The Orange Blossom Special" is probably the song folks most often ask for at a show or jam. This tune has a similar story to "Blue Moon of Kentucky" because it was well known in the bluegrass world long before Johnny Cash put it on his 1965 record titled "Orange Blossom Special."
Then you’ve gotta have a banjo tune if you’re talking about bluegrass, and probably the most well-known tune by folks is "Foggy Mountain Breakdown," written by Earl Scruggs in 1949.
Jes Raymond: There is a whole spectrum of bluegrass, from what folks call trad (traditional) — which basically means it sounds like Bill Monroe and other early players of the 1940s and 1950s — to progressive and jamgrass.
I’d include something from the first wave of that; Jerry Garcia played in both the Grateful Dead and a bluegrass band called Old & In The Way. Here they are doing one of Peter Rowan’s songs, “Midnight Moonlight.”
And all the way on the jamgrass end of the spectrum, here is The Infamous Stringdusters jamming with The Lil’ Smokies at Floydfest.
While in the past bluegrass has been seen as a male-dominated genre, there are so many incredible women artists doing great things. Here is Della Mae, whose lead singer Celia Woodsmith is from Norwich, VT.
Molly: I was also just reading about Sally Ann Forrester, who played accordion with Bill Monroe in the 1940s as one of the “Bluegrass Boys.” What other early female pioneers should we be listening to, and who else is on your radar right now in the contemporary scene?
Jes: So many! Hazel Dickens, Ola Belle Reed, Dale Ann Bradley, Claire Lynch, Alison Krauss, Sierra Hull, Rhonda Vincent, Alison Brown, Laurie Lewis, Sara Watkins. So many! 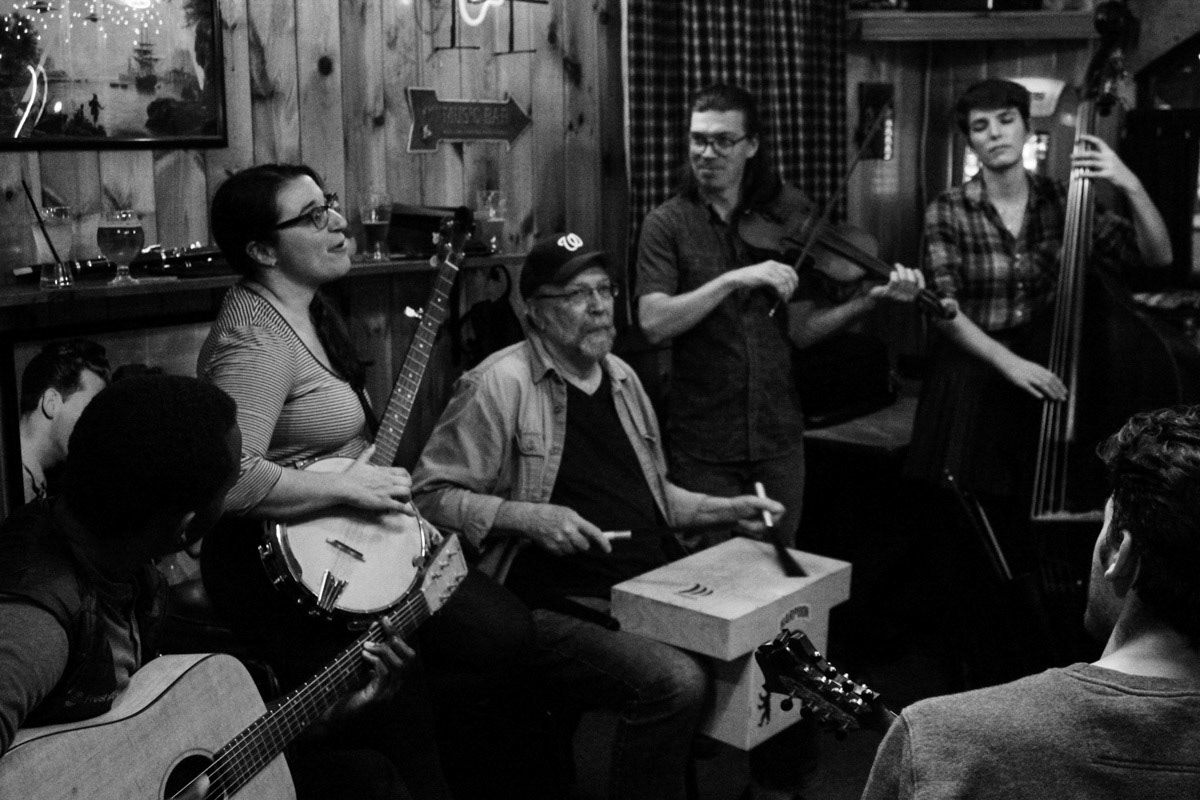 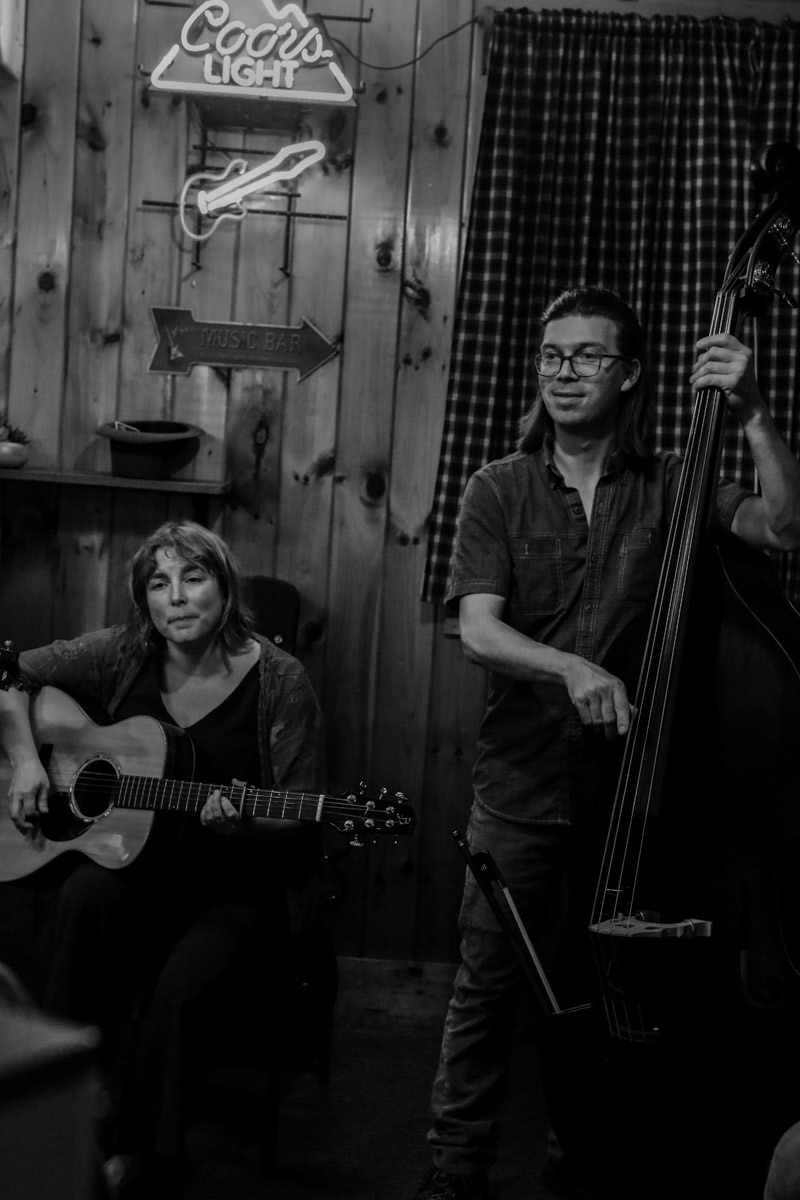 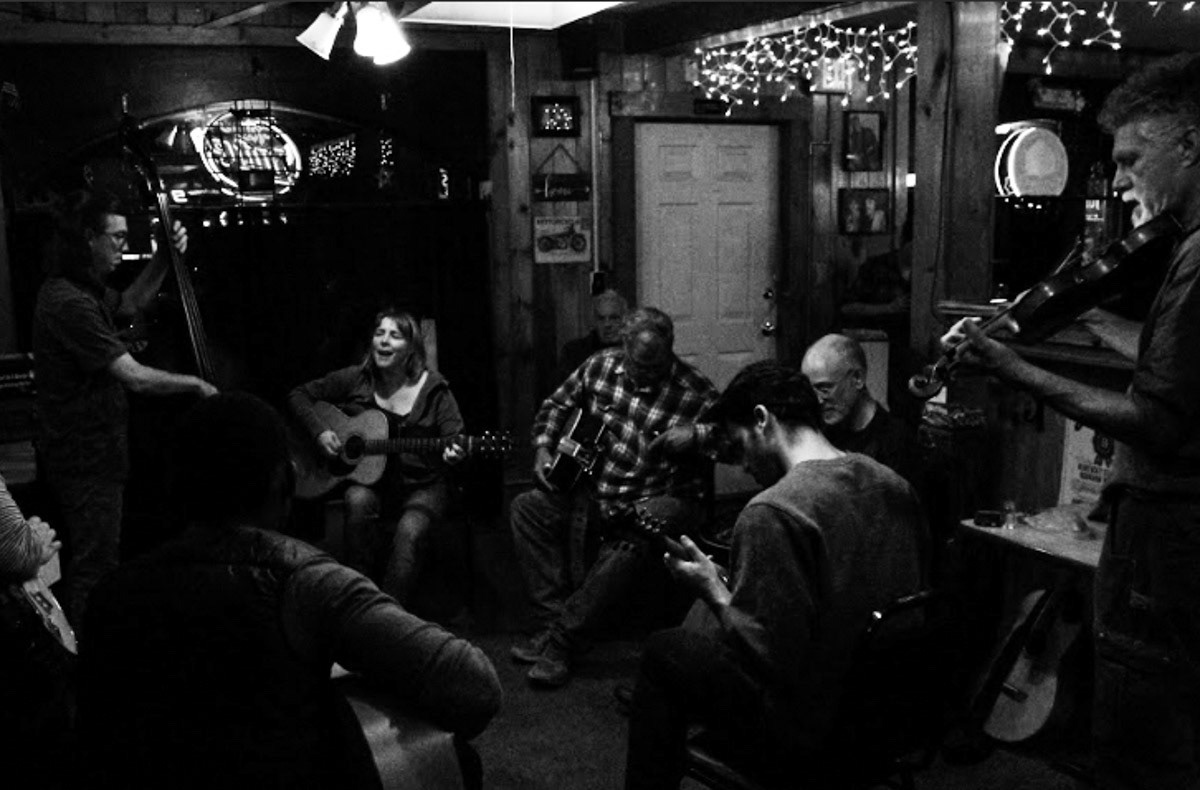 Molly: I have to admit that bluegrass music didn’t really click for me until I saw it in action when I was living in the Midwest. Let’s talk jam etiquette: when everyone’s really plugged in, the music feels completely seamless and organic, but what are the mechanics and traditions at work there?
Jes: Bluegrass is a genre that can bring people in through a variety of doors, and playing it is the biggest! It’s good to be reminded of how a picking circle works. Make sure your instrument is in tune. Offer everyone a turn to solo, and the easiest way to do that is to just to go around the circle. Really listen to the person who is soloing or singing. If you can’t hear them, play quieter or just take a little break and don’t play for a minute in a large jam. Try not to play in between songs because it slows the jam down. Make the music the most important thing, and don’t be afraid to stretch out or lay back.
Molly: What would you say to anyone who’s been considering sitting in, but hasn’t taken the plunge yet?
Jakob: For anyone who would like to join in the jam, feel free to come down to The Filling Station any Tuesday from 7 – 9 p.m. Listeners always welcome if jumping into the jam is a little intimidating at first.
Having a song or two in mind is a good way to prepare, but there’s plenty of room for folks to play along if leading isn’t your thing. 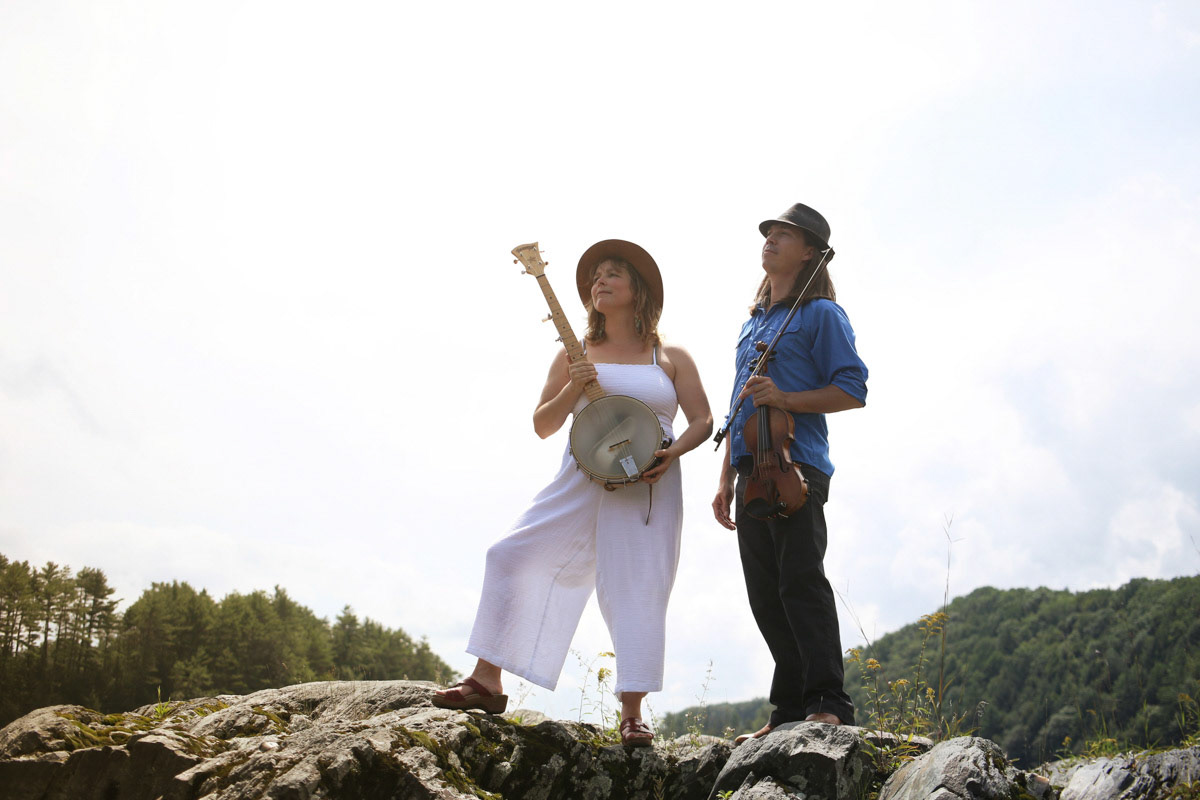 Photo by Will Freihofer 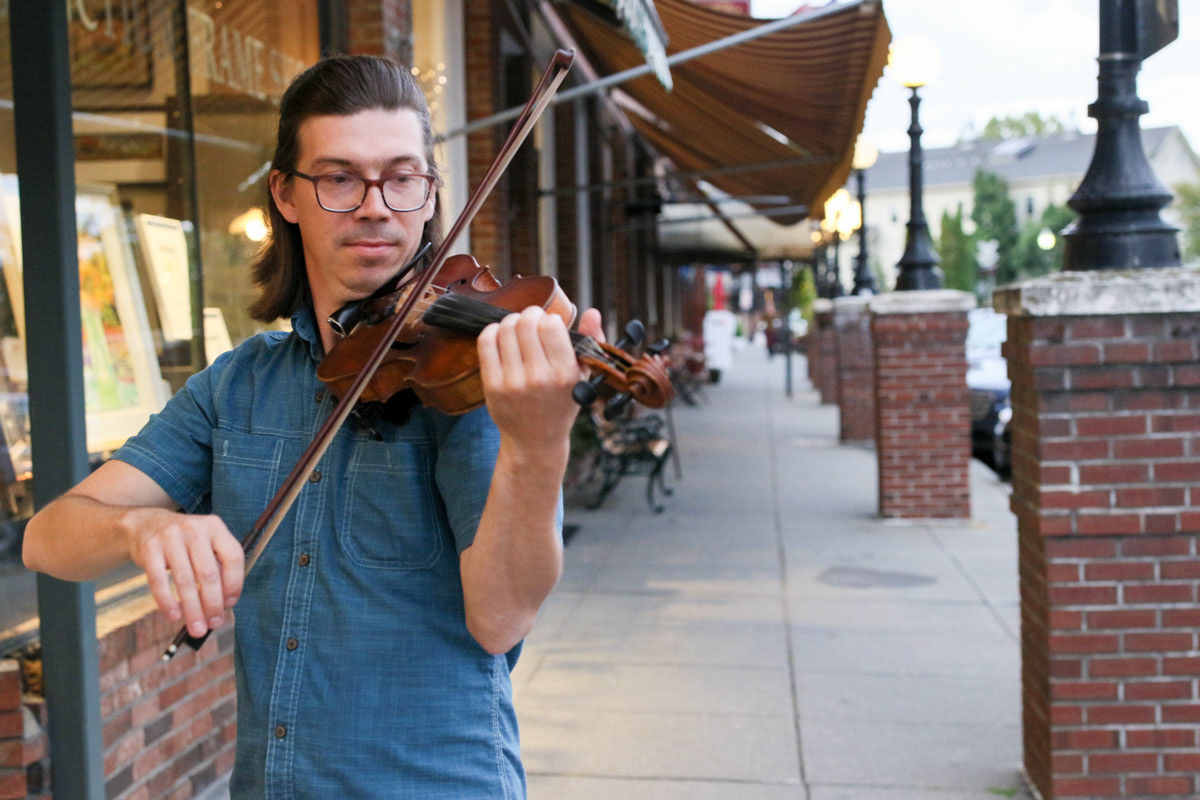 Jes Raymond and Jakob Breitbach have been traveling the world making music together for 10 years. They have distilled the essence of their musical partnership into a sound that honors the geniuses of chemistry, tradition and innovation. They are a powerful duet, combining skillful flatpicking and clawhammer banjo with virtuosic fiddle and time polished harmonies. Backed by a rotating cast of talented believers, or on their own, Jes and Jakob draw from the deep well of American Roots music for a modern sound that aims to truly stir the spirit with light-hearted rusticity, haunting elegance, and so much soul. Learn more about their music here and their Upper Valley programming here.​​​​​​​​​​​​​​
Molly Papows is an art historian based in Lebanon, NH. She has an MA in the History of Art and Architecture from Boston University and ten years of experience working in encyclopedic fine art museums. She's also interested in the many ways an artist can tell a story across disciplines — from fiction and nonfiction to poetry, landscape architecture, and music.
↑Back to Top