Writing this on the last day of summer, a crisp coolness clings fast to the clear air. Fog lingers in the morning. Wispy woolen caps top the mountains and thick mists veil the valleys. From the river, spectres radiate upward, swirling above the water. The noon sun is bright and warm on the hills and hollows of grown, green-full leaves. Shocks of early fall pop out here and there. The last of the wildflowers rustle. The harvest moon will shine splendidly in the sky tonight. And on this day of transition, the editors of Junction wanted to take a quick look back.
Though it’s a prompt we have not heard much since our schooldays, we hope it will fill you in on what we got up to during the recent warm months. We realize Junction took a bit of a summer break, running out of the classroom as soon as the bell rang, and we weren’t the best at communicating that to our audiences.
We have been going through changes, and missing some great editors (Hi, Molly and Colleen!) because they are out there following passions and career pursuits and taking on new and exciting opportunities. And we have added new editors (shout out to Courtney and Dawn!), who have been contributing their experiences and stories, and energy into making Junction happen! And though the world kept spinning, we had to take a moment to ourselves, and we hope you all understand. This is how two Junction editors—Hazel-Dawn Dumpert and Isaac Lorton—spent their summers.
Hot Weather Blues by Hazel-Dawn Dumpert
At the end of May, friends had us over to their yard. All freshly vaccinated, we sat in the gentle spring sun eating salty grilled meats with our fingers, drinking beer, laughing and dipping our toes back into togetherness. “This is how I will spend my summer,” I thought, as a sweet breeze moved green new leaves, “I will gather my friends, feed them and get them drunk, and learn with them how to be easy again.”
Then came the first 90-degree day; it was June 5. “This is too early,” I said to myself, “this isn’t good.” It got worse.
There were seven more days above 90 degrees in June, and for 16 days the humidity was more than 90 percent. In July, there were 26 days when the humidity was 90-percent or above, and for 19 days, nearly three weeks of the month’s four, there was rain. The longest stretch of July without it was five days, the next longest three. Otherwise, for the entire month, the longest periods without measurable precipitation lasted one day each. 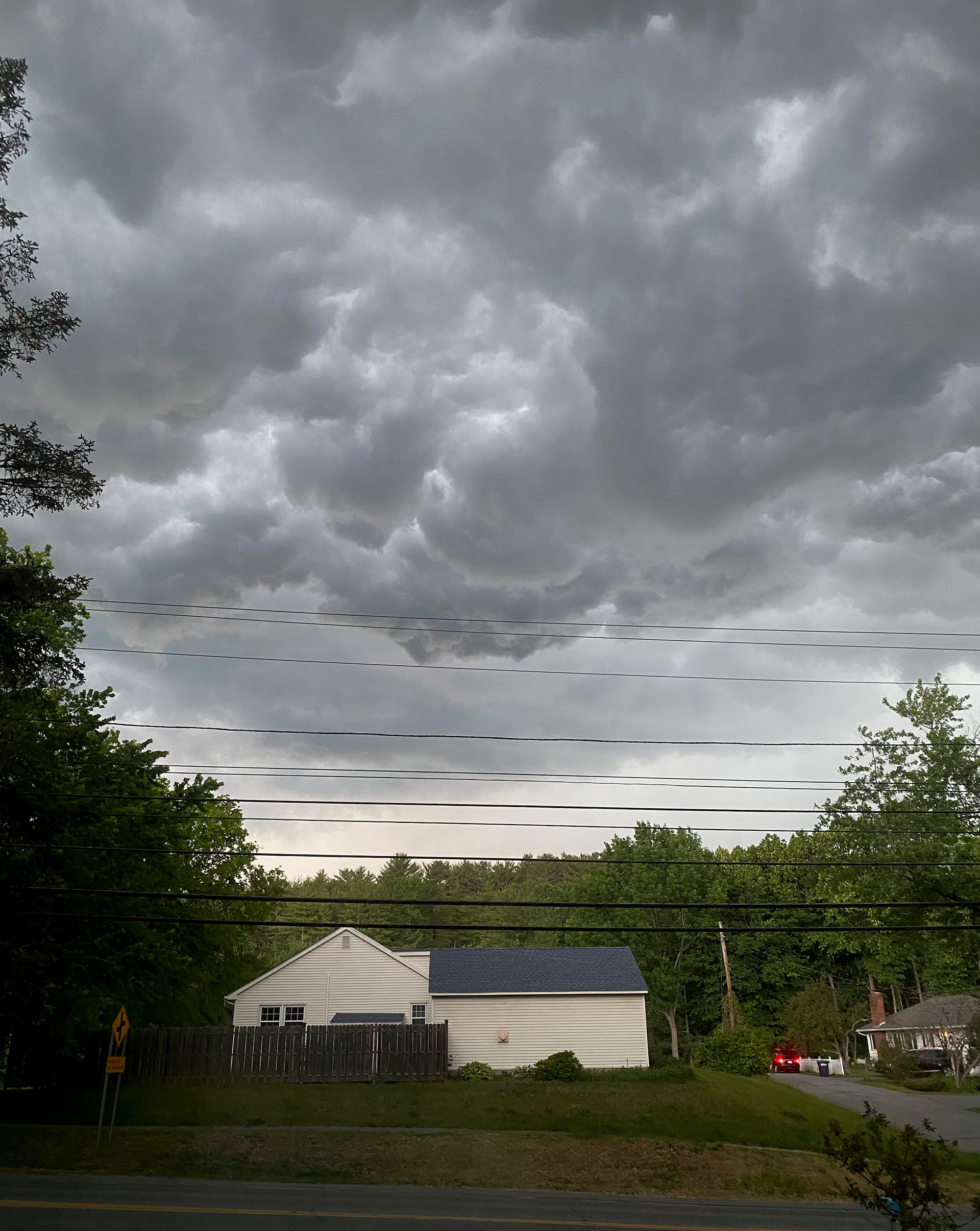 I obsessed, can you tell? I capitulated entirely, rolled right over and showed summer my belly. Refusing to enter the steam bath that was the great outdoors, I stayed in the house, where I rattled and paced, threw an endless succession of damp towels into the dryer, and resisted the urge to press fingerprints into woodwork softened by weeks’ worth of wet warmth. I gave up trying to wipe away the sweat and spent entire days in front of a fan, doing puzzles on my phone. I resolved to issue invitations, then, mopey and short-tempered, put it off, certain neither enjoyment nor hospitality could be mustered, thinking surely the weather would break — next weekend, next week, next month.
Was it petulant? Maybe. But in my defense (presented to my jury of one), when the light at the end of the tunnel turns out to be a swamp-gas mirage, despair is not entirely uncalled for. And, of course, there was displacement. If not exactly good, it was at least novel to blame something else for my continued captivity. It wasn’t contagion, physical or otherwise, keeping me stuck firmly in place. No, no, it was the weather. Not yet, it said, not quite yet.
Dusty Attics and Oases in AZ by Isaac Lorton
As many people did this summer, I spent it on the move, travelling for much of July and August. I am still unsure about large groups and the small indoors, so it is fortunate that I am a fan of long road trips. I loaded up my truck, and drove to the town next to my hometown in Arizona where my grandma lives, staying the majority of the trip at my grandmother’s farm-like house in my mother’s old room, up the head-hardening stairs. For the past four years, my grandmother has lived alone. She has not really gone up the stairs in that time, and she also does not host many guests.
Up stairs, thick layers of dust covered the boxes, and stuff, and things that get lost in attics. There is a bed and a night stand with a lamp snuggled in the slanted corner next to a small, hobbit-sized door that will take you out onto a rooftop deck. As Dawn mentioned, it was hot this summer, extraordinarily hot, and I was staying in an un-airconditioned, dusty upstairs room in Arizona in late July, early August. 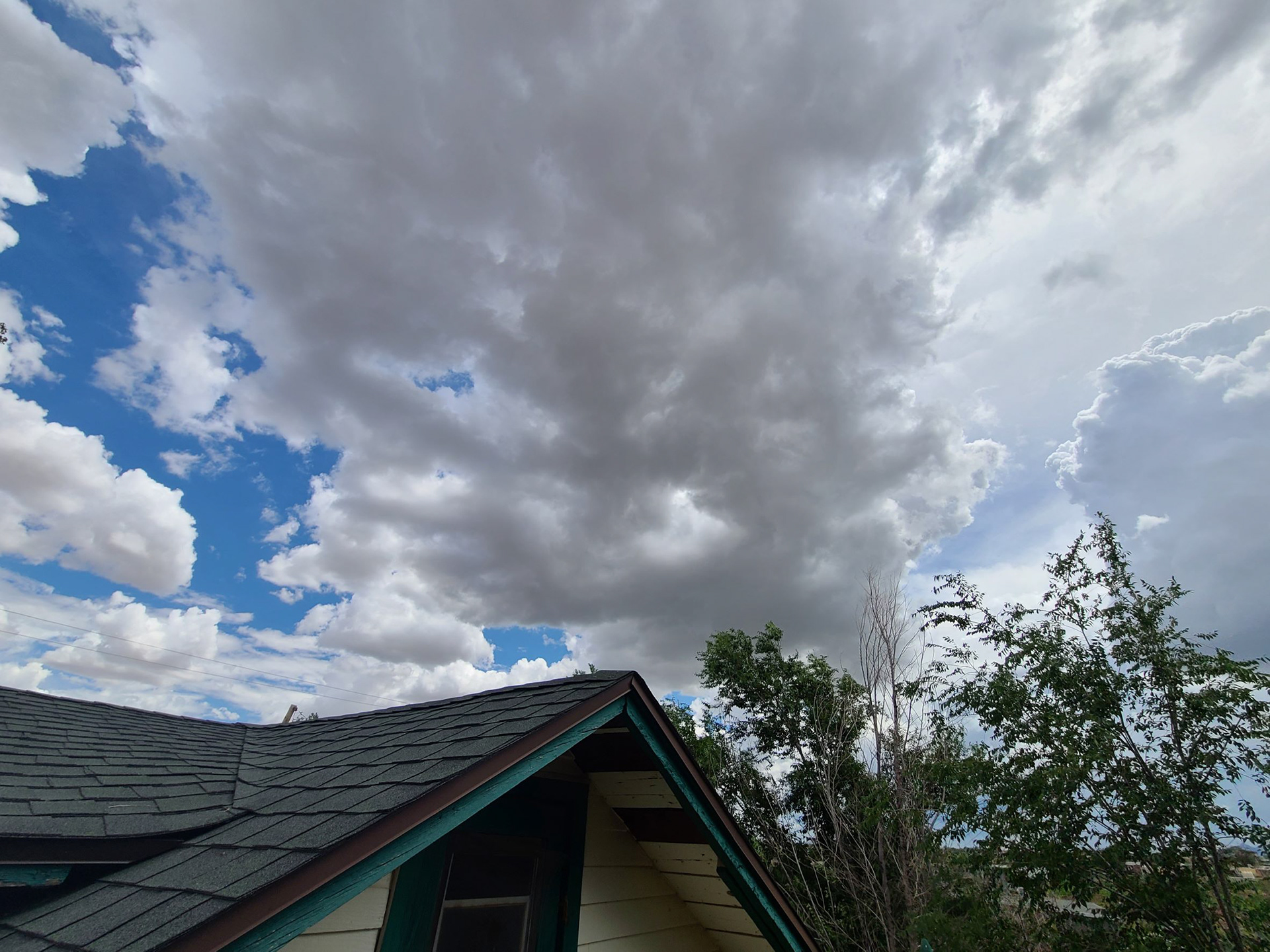 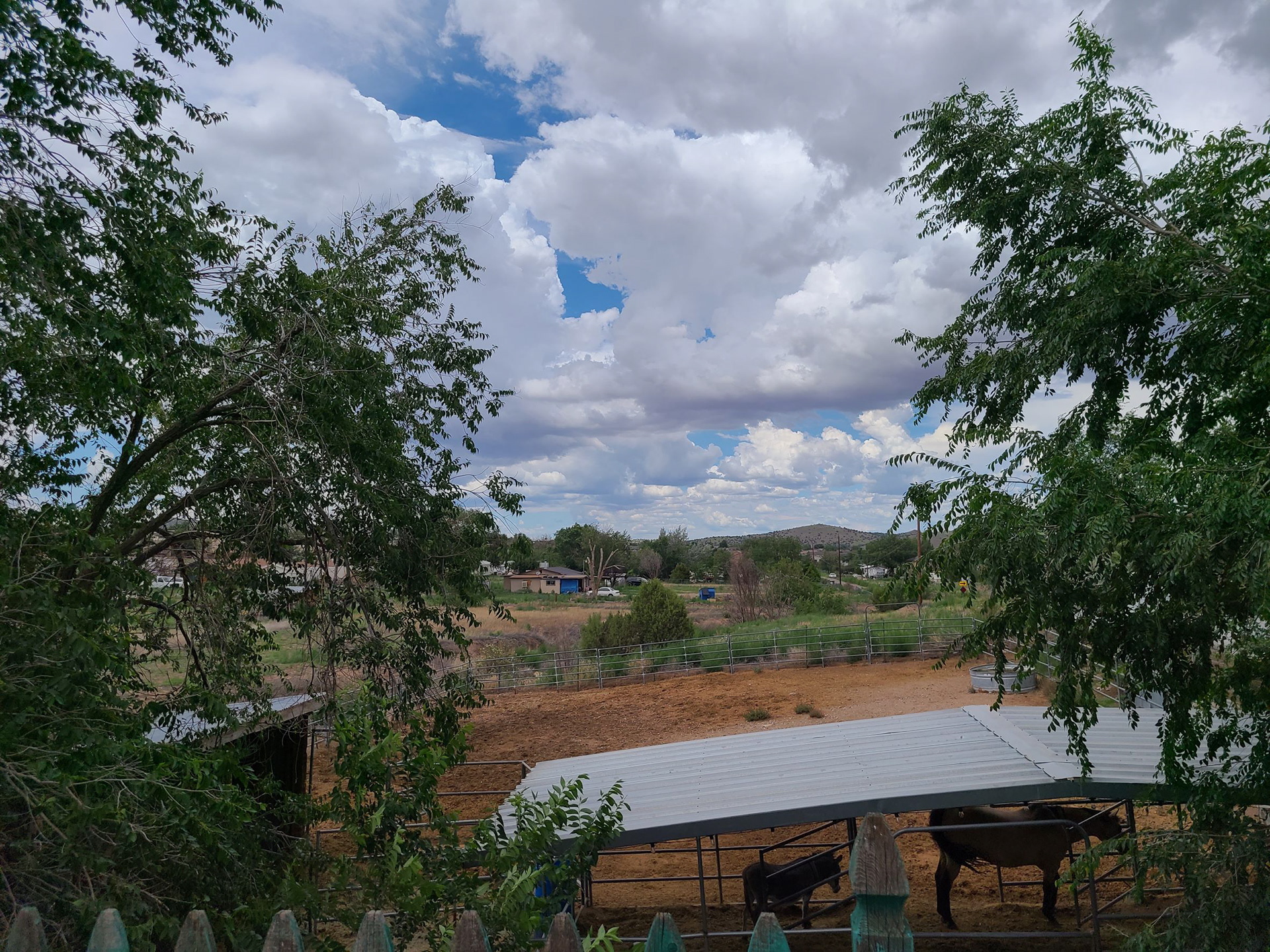 Fortunately for me, this is Northern Arizona, up in a high-desert, mountain valley where it was usually 20 or more degrees cooler than the scorching inferno that is Phoenix (often, what one imagines all of Arizona weather to be like), but still stupid hot because it was a record-setting summer across the U.S. It was a good monsoon season this year in my hometown, though, cooling rain rolling in in the afternoons, whipping through the big open spaces, hurtling through arroyos and down ditches, washing out washes and roads. The thunderclouds breaking on the mesas and mountains all around, at a distance, near; rain hitting over here, and there, but not out here today. Most likely tomorrow. 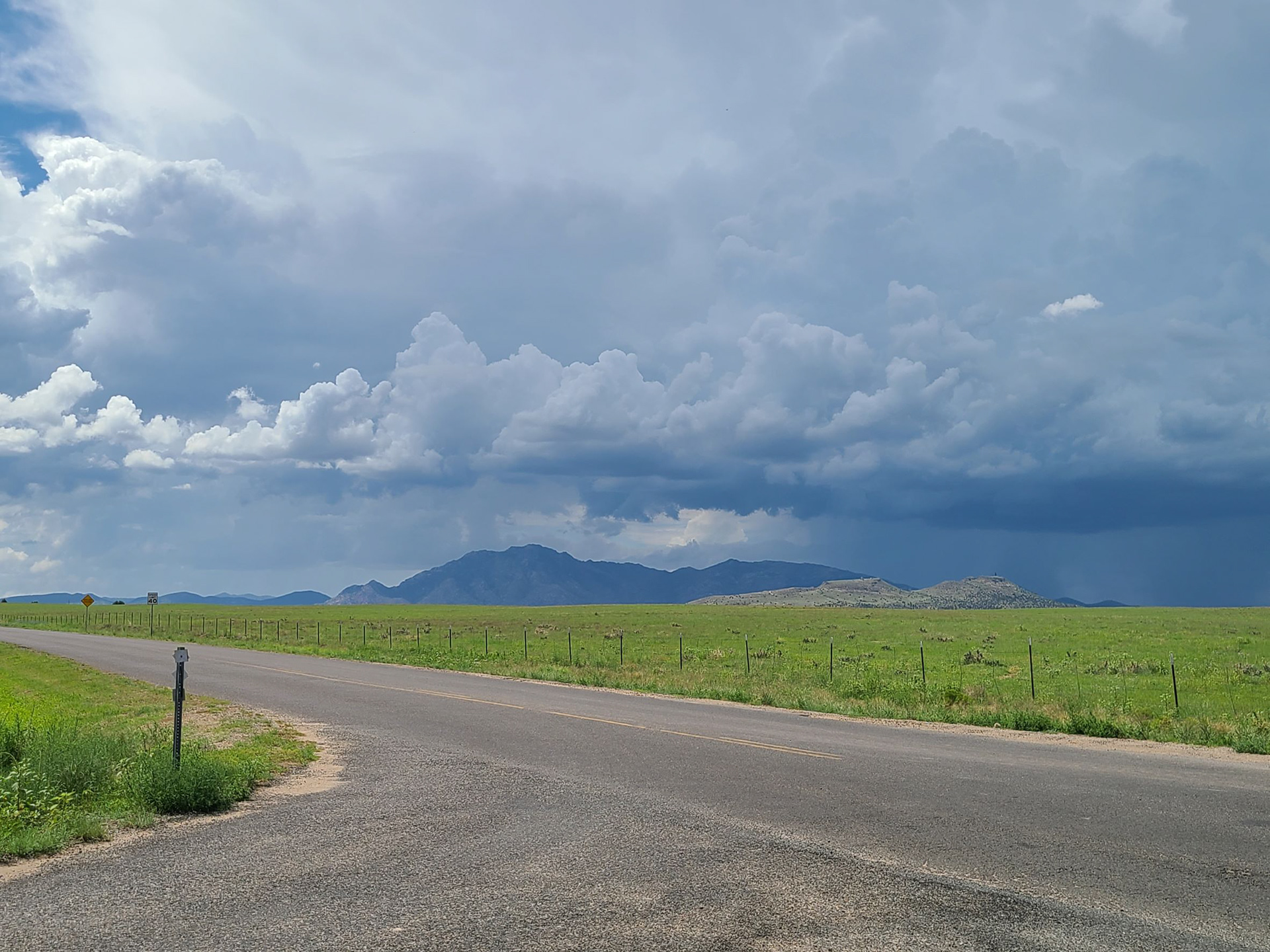 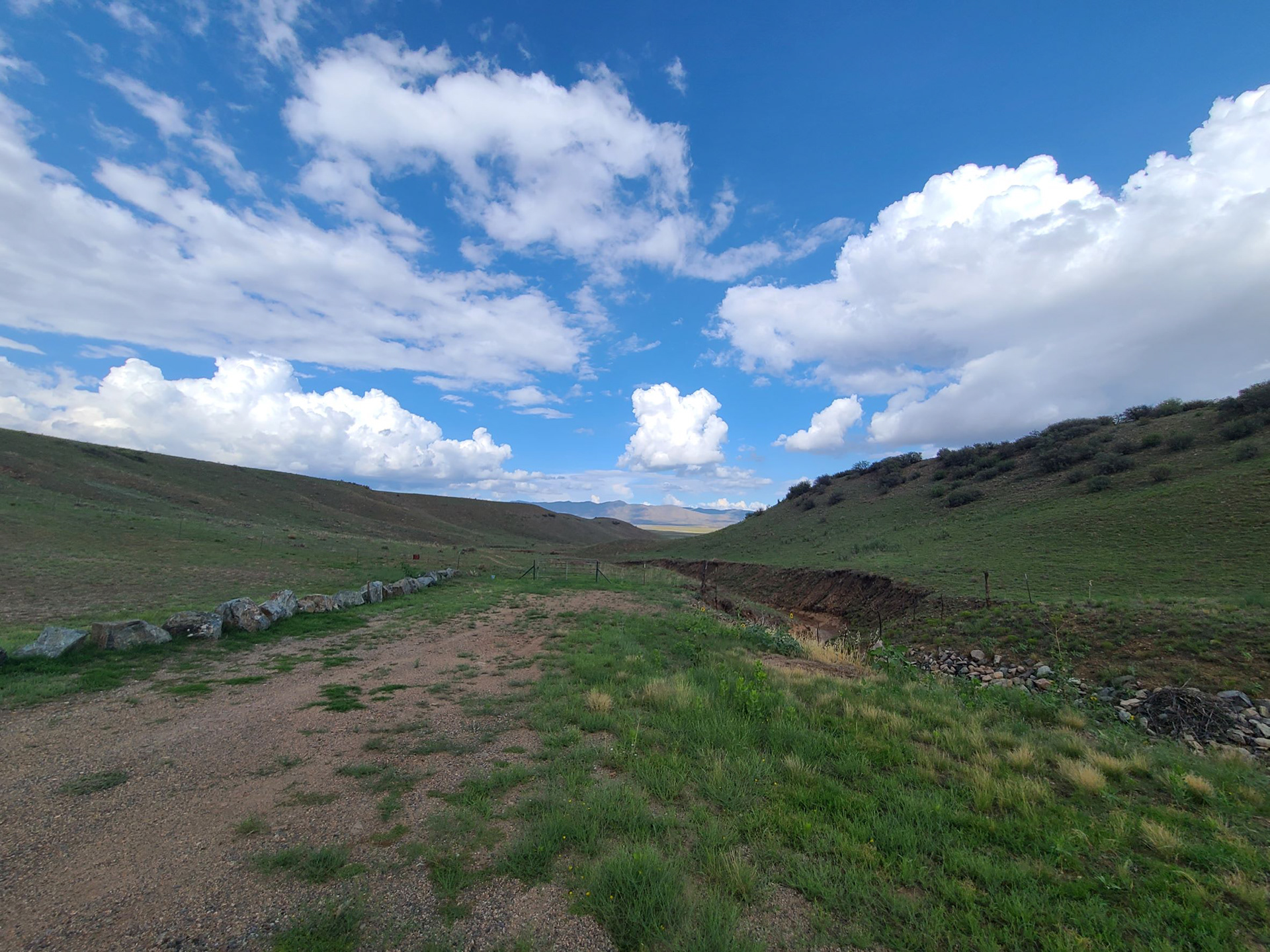 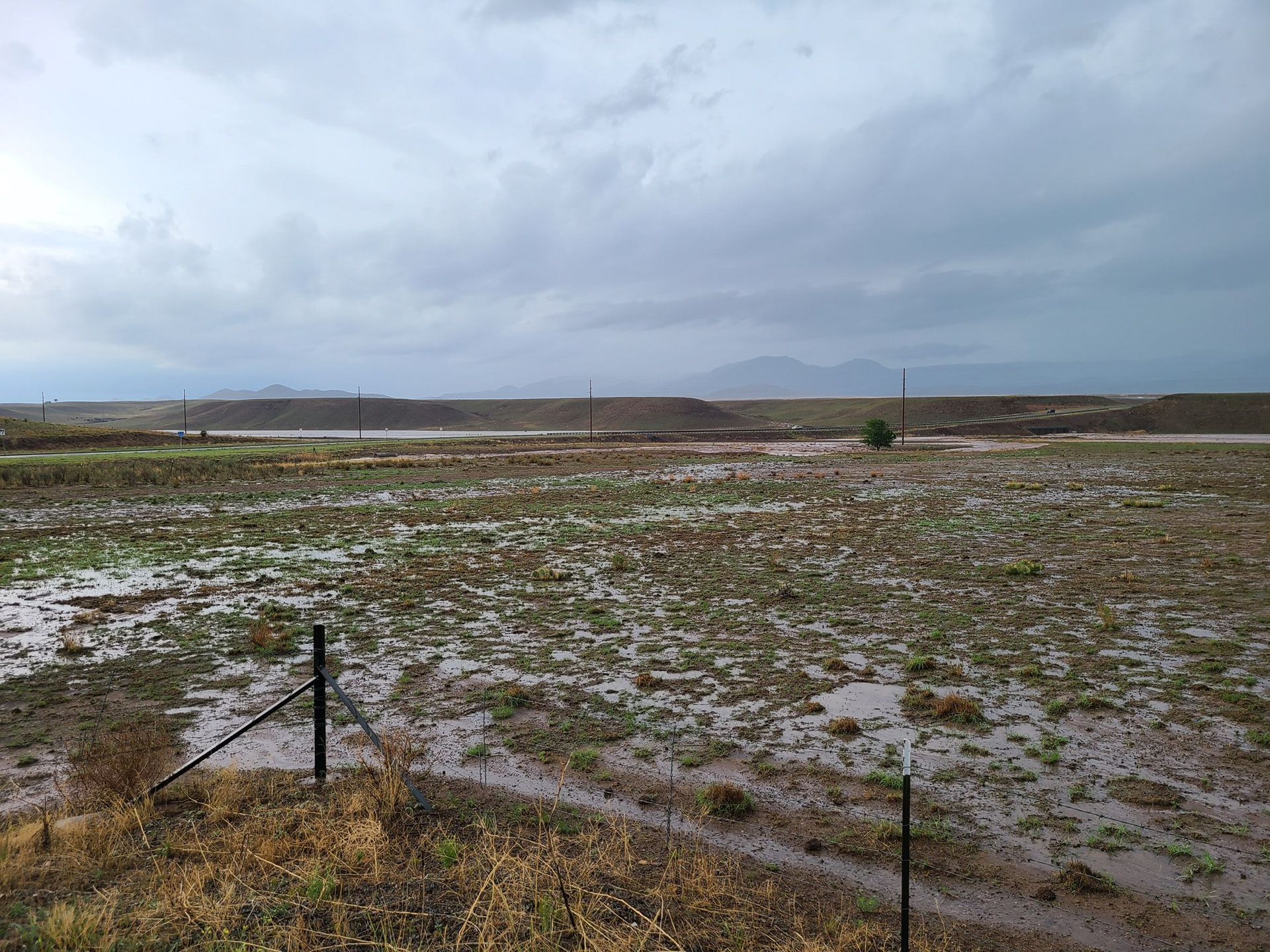 Before the rain, we sat downstairs at the dining room table right across from the window with the A/C unit in it, hoping for the clouds, listening to my grandma’s record collection that had not seen the light of day, or spun since the early ‘90s. I had lugged the big box of a record player unit-of-a-thing on wheels down the tiny, low-clearance stairs. We cleaned it and we were able to get it playing again. We sat listening to my gramma’s and papa’s music collection, and I sat listening to her reminisce about my grandpa whenever a certain song would spark a memory. I wrote and she played Gardenscapes until a new memory struck. Waiting for the monsoon.
When it didn’t rain, those were watering evenings out in the yard. My grandma moving the hose from plant to plant, tree to tree, flowers, vegetables, horse trough, dog bowls, chickens. Her property stays relatively cooler with trees, and bushes, and vines that she has cultivated over the past 40 years. It smells of dirt and honeysuckles. Out in her little plot-of-land homestead—not in city limits, in the county—in a wide mountain valley. The foliage provides a canopy of cover from a beating and blaring sun, while the dry air and wind wick the moisture away from you. Wind chimes. Rain and shine, she continues on.

Hazel-Dawn Dumpert is a longtime journalist who’s written about everything from film and music to figure skating and bald eagles. Her work has appeared in, among other publications, The Guardian, Film Comment, the Village Voice, and Yankee.
Isaac Lorton is a storyteller and is happy to be here in this place at this moment with this group of people. Writing, Photographing, Editing.
↑Back to Top