By Molly Papows​​​​​​​
On a recent drive home from the coast a few hours after a storm, slants of light would occasionally break through quick-moving clouds and illuminate smoke-like curls of snow above the trees. The new powder on each pine needle and branch was so fine it lifted into the atmosphere at the first suggestion of movement. Whole trees trembled and breathed fleeting apparitions of themselves made of amber light and snow, the hills along the Interstate blinking in and out of focus with each shiver of wind like the soft double exposure of forest floors in early landscape photography, the delicate sway of wildflowers stubbornly sumptuous and painterly. 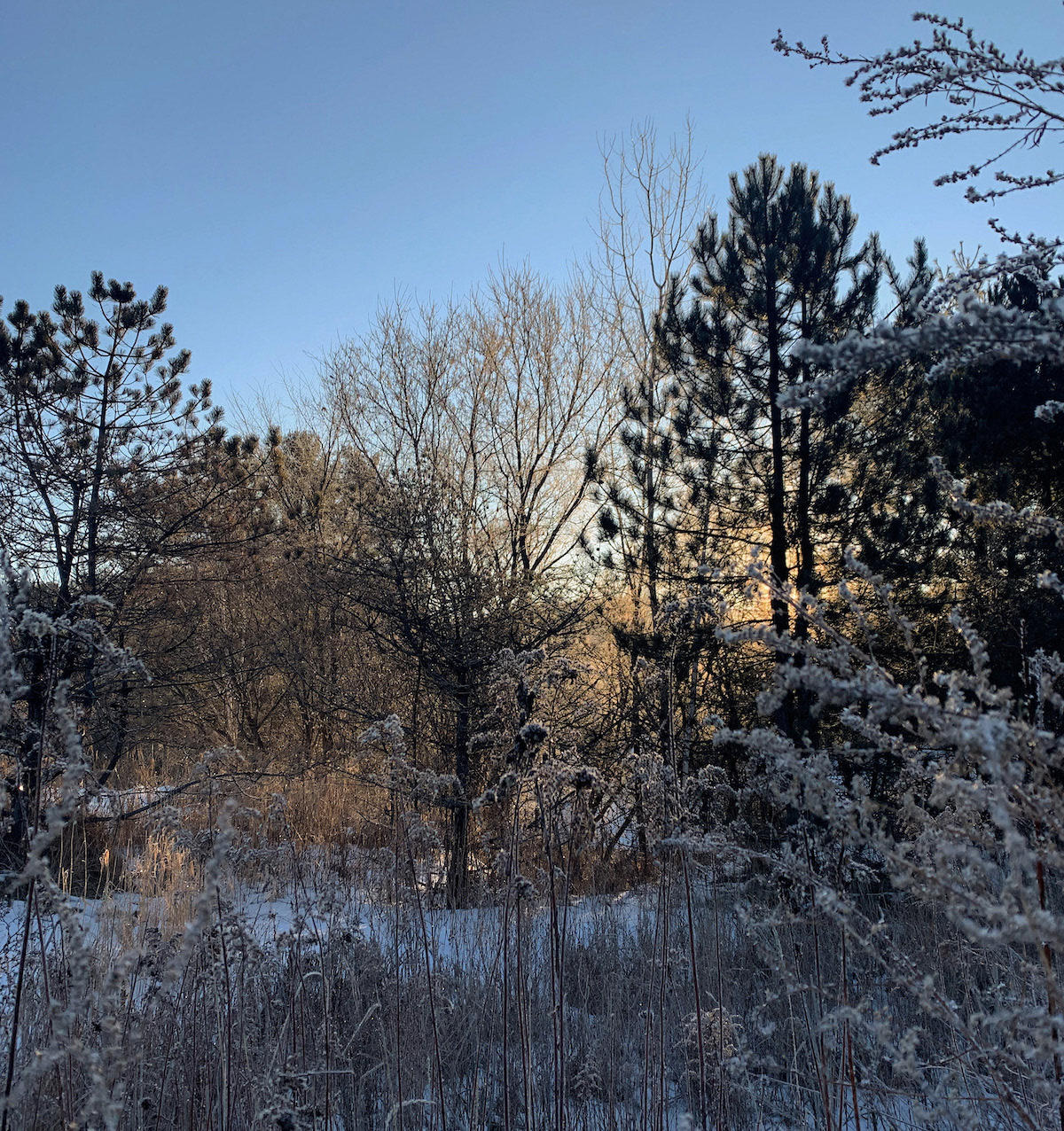 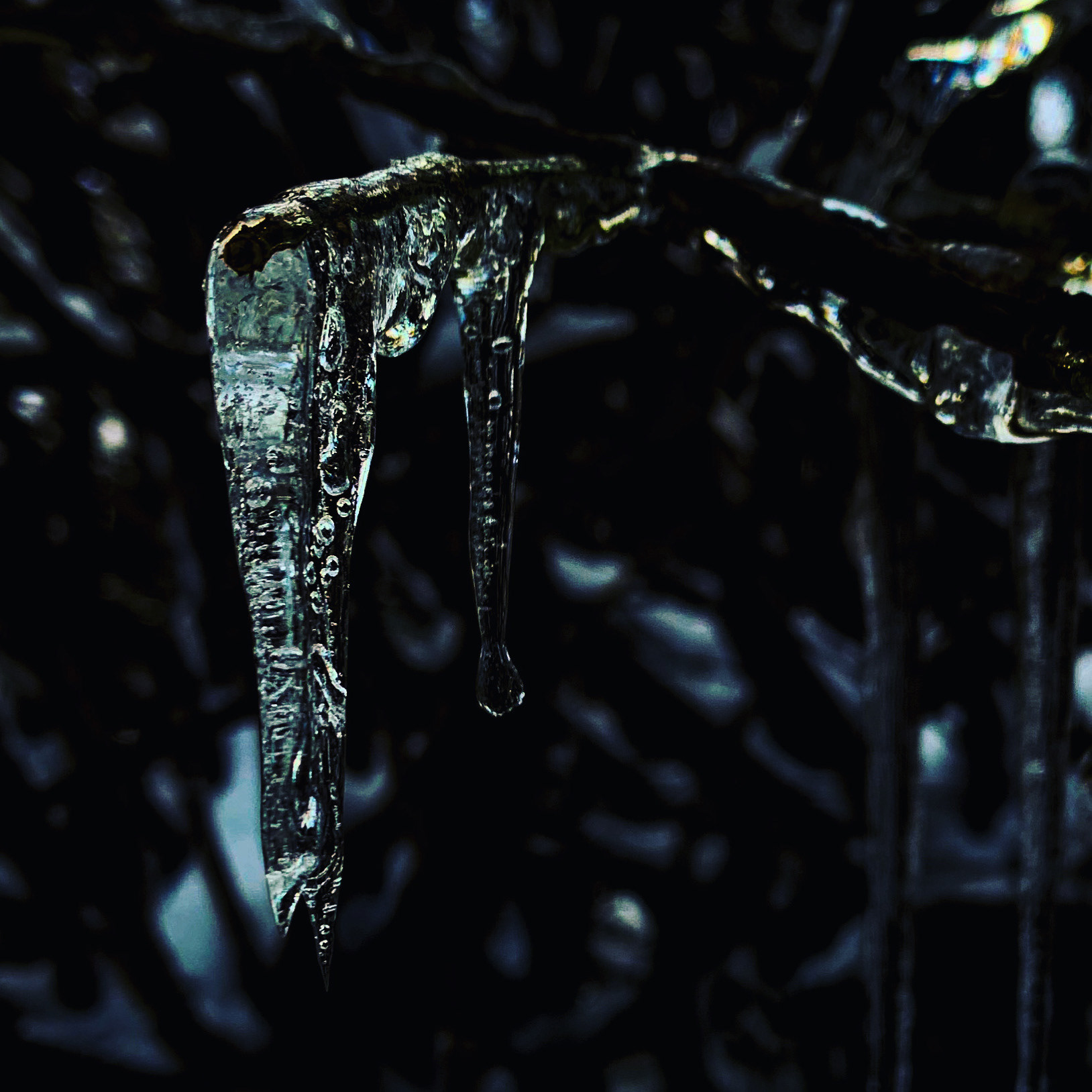 My first winter here there was a morning so cold the air itself appeared crystalized; suspended ice particles reflected the light in such a way that every silhouette seemed haloed in prismatic color. Distances took on new tactility and dimension, and whole landscapes shimmered as I moved. I wanted a word for what I was seeing and turned to my bookshelf. In the first chapter of Landmarks, Robert Macfarlane describes the poetry and possibilities inherent in the Scottish term blinter or “cold dazzle,” a surprisingly solid word for such an ephemeral effect. Every time the temperature dips below zero, I set myself up for disappointment with my complete confidence that the elements will have conspired overnight to create another glimmering, otherworldly haze.
I’m fascinated by the walls of ice that develop along highway corridors this time of year, the mundane movement of groundwater down stone ledges abruptly corporeal and graceful, but also a little wild, some cascades so dense they hold an eerily vibrant shade of blue at their core. I tried to break up a long drive with a quick hiking detour to Mount Kearsage last April, and the lingering traces of winter reminded me of the mountain’s function as a watershed; broad sheets of ice still covered exposed rockface a quarter mile out from the summit, and humbled and more than a little damp after a few failed attempts, I had to turn around. A cold fog clung to the expanses of ice and caught in the branches of surrounding trees. I could hear and sometimes see arteries of water running just beneath the mountain’s molting winter skin.
There are also days when the slow, unending cadence of a New England winter is almost unbearable. But then that steeply angled light throws the land’s hidden movements into relief again: the stories told by tracks in the snow, the orderly and mysterious pattern of frost on the bedroom window, the dark passage of a red-tailed hawk after a heavy snowfall, the repoussé plates of ice forming and reforming over moving bodies of water, like armor. These long months hold all the intimacy and reverence and impatience of the darkroom as a familiar landscape begins to develop, the living edges of things newly articulate and beautiful.
February 2020

Molly Papows is an art historian based in Lebanon, NH. She has an MA in the History of Art and Architecture from Boston University and ten years of experience working in encyclopedic fine art museums. She’s also interested in the many ways an artist can tell a story across disciplines — from fiction and nonfiction to poetry, landscape architecture, and music.
↑Back to Top