Bryan Palilonis is a true Vermont Renaissance man—artist, musician, woodworker, brewer and, most recently, taco slingin’ entrepreneur. In January 2016 he started serving Mexican fare at Caja Madera, a wood-paneled RV parked on Route 15 in Hardwick. A second mobile unit, the brightly-colored Caja Dos, is dispatched to festivals and popular haunts throughout Northern Vermont, including Hill Farmstead Brewery, which is where we caught up with Bryan during his afternoon shift behind the grill.
Why did you decide to specialize in tacos?
Fast food has made us impatient. Everybody wants food yesterday. So, tacos are really fast. You can have everything ready to go—the proteins, the toppings—and I cook the shell right here on the flat top. We always use soft corn tortillas. Also, there really weren’t any tacos in this area before.
Do you make your own tortillas?
We actually found a guy named Dave Chappelle who goes down to Brooklyn to pick up tortillas and Mexican sodas. He stopped by one day, we tried the shells, and they were perfect. The killer part is we get them fresh, next day.
What’s today’s special?
It’s a taco with chicken, pinto beans, and these crispy poblanos, which give it some crunch. Yesterday we made shrimp tacos with Thai peanut sauce. We also had this young woman who pulled up in her Volvo. She grows pea shoots and spinach and sunflower sprouts. She had a huge bag of fresh greens, $8 a pound. It’s great, and it helps with the specials. You throw that on a taco and people are like, “Whoa!” We also do some tacos with plantains—those are lovely. 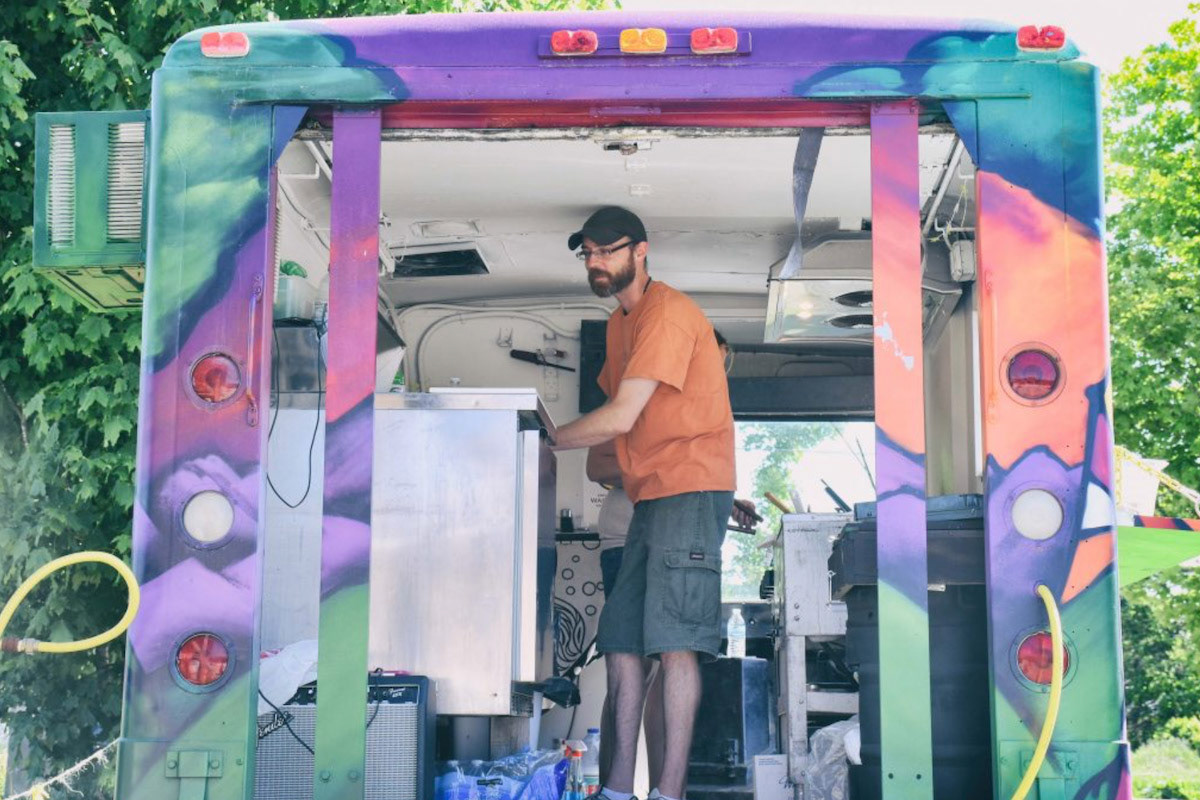 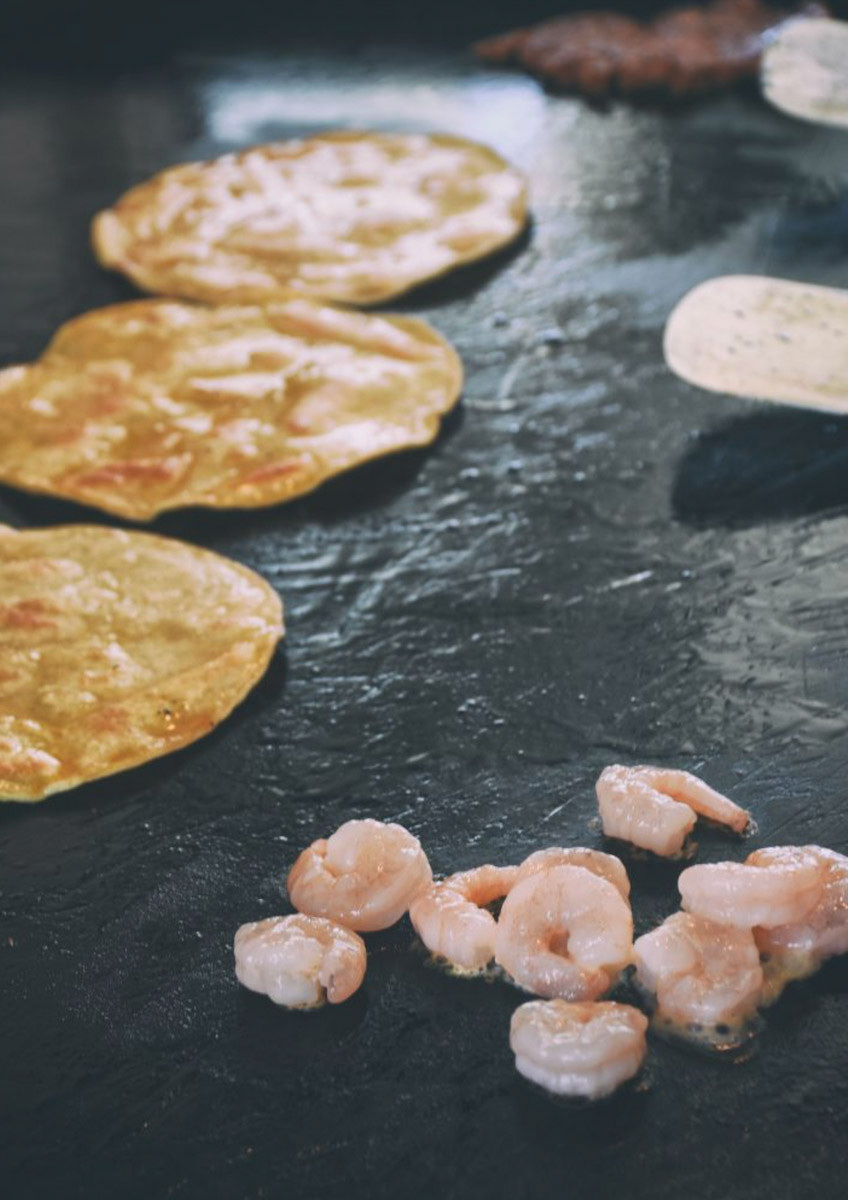 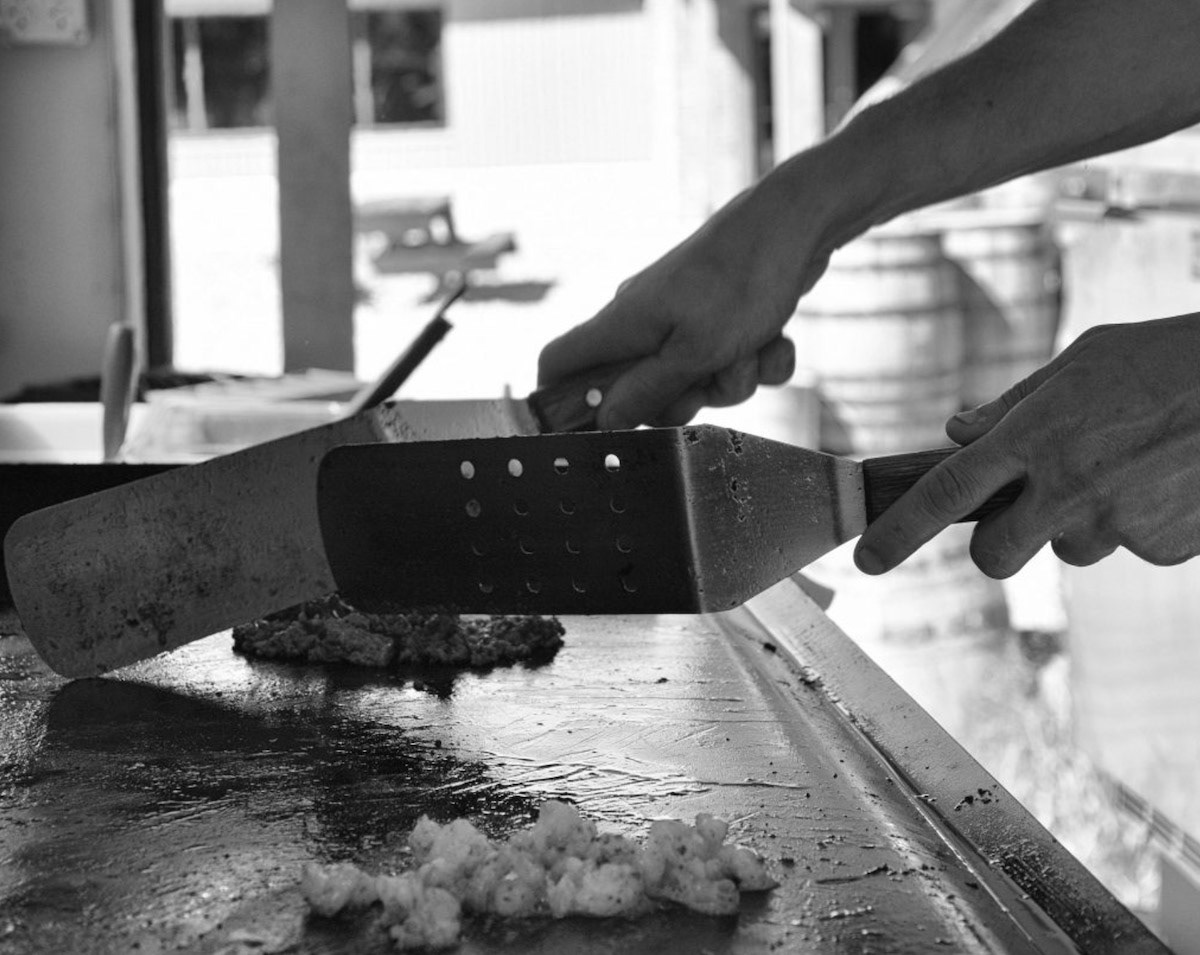 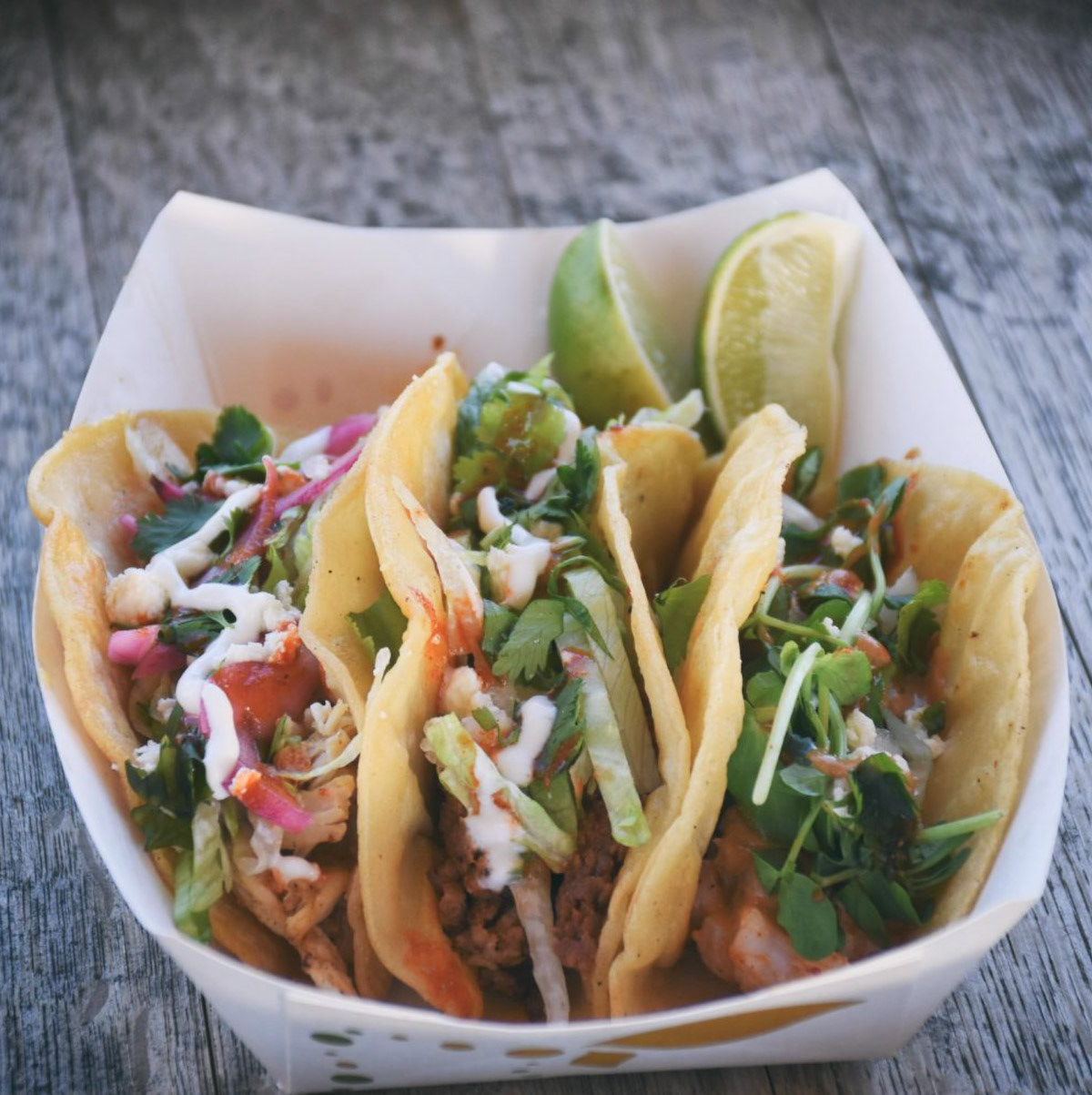 You’ve been open for a few months now—what has been the most popular menu item?
The chorizo taco. I make homemade chorizo. I get the arbols and anchos and guajillos—they’re all dried chiles—and I de-seed them, stem them, and grind them up with a coffee grinder. That’s the backbone for the heat.
Do you use that same grinder for your coffee in the morning?
No, I don’t drink coffee.
What keeps you going during the day?
Running this truck, and a little of that [gesturing toward the Hill Farmstead taproom across the parking lot]. My other passion is beer. I love to have a hard day of work and then drink a beer.
Has the big man stopped by to try your tacos yet?
Every day we’ve been here, Shaun has had our tacos. We tighten up, for sure—his palette is the best. I’m like, “Make sure the cheese is equally dispersed on that taco. Not too much hot sauce or cilantro!” We’re at the best brewery in the world, we got invited here our first time out on the street, and that’s just wicked. We’re lucky to be up here.
This is a great location. How does the arrangement with Hill Farmstead work?
It’s a win-win. Because of the amount of alcohol they’re serving now, by state law they have to have food available. I think they have eight different food vendors throughout the season. This is our second week. We have three weeks in September, and we’re stoked to finish up the season here. After the Fourth of July this place is non-stop.
Where else are you taking the truck?
Next weekend we’ll be at the Green Mountain BBQ & Music Festival in Waterbury. Next month we have Lamoille County Field Days, which is like ten thousand people in a single weekend. The Alchemist is opening up their brewery and I’m trying to get in there…fingers crossed. It’s our first year, so it can only get better. As long as we keep the consistency of the product, the rest will follow.
Why did you decide to start a food truck instead of setting up a brick-and-mortar restaurant?
The overhead. All I’m paying is ten dollars a day for propane plus gas for the truck, which is cheap because I live nearby. I don’t have to pay for air conditioning or electric. It’s tough with restaurants, because the overhead is so high. I looked at a place in Hardwick. The rent was $2,000 a month; the electric was up to $1,500. You’re already $3,500 in the hole before you open the door. I thought about starting a brewery, too—I’ve been brewing for ten years—but there’s so much capital needed to start one up. The taco truck is way easier, you can turn a profit faster, and you don’t need all the space, either. It’s also great because we get here at ten-thirty and we’re done at five. It’s not like a restaurant, where you have to be there from nine in the morning until eleven at night. When we do the festivals we’ll be slinging it all day, but that’s alright because the money will be good.
Where did you find your trucks?
Craigslist is amazing. That’s where I get everything. The camper that’s in the Hardwick location was $1,100. This Caja Dos van was a bit more, but still a good deal. The engine was good, and my buddy Gus helped fix the steering column. I gutted almost everything and redesigned it. I had never run propane or any of that stuff before. I did a lot of research on YouTube.
Do you have to get a special state inspection?
Yeah, we have to pay $260 for the yearly permit. The health inspector comes, and you have to have hot water, a three bay sink, a hand wash sink, and at least a 30-gallon greywater tank, which is underneath the truck. 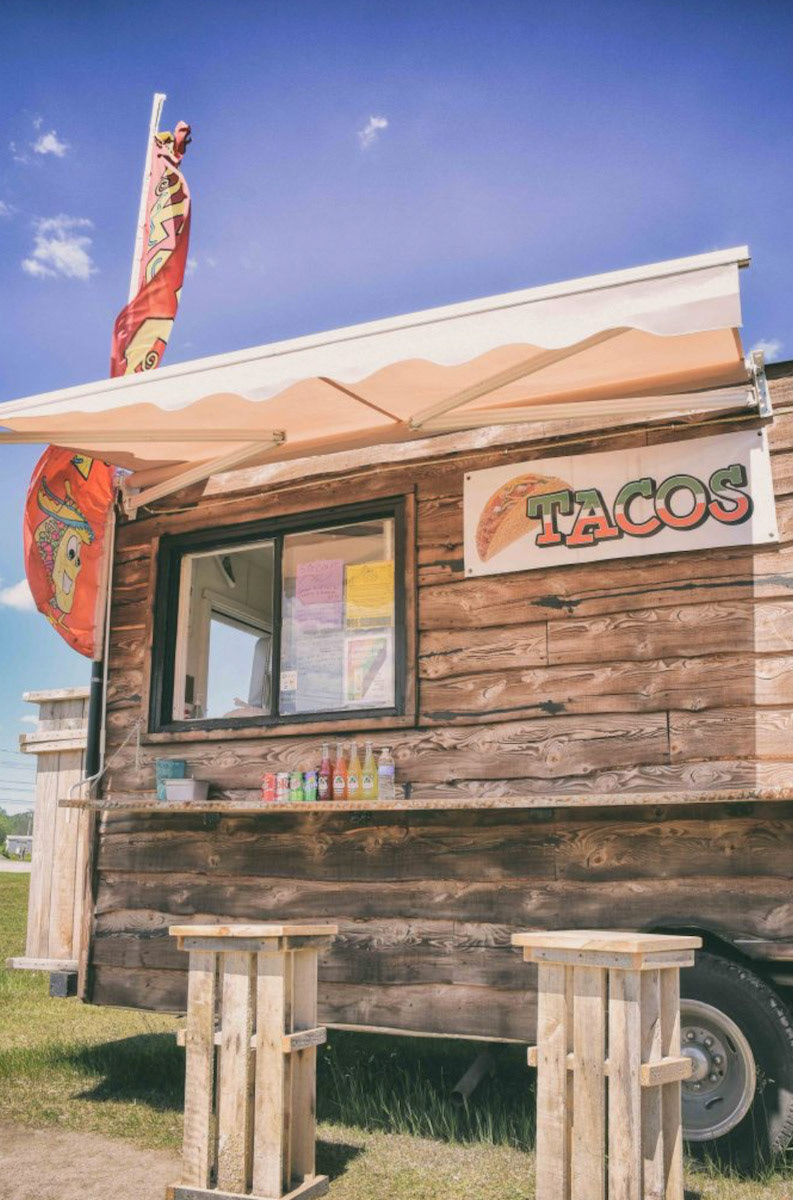 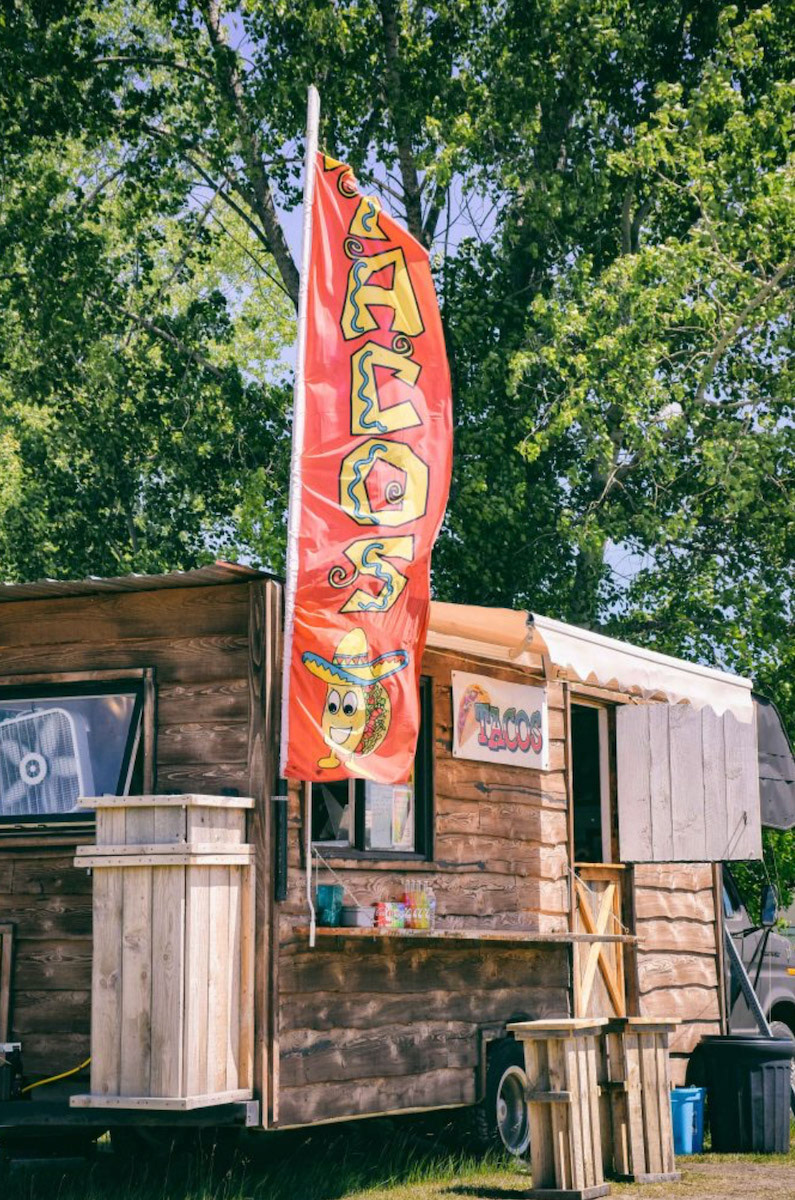 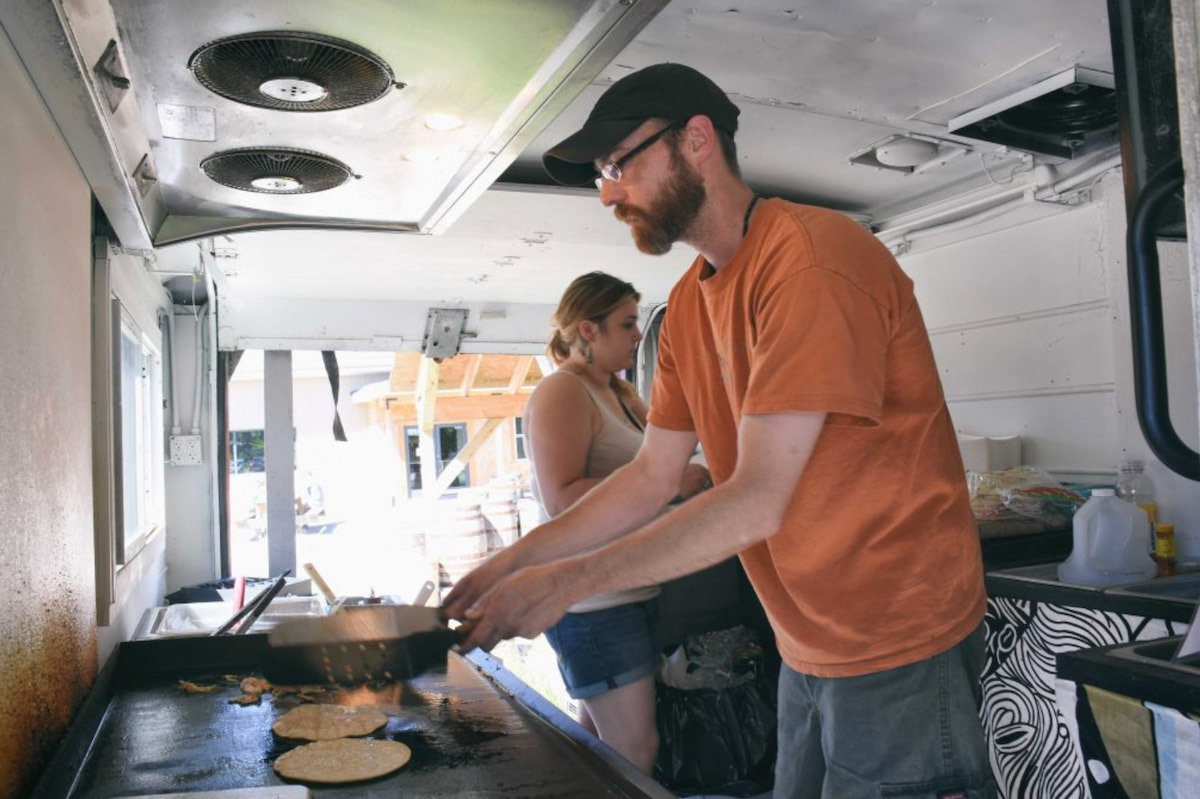 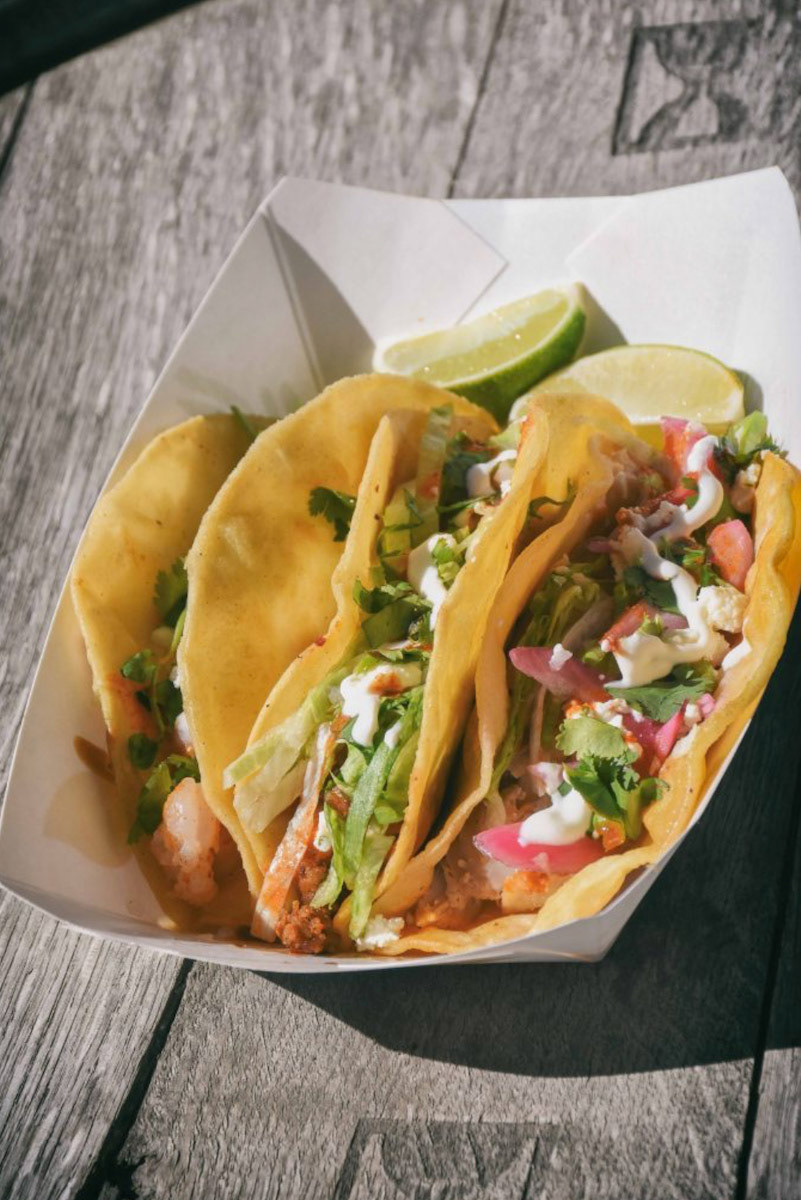 Where did the name come from?
I was looking at the truck while having a beer one night. The truck looks like a box, and it’s wooden, so I just Googled “wooden box in Spanish” and Caja Madera sounded really good.
What are some of the biggest challenges in running a food truck?
Not having power is a huge challenge. We’re lucky because we can plug in here at Hill Farmstead. If things pan out, I’d love to do solar at our other Hardwick location. If not, we’re going to look into getting a pole put in. We have a generator, but we just had one blow up yesterday. Finding power is huge for us mobile guys. Also, we have to put the food in coolers and bring it all home every night, back and forth.
There are so many different ways to make tacos—are there any specific methods or recipes that you follow?
You have to have moisture. I boil the chickens, and the bones hold all the moisture in the meat. With the pulled pork, it’s the same as making barbecue. I season it up, put it in the oven, and cook it overnight at 250 degrees for eight hours. I don’t know if that’s dangerous, but then we wake up, turn off the heat, put in a little water, cumin, salt and pepper, and that’s it. I finish it with some seasonings right on the grill. You also have to have texture. We use a lot of sunflower seeds and pepitas, the pumpkin seeds. I’ll season and roast them at home, then they’re good for a few days. You just sprinkle them on a taco at the end and it’s good.
How did you develop your specific taco recipes?
I learned a lot from cooking in South Florida. There are so many taco trucks down there. Tacos al carbon were the best. They were simple, like chicken, shell, cilantro, onion. I don’t even think they put shredded lettuce in, like we do. Then, the hot sauces. And they always gave fresh lime, so that’s where I got that from. I use Vidalia onions, the sweet ones, because they’re easier to get. I dice them small and they give the tacos that natural freshness.
How long were you cooking in Florida?
Almost eight years. I grew up in a small town in New York, about an hour south of Syracuse, and I went to culinary school at SUNY Delhi. I cooked at IBM Endicott right out of college, then I just bounced around and ended up in South Florida with an ex. I did catering in Palm Beach, I was the head chef at an Irish pub, I worked in Italian and Thai restaurants. We eventually had the opportunity to open a small pizzeria.
I read in Seven Days that you had some turf issues down there.
Yeah, I had a food truck, too. It was a little overwhelming. We had the truck in an industrial park and ran into a lady who told us we were on her turf. I had heard that the mafia in Miami was laundering a lot of money through the food trucks, so we decided to just stick to the pizzeria. The landlord there wasn’t so nice, either, and she wanted more money every year. And we were working 14-hour days, six days a week. It got to the point where it wasn’t fun anymore, so I moved up to Vermont to work at the Basin Harbor Club.
What did you do at Basin Harbor?
I was the beverage manager there for six years. It’s seasonal work, tons of weddings. In the winter I parked cars at Jay Peak. It was great, and you get free skiing. I also worked shifts at El Cortijo in Burlington. I loved Basin Harbor, and my boss was the best, but this last season I had the feeling that I wasn’t learning anything new and it was time to try something else, so I started working on building the original Caja Madera truck.
Your prices are really good—did you make a conscious decision to keep below a certain price point?
Yeah, to start. I did my homework, checked prices for tacos at other restaurants, and looked at the median household income in Hardwick. Even if the tacos are as good as they are, you can’t make them too expensive for people around here. I didn’t want to do that—I’m a blue-collar guy. It’s okay because we can charge a little more at the festivals, where people are coming from Boston or New York and they’re used to higher prices. It’s not a secret, everybody knows the money is at the festivals—that’s where the people are.
I saw on Facebook that you’re holding open mics at the Hardwick location.
Yeah, last night was the first one. We had a struggle with the generator. The turnout was okay, and we invited Backyard BBQ to set up their food truck, too. I sang a couple songs at the end: “A Change is Gonna Come” by Sam Cooke and “Boots of Spanish Leather” by Bob Dylan.
What do you enjoy most about running the taco truck?
The best part is after people eat, because you get to see their reaction right away. We’re just getting started on the circuit, and already so many people are so happy. It’s amazing. When you go home, it makes you feel good. That’s life.

Visit Caja Madera at 154 Route 15 West in Hardwick, Vermont, and find out where Caja Dos will appear next by following them on Facebook.