When Wilder resident Matthew Mazur was in his early 20s he couldn’t find a local zine to publish his cartoons and jokes, so he decided to start one himself. Eleven years—and nearly as many bands—later, his DIY publication Oh You! is going stronger than ever. We caught up with Matt at Tuckerbox in White River Junction to look back on the development of his zine as well as the evolution of the Upper Valley punk scene.
So you’ve just published your 10th anniversary issue?
It’s technically the 11th. I was going to put out the 10th anniversary edition last year, but I had a brutal year at work. I always miss my own deadlines.

Was Oh You! affiliated with a local music scene when it started?
There was a very good scene here when the zine came out. There were bands from pretty much all the surrounding towns—Hanover, Lebanon, Hartford, Windsor, Thetford. Each of the high schools had their own cliques, and they finally all converged. During my senior year there was a show at Octaves, which used to be in the Staples Plaza in West Leb. Octavian, the guy who ran it, would let bands set up in the parking lot to play for people. River City Rebels and The Food Stamps played there, and there were representatives from all over the Upper Valley—people who were just starting their own bands. We didn’t know it at the time, but it was sort of the whole catalyst for the scene.
Were you playing in a band back then?
In high school I’d just write random songs on guitar, with no lyrics. I talked to the guys in The Food Stamps at the Octaves show. They needed a bassist, so I ended up joining the band.

How did you get turned on to punk?
My friend Kevin gave me a tape in high school. One side was Short Music for Short People, and the other side was a mix of songs by Screeching Weasel, Ash, Op Ivy, stuff like that. Once I got that tape, that was it. And one of the shows that inspired me to play music was when this ska band called McAsh was at the Tunbridge Fair. It was awesome. My favorite song was “Brendan Stole My Cows,” and I remember my severe disappointment when we bought the CD. It turned out that the song’s name was actually “Brendan’s a Cocky Bitch.” They had toned it down for the fair.
Did any bigger bands ever come through town or did you have to travel elsewhere for shows?
There were big scenes in Burlington and Rutland, so we would drive out there, and then later a big scene started up in St. Johnsbury. One of my favorite places to play was the Ludlow Teen Center—it had a skate park and pizza. We would also get invited out to Maine and other places in New England. For some reason these kids in Ellsworth, Maine, loved our band. We went out there to perform, and they were so enthusiastic. So we’d drive six hours, play a show, drive home, and go straight to work in the morning. It was great.
How has the scene changed since you started playing in bands and putting out the zine?
It’s really hard to get shows together these days because everyone makes you pay, which is legit. These places have to continue operating and, in order to do that, they have to charge to rent out the space. It’s a liability. When we were all young there were a lot more venues, and people were more inclined to give us free shows. Now, without the Main Street Museum, I don’t know if we would have a place to play. Most other places charge a lot more than they do. Most of the activity today is in Windsor with WHAT DOTH LIFE.
How many bands have you played in?
Counting the more serious ones, I think I’ve been in 12 different bands. There was The Food Stamps. Then Bombs Away. We would play at some of the Legions. We played at Hanover High School twice, and we got kicked out twice—our lead singer liked to say dumb stuff. Then Forferd Meg, which was a black metal band. We used Google Translate to come up with the name. I got the chance to ask Bente Torjusen, who just retired as head of AVA art gallery, about the name. She said they were both Norwegian words, but together they mean absolutely nothing. What else? The Dead Rats, the Yarbles—I joined them well after they started. I was in Portrait, then the Cupcakes, which turned into Real Life Time Machines. That took up a big chunk of time, because everyone in the band lived in Boston and I had to bus down there. Law Abiders and Sci Fi Forest are some of my most recent ones. I know there are a couple others...
Tell me about your current band, Caring Babies.
That started during the Real Life Time Machines era. It was difficult being in a band that I had to do so much traveling for. I kept wanting to do shows up here but nobody in the band wanted to. I was also writing all this weird music that didn’t really fit anywhere else, so I decided to start a one-person band.
What about the puppet bandmate?
Redgei—she’s the main driving force behind the band. She does all the computer stuff, all the music. 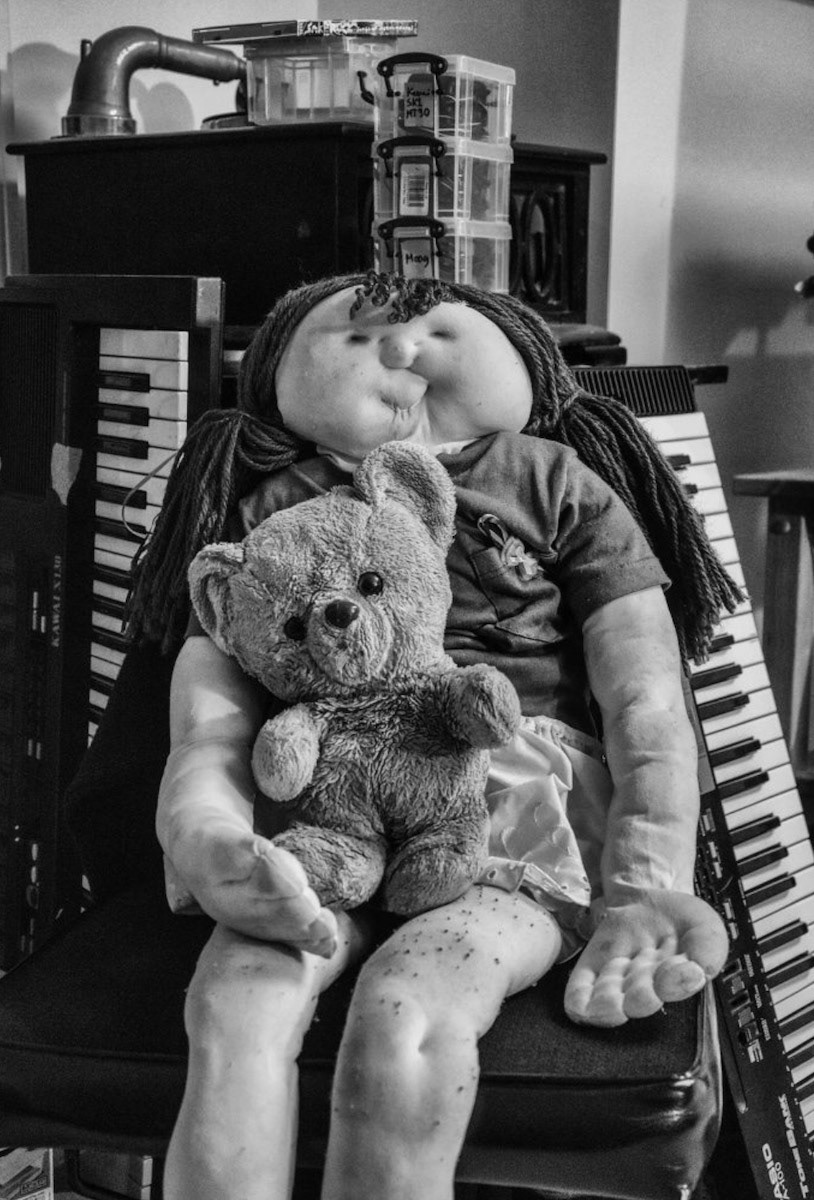 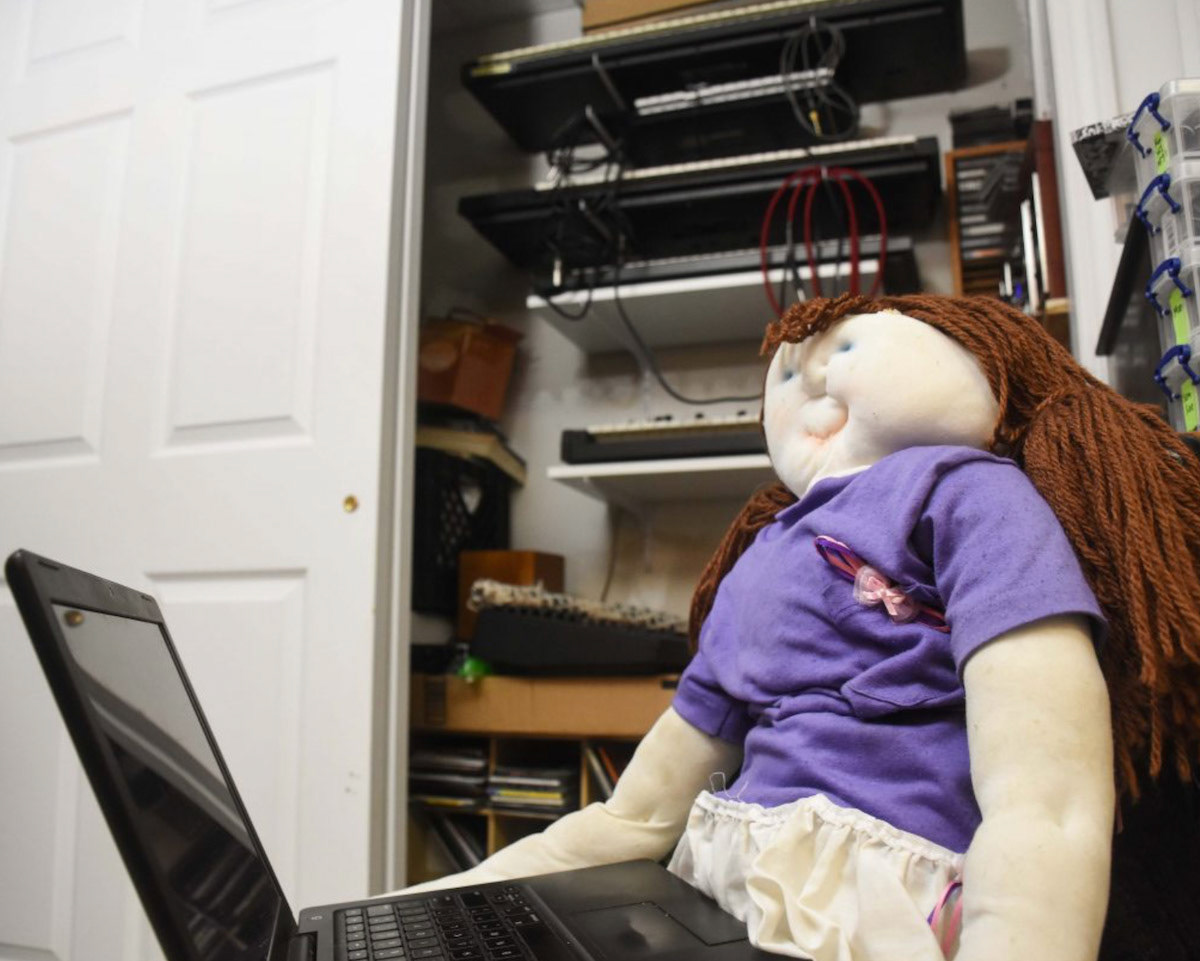 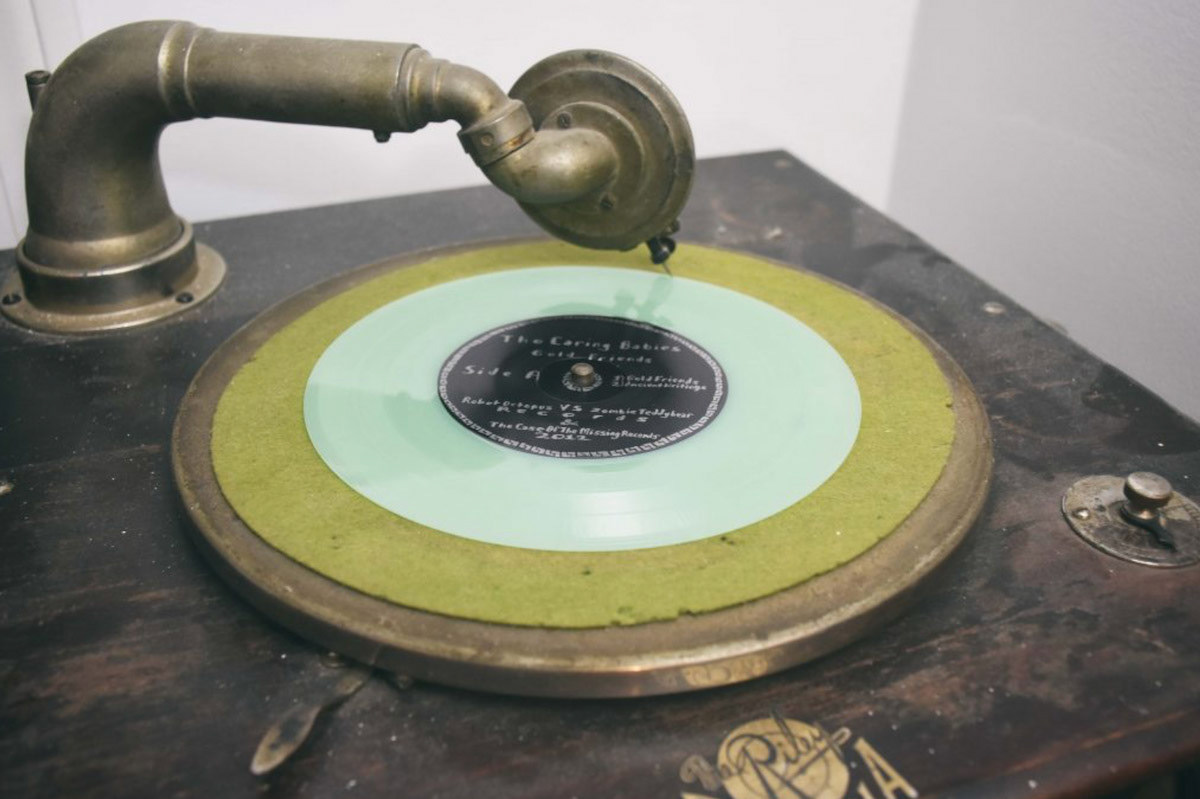 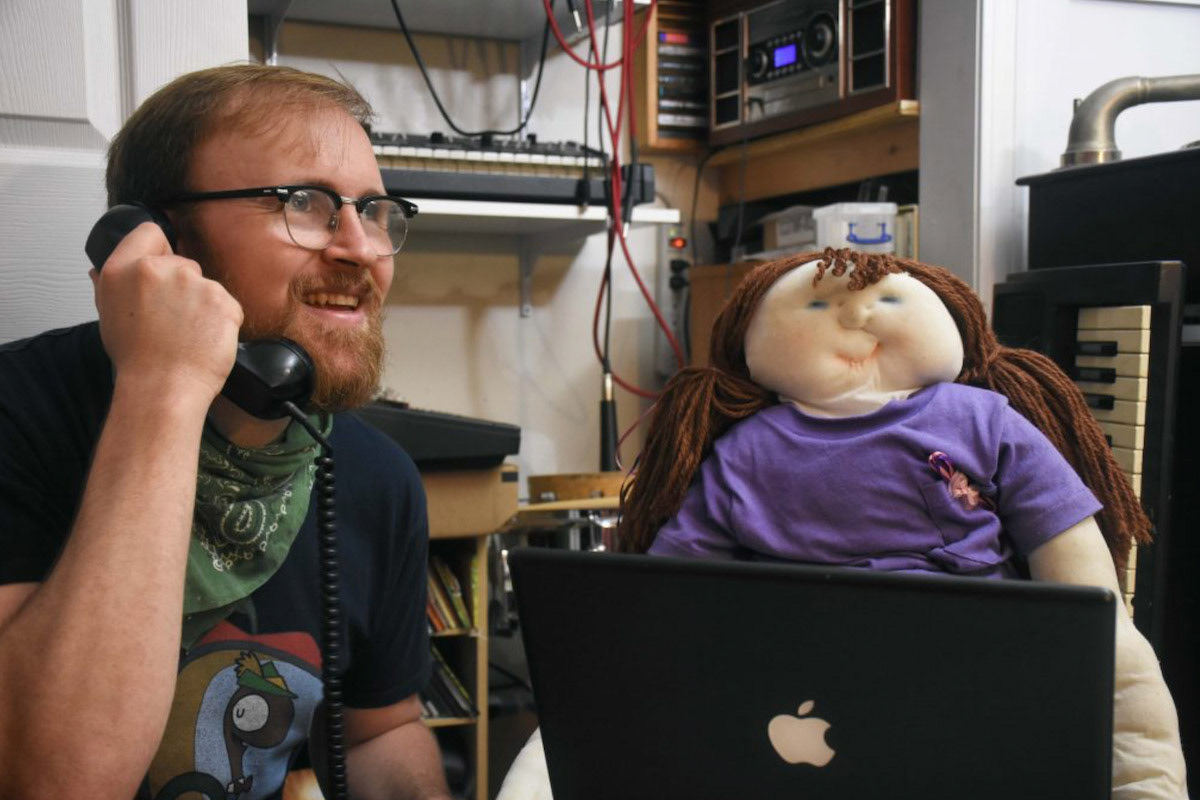 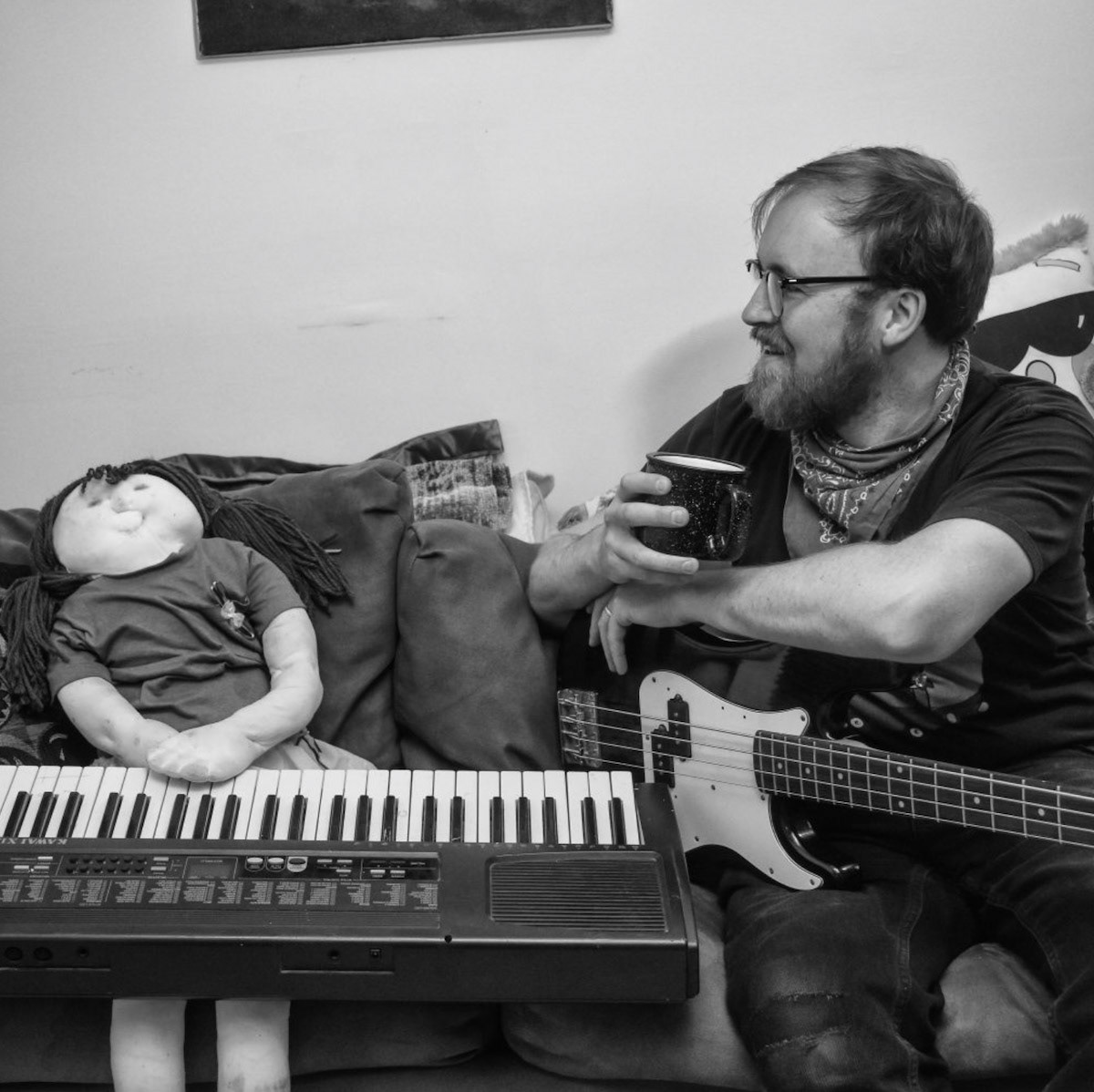 The Caring Babies videos look like Mr. Showdoing a take on Wesley Willis.
I take that as a huge compliment. You know, everybody’s trying to be edgy these days. I don’t want to be edgy.
You’ve definitely got some moves in those videos—have you always been a big performer?
I’ve grown into it. I definitely think the punk scene made it possible for me to do everything that I’ve done. There’s this confidence that it instilled in me, and it just brought me out of my shell.
What do you do in your day gig?
I work in the bulk department at the Hanover Coop, pouring oats and rice and grains and granola into bins. The people I work with there are the best. I know that sounds corny, but they got me through a rough year when the coop was being renovated. I have a serious aversion to chemicals, and we had to deal with welding fumes and lots of horrible particulates all over the place.
Your bandana must have come in handy.
Oh, yeah. I’ve worn this since my days at Dan & Whit’s. It was just a dusty environment there, and the people I hung around with would wear bandanas, so I emulated that and just kept it going. 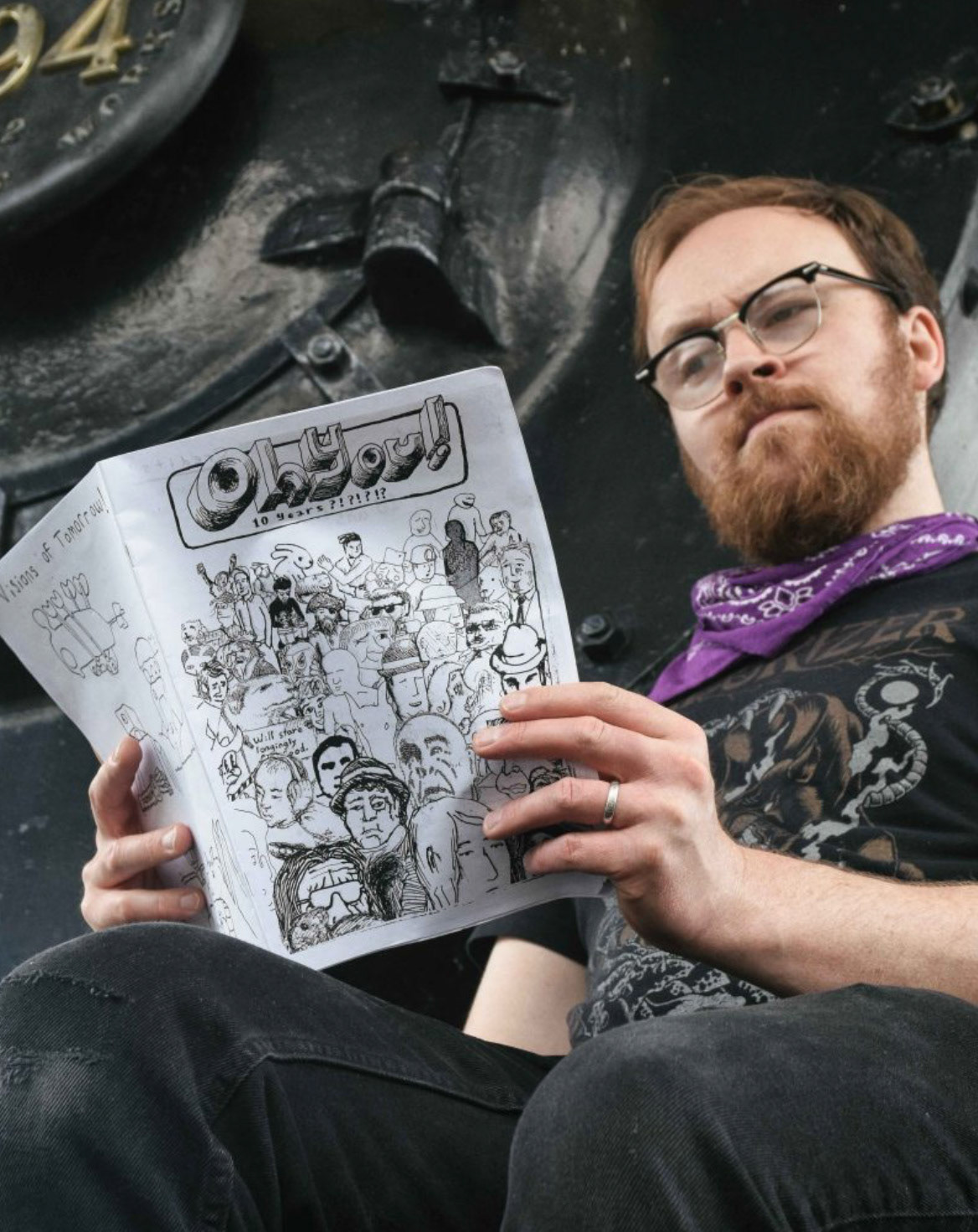 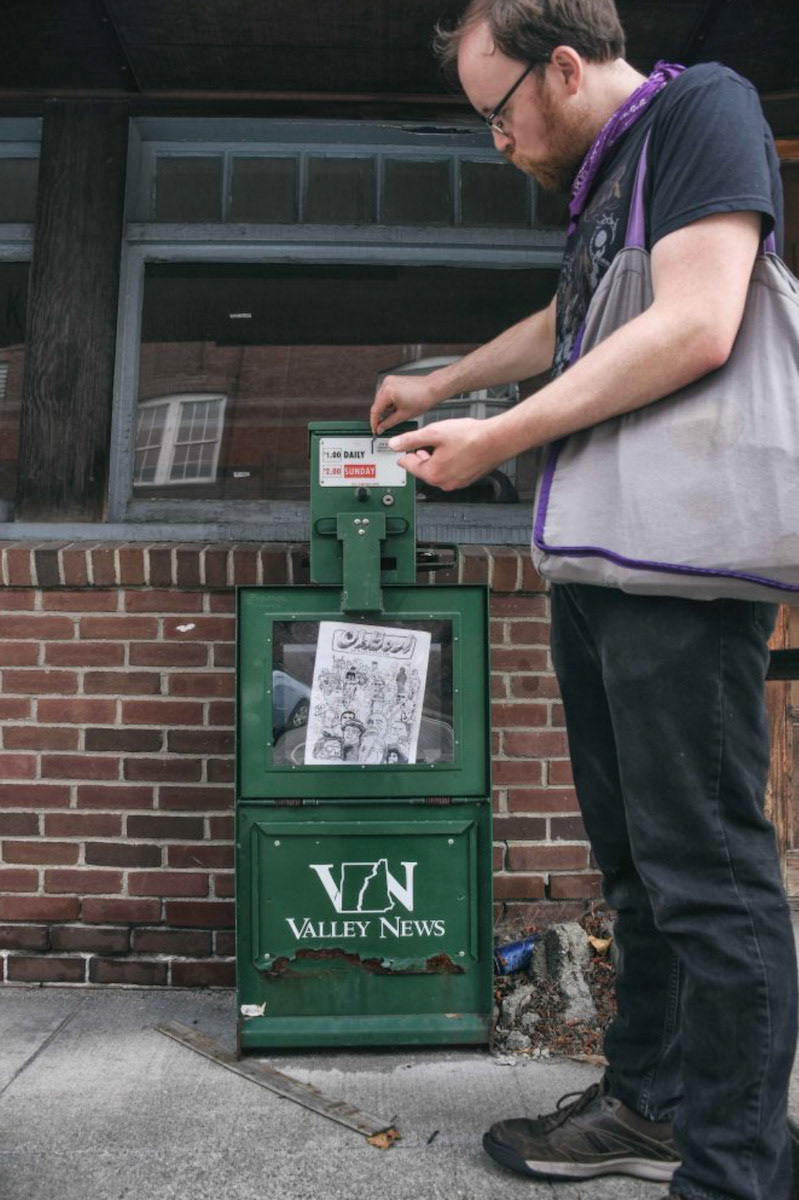 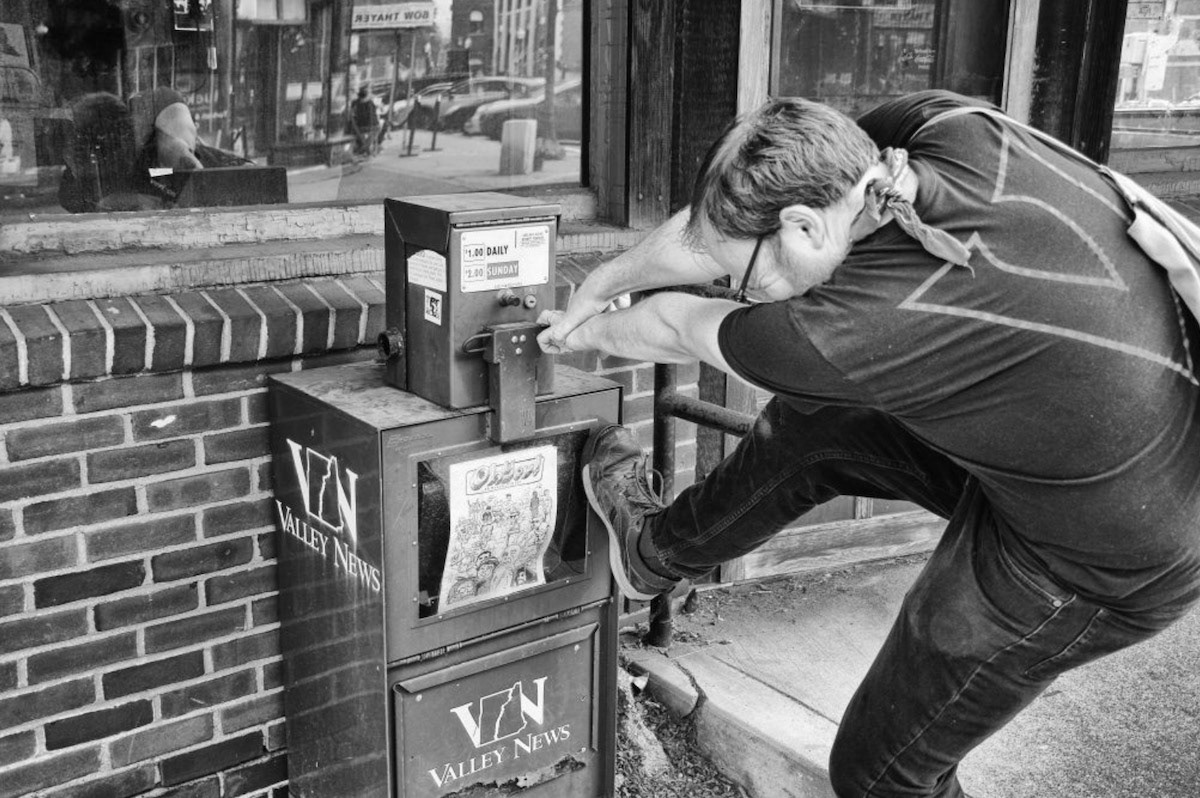 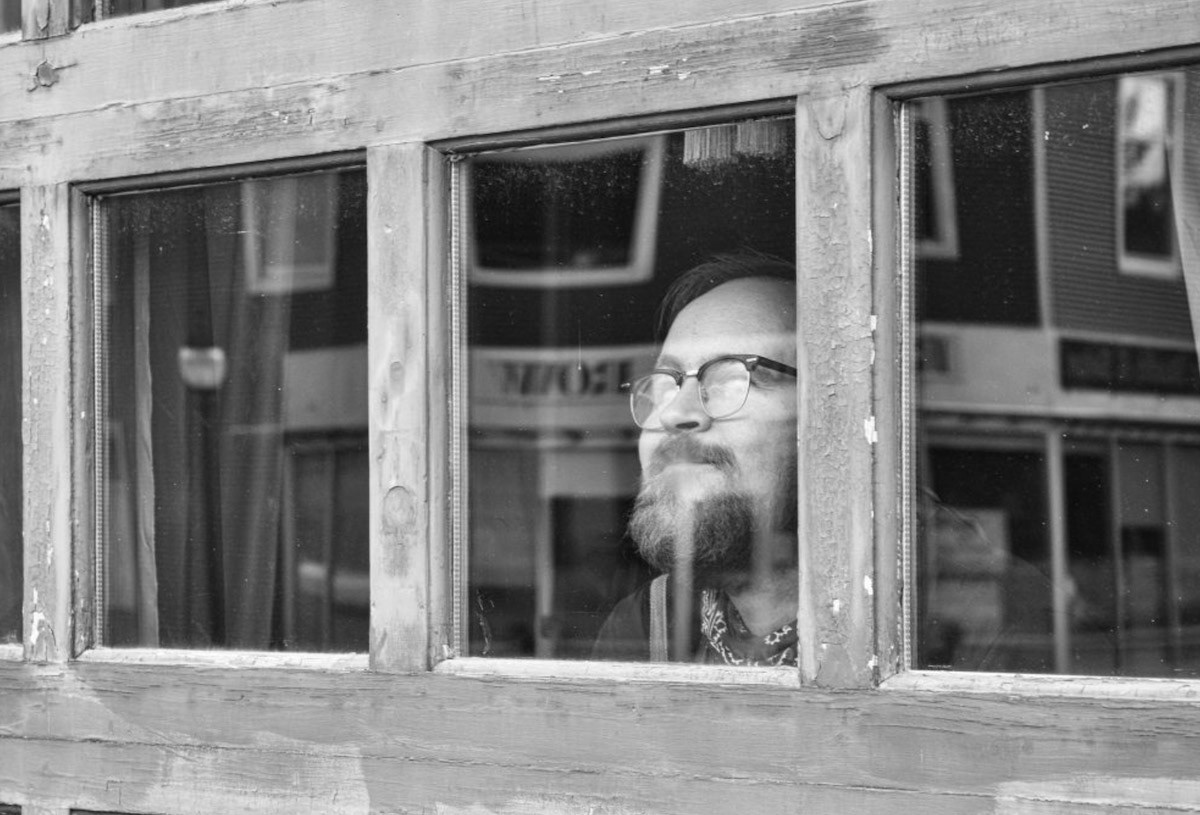 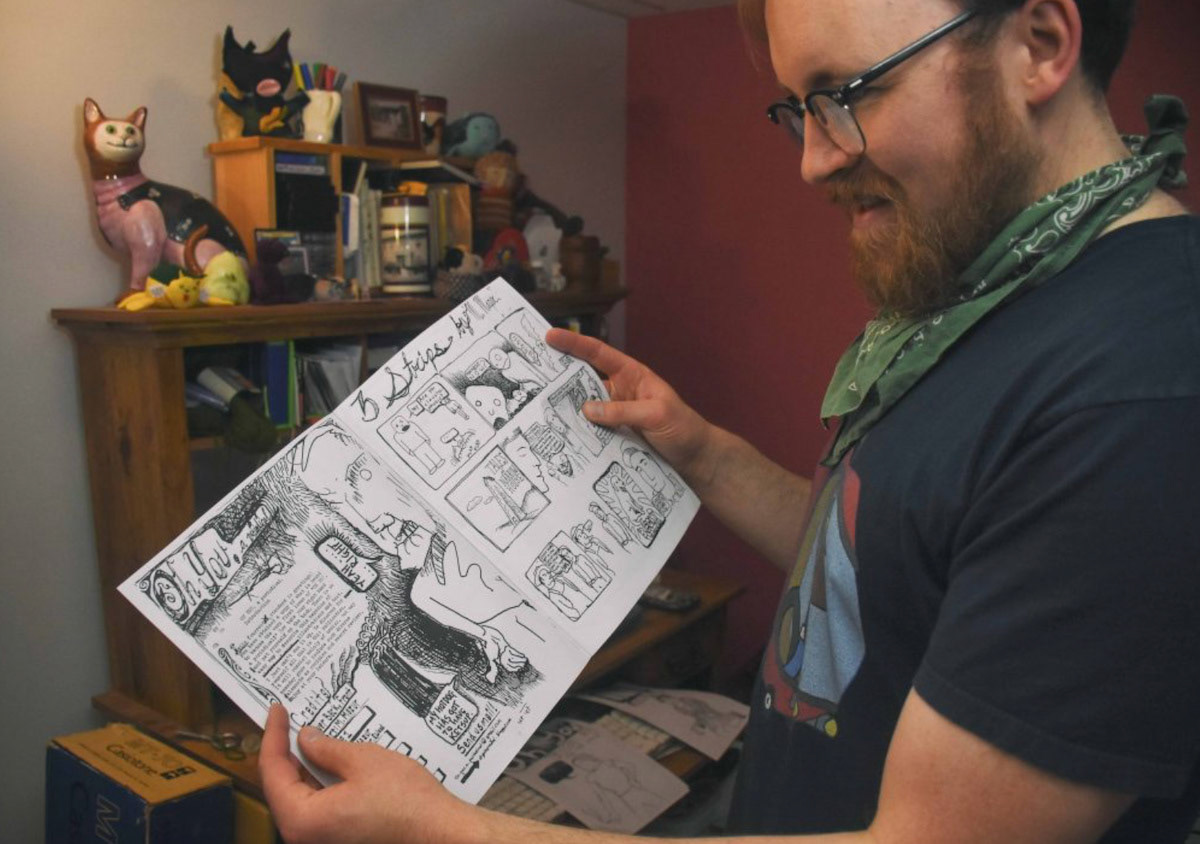 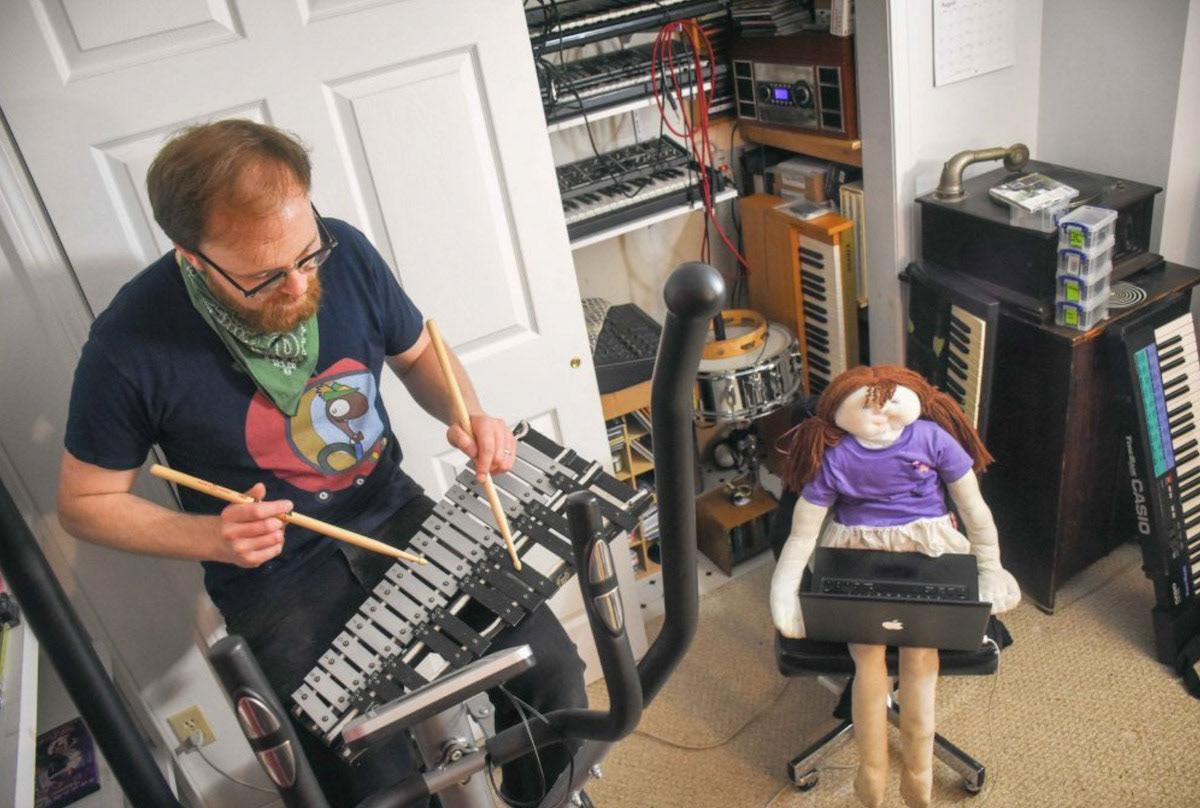 Were there other zines or publications that inspired you to start your own?
It’s weird, there actually weren’t. I knew that zines existed back when I started Oh You!, but I didn’t really have a lot to go on. Flyers were definitely an inspiration—I’ve always loved those. And I was in the Smashing Pumpkins fan club. They would send out these fan club letters, sometimes tapes, and that was really cool. I’ve just always liked the black-and-white photocopy aesthetic.
Are there any underlying themes or principles that guide the production of the zine?
The main idea is that there’s no joke at anyone’s expense, if I can possibly help it. Sometimes I have to tell contributors that I can’t publish what they’ve sent in. I want my grandparents to be able to read the zine. There are also things that I find amusing, sometimes just terrible puns, and there’s not a conventional way to get it out there besides the zine.
Do you put everything together by hand, cut-and-paste style?
I’ve just recently started doing things on computer. I used to do all cut-and-paste and photocopy, up until issue 10 or 11. Some of the first drawings I actually did on cardboard at work, and then I photocopied them later. I’ve seen the light about computers, and I’m past my insistence that everything must be much more difficult for me than it needs to be. 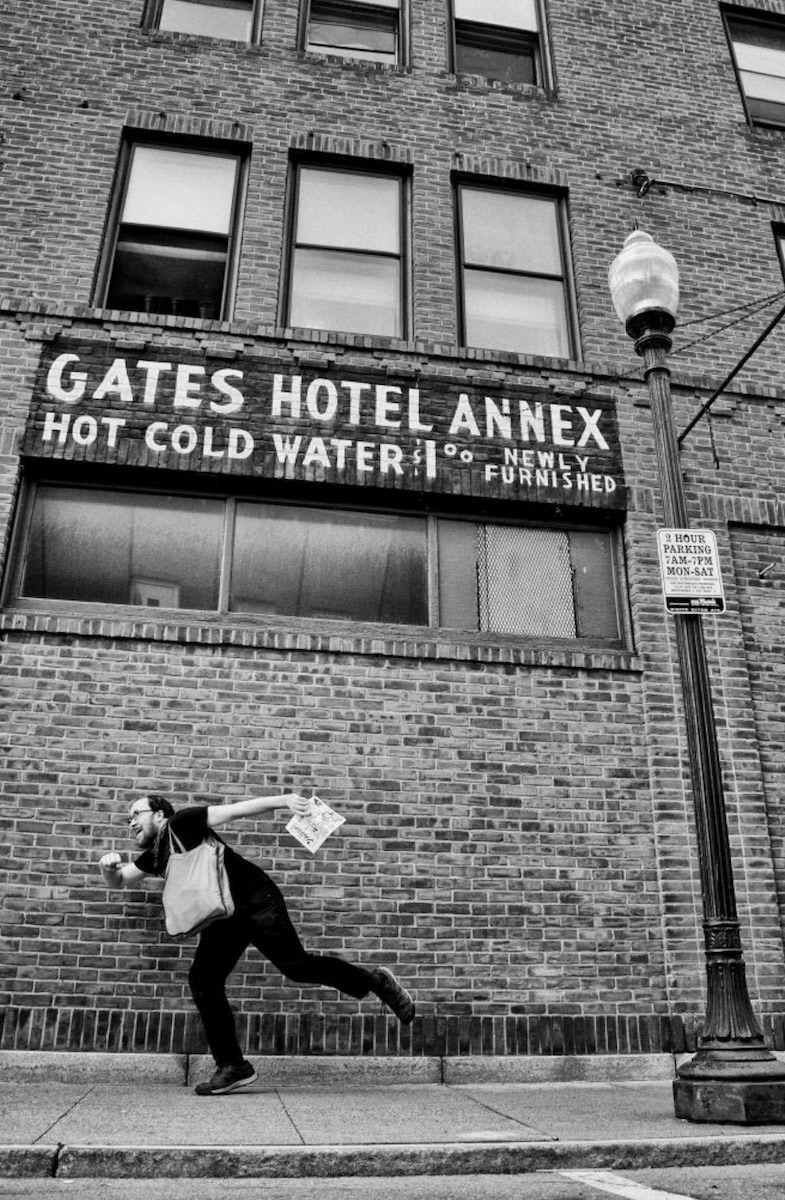 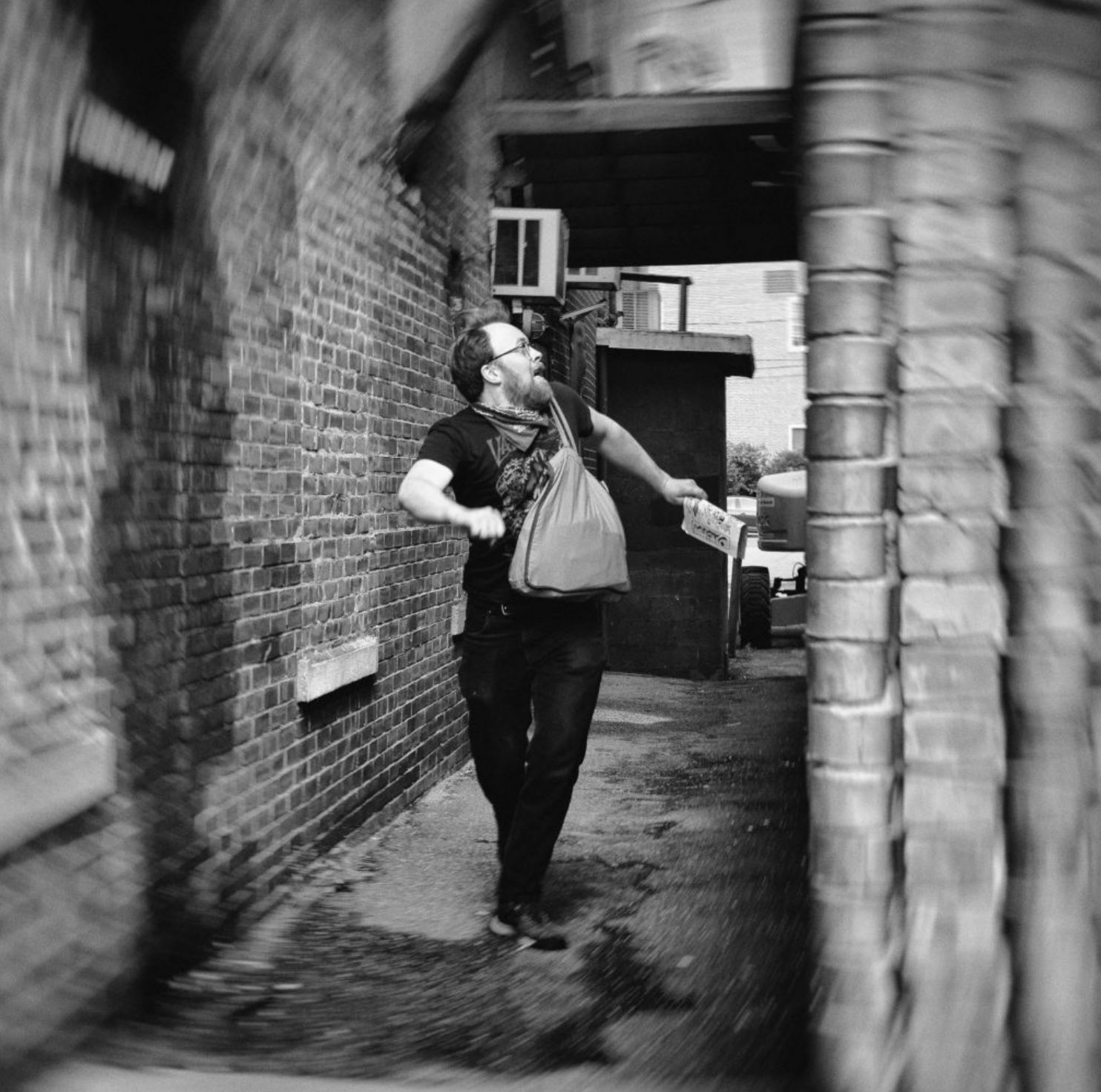 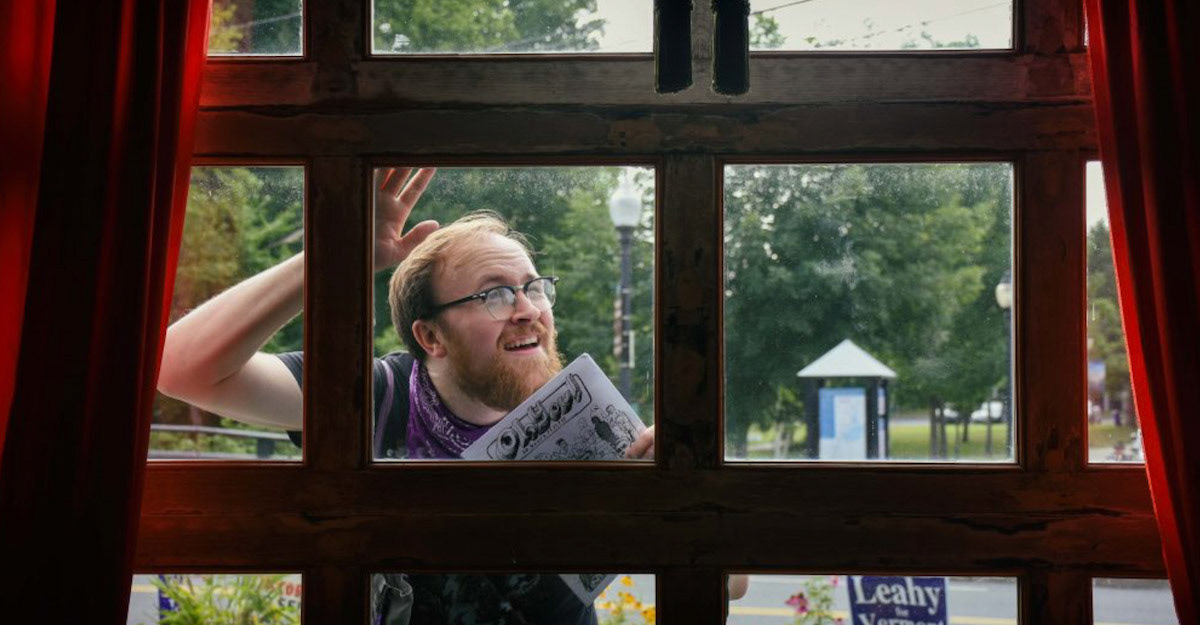 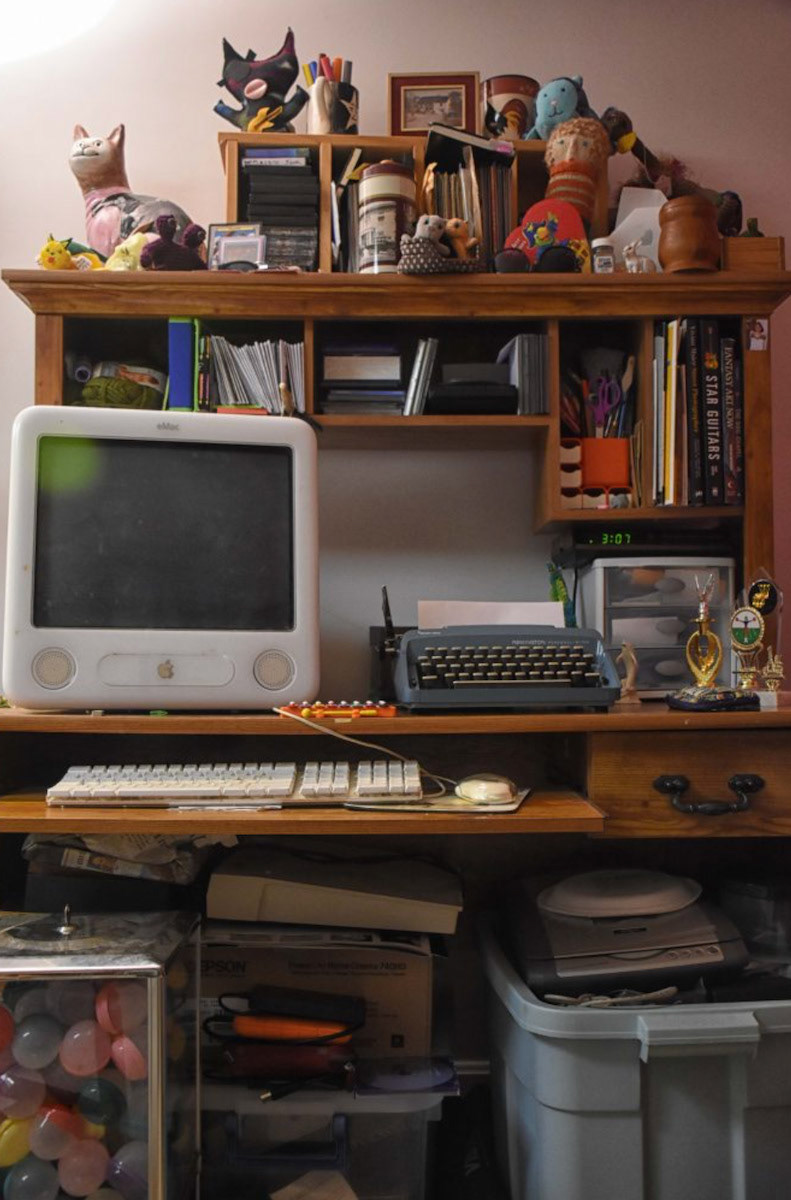 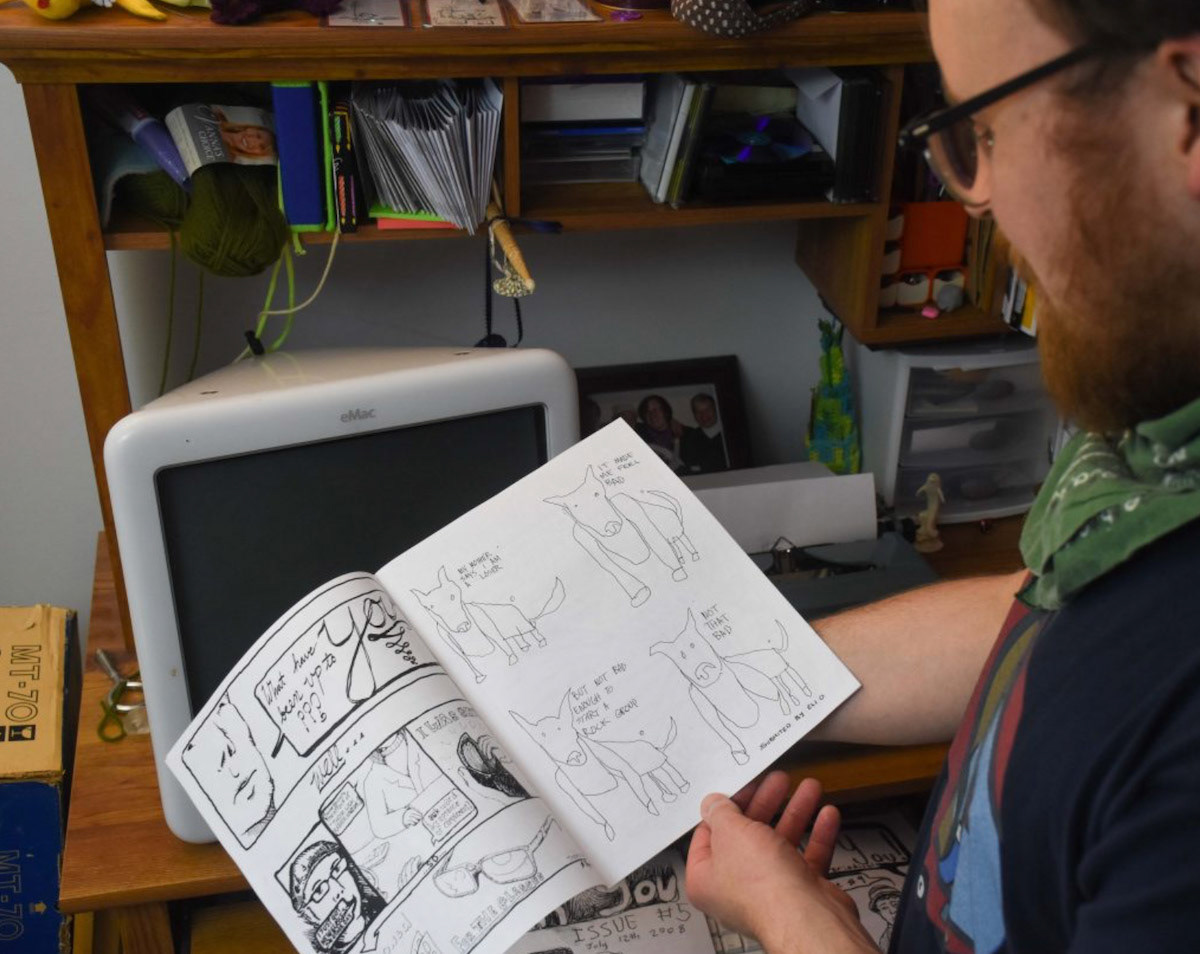 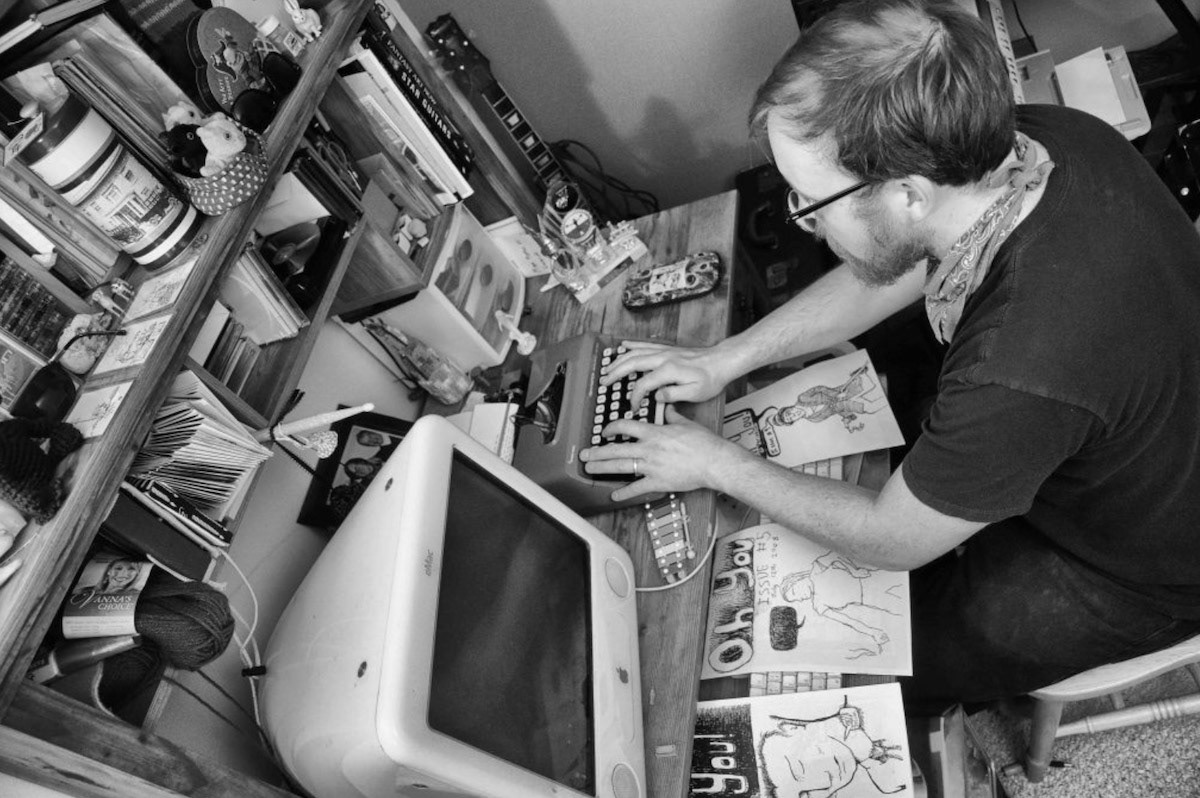 How did you find contributors to send in cartoons and other content for the zine?
In the early days my friend Eli, who worked with me at Dan & Whit’s, would contribute several pages’ worth of stuff. That really helped, because otherwise it was really hard to put out an issue completely alone. I didn’t get nearly as many contributors as I originally thought, and over the years it has waxed and waned. I usually have one to three per issue, occasionally more. As of five years ago my main guy is Fred. We met through mutual friends at the flower shop. He’s got this band called Pliable Tones, and he’s long been into the zine thing.
Do you do all the distribution yourself?
I go to Gnomon copy and make about a hundred copies of each issue. I mail it to a couple people, but mostly I just put it around wherever I can. I bring it to shows, to Revolution, to the flower shop—most of the places in White River.
And you give it away for free?
Yeah. I tried to sell it for the first 10 issues, but then I realized I gave them away more often than not. I didn’t really care about investing the money and not making anything back on it. 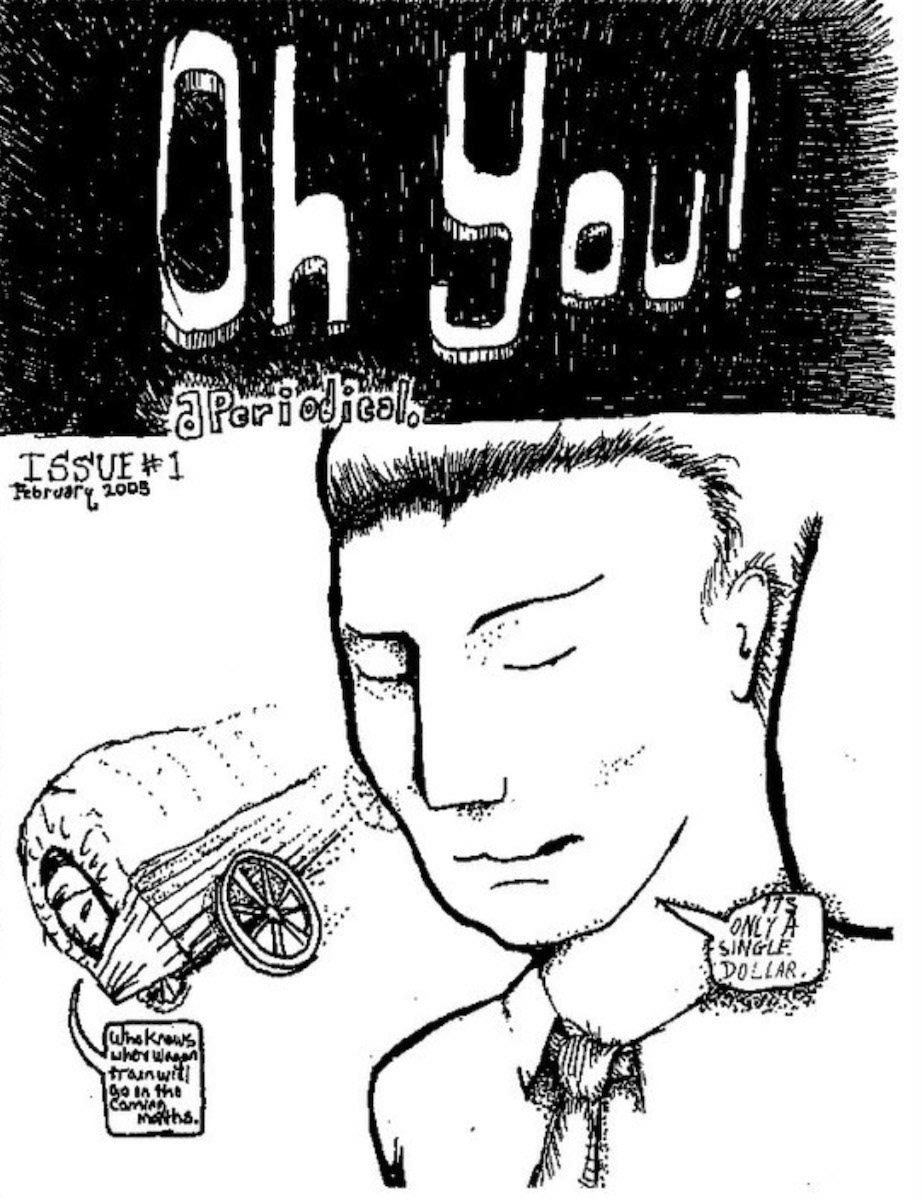 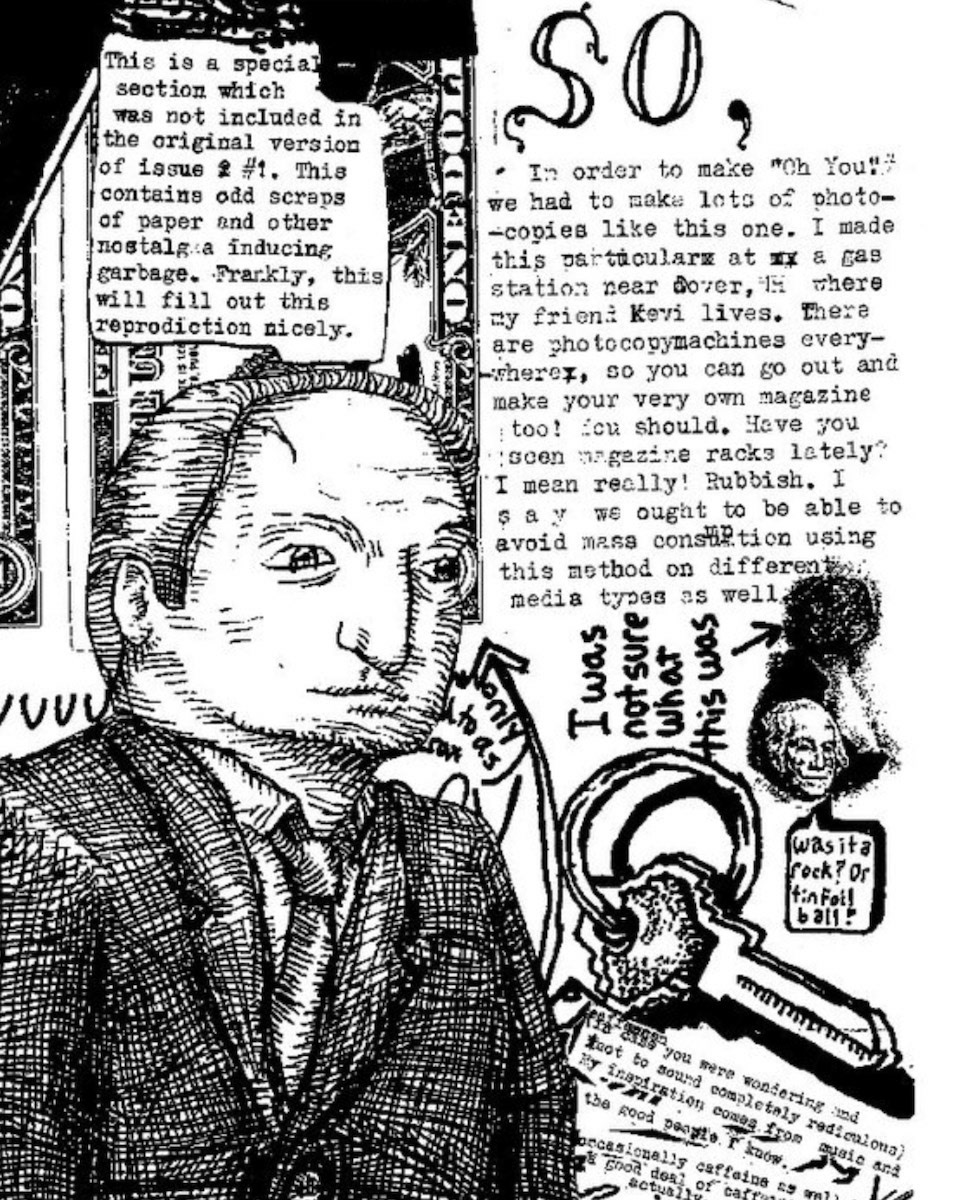 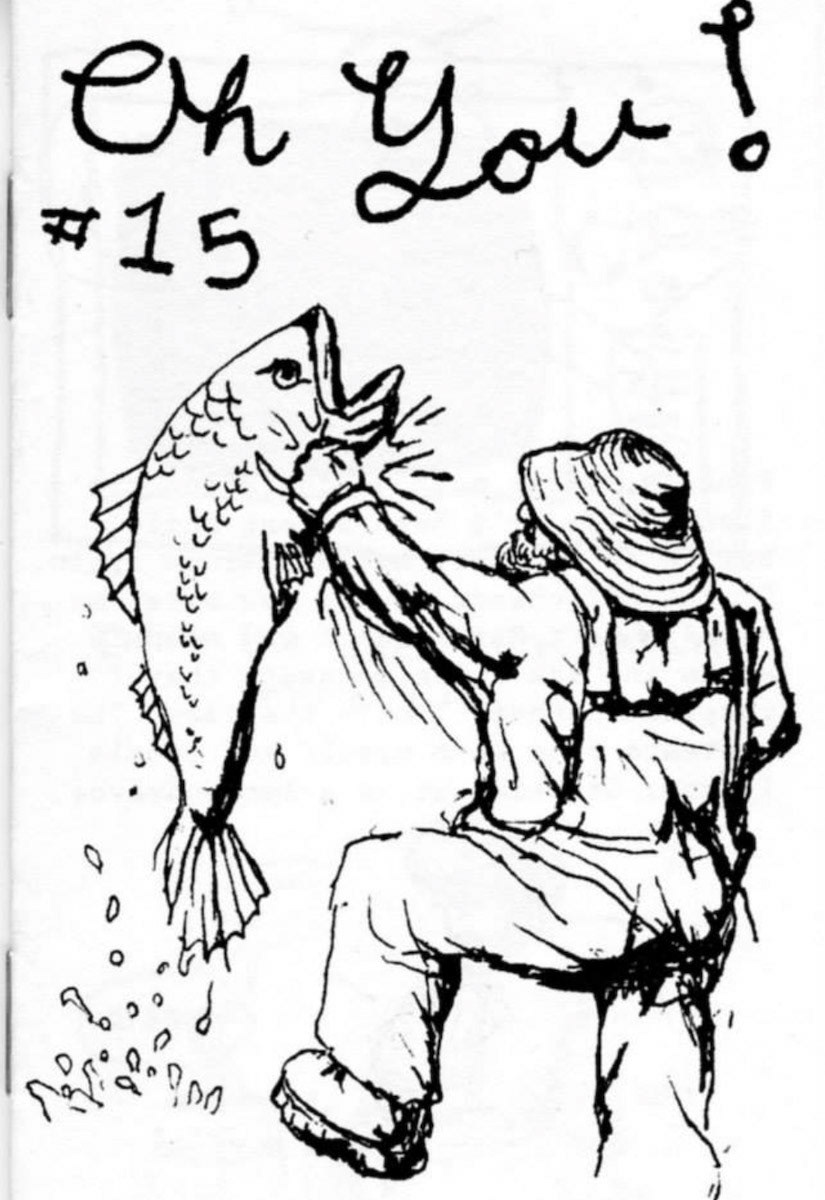 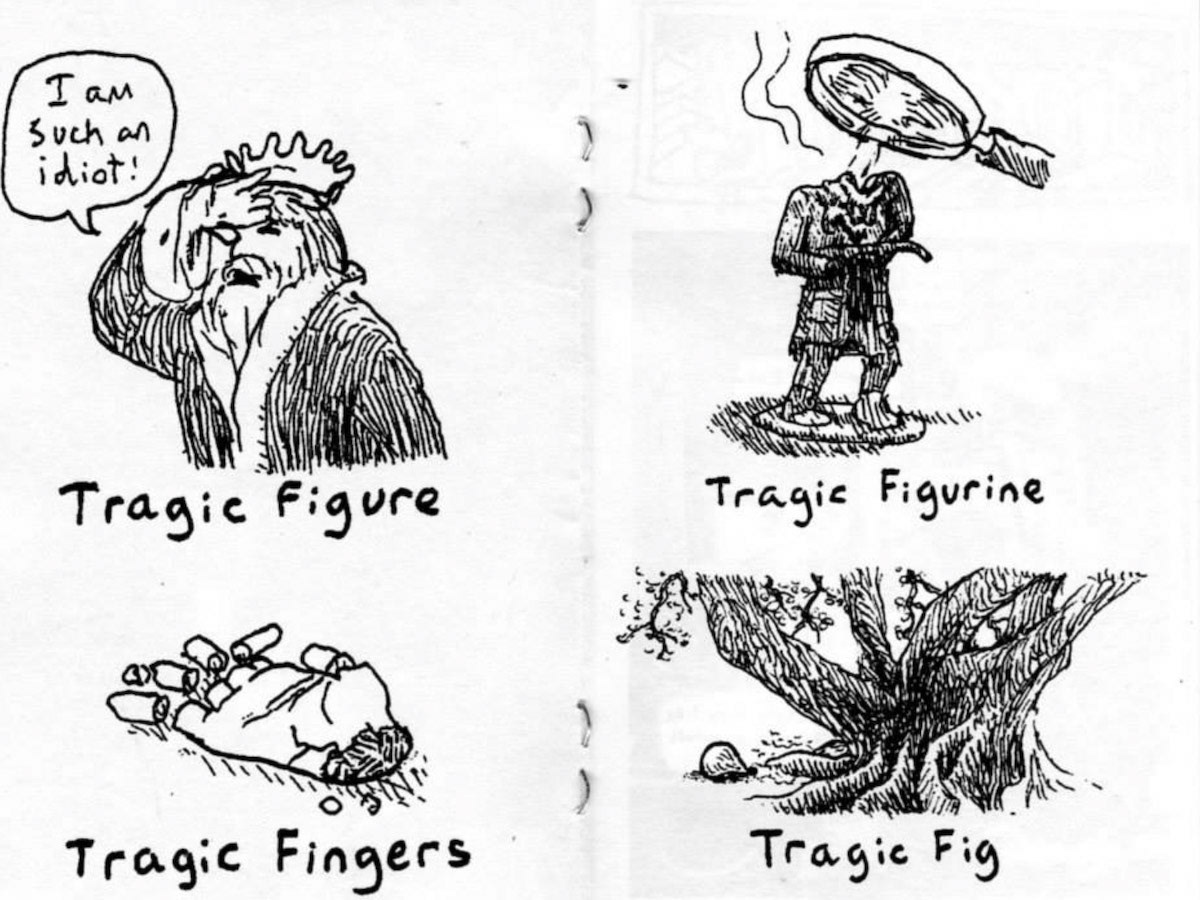 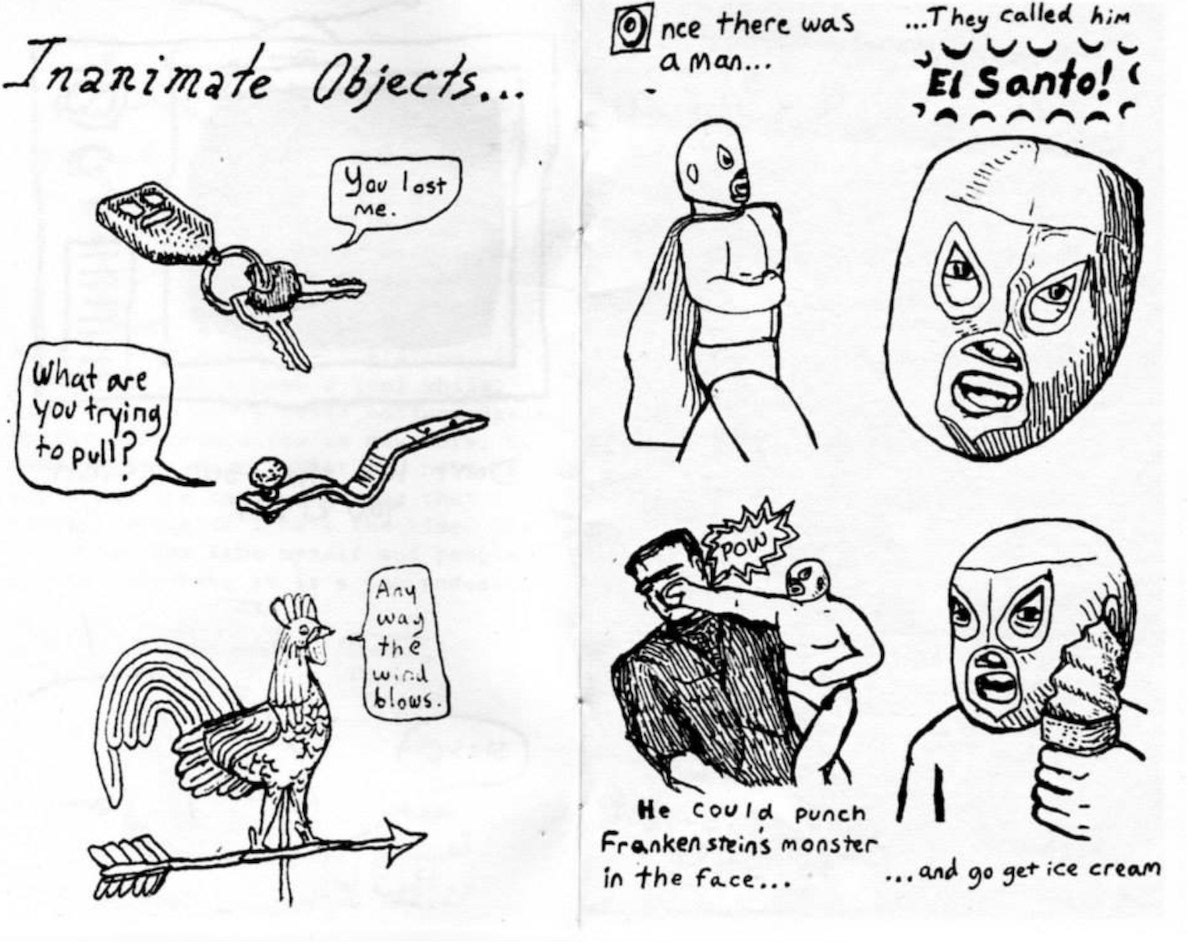 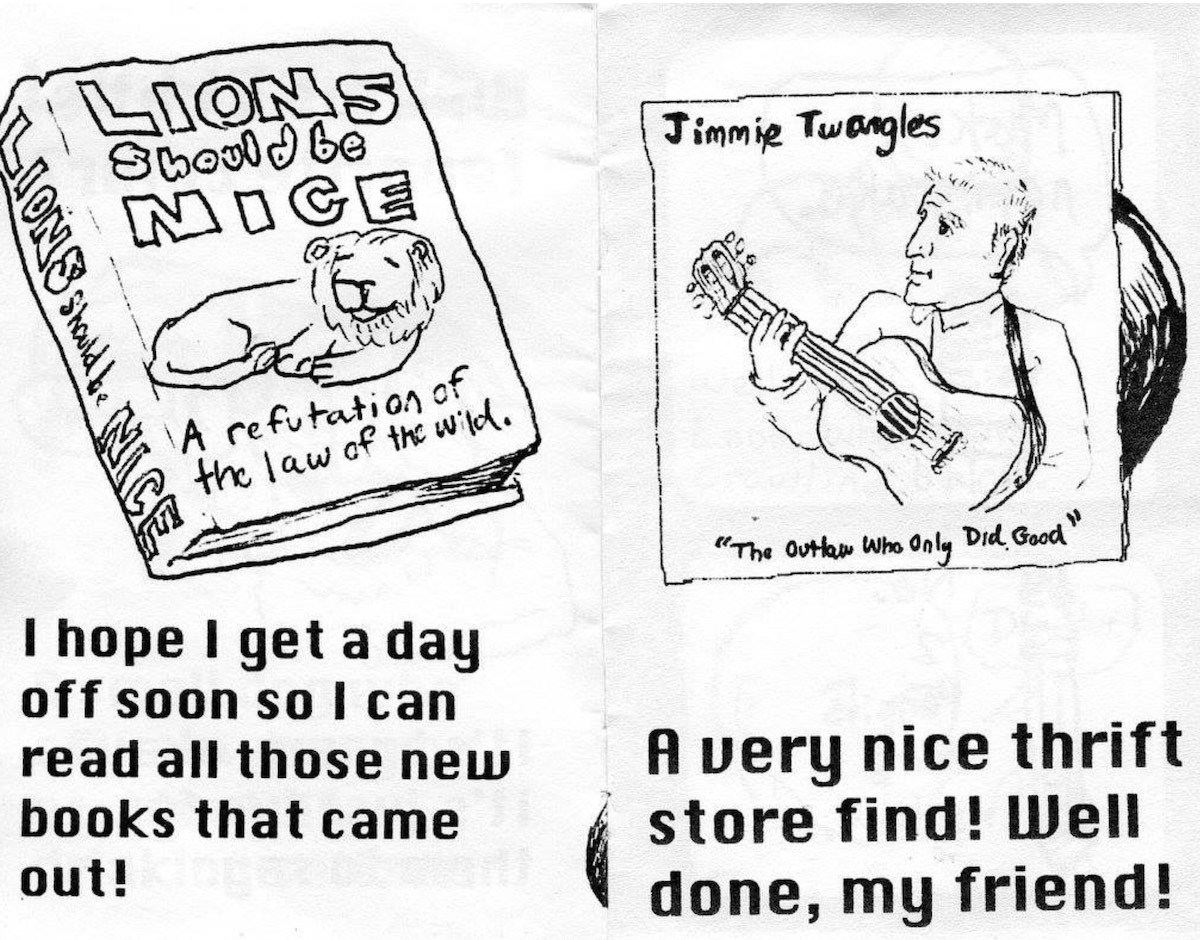 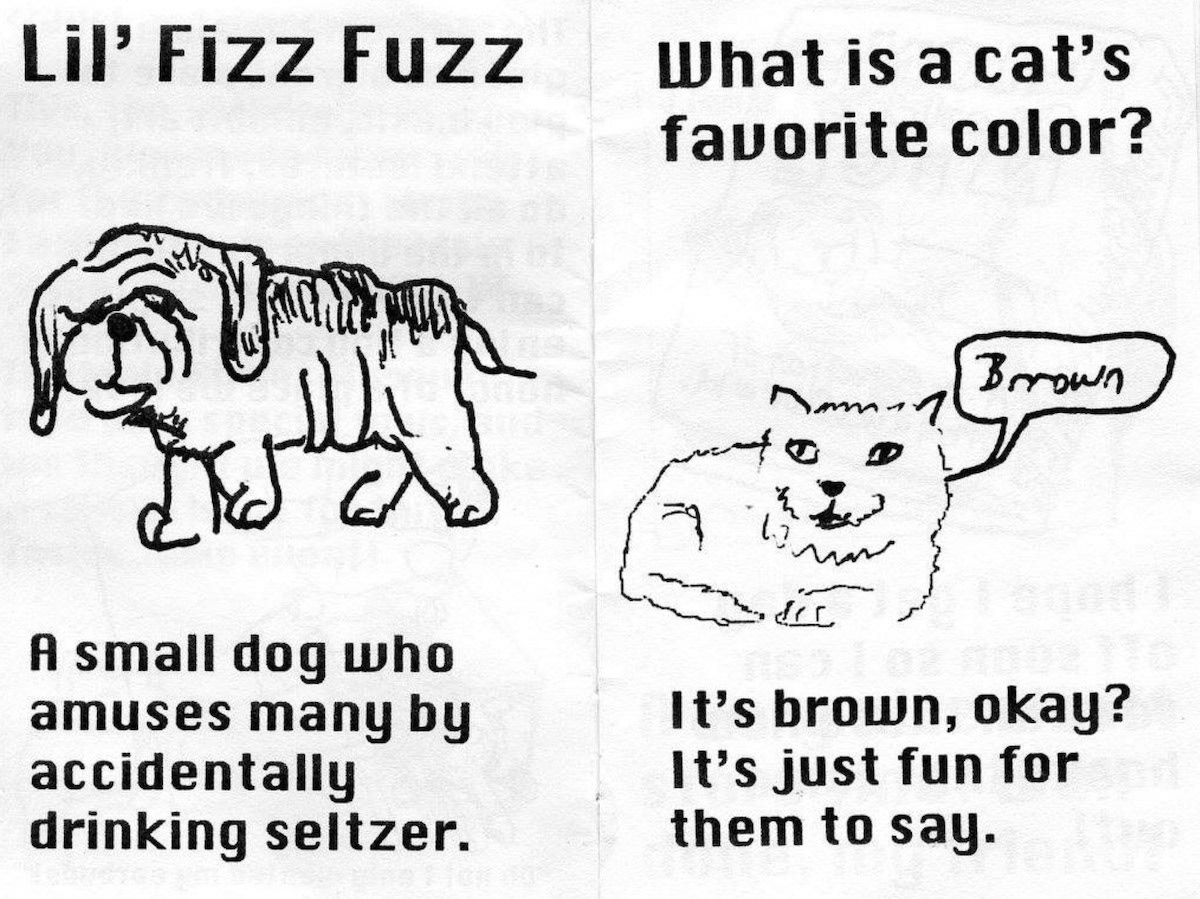 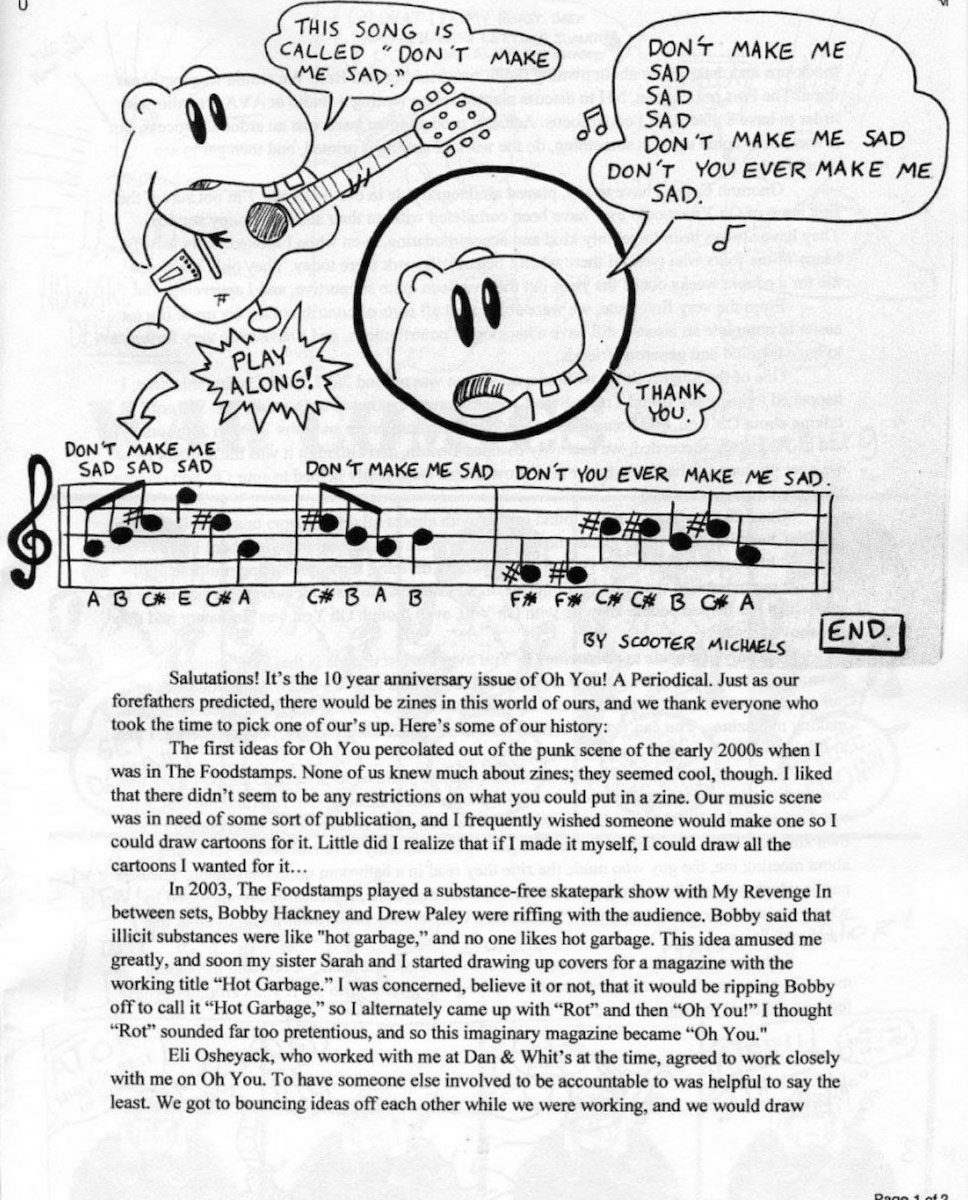 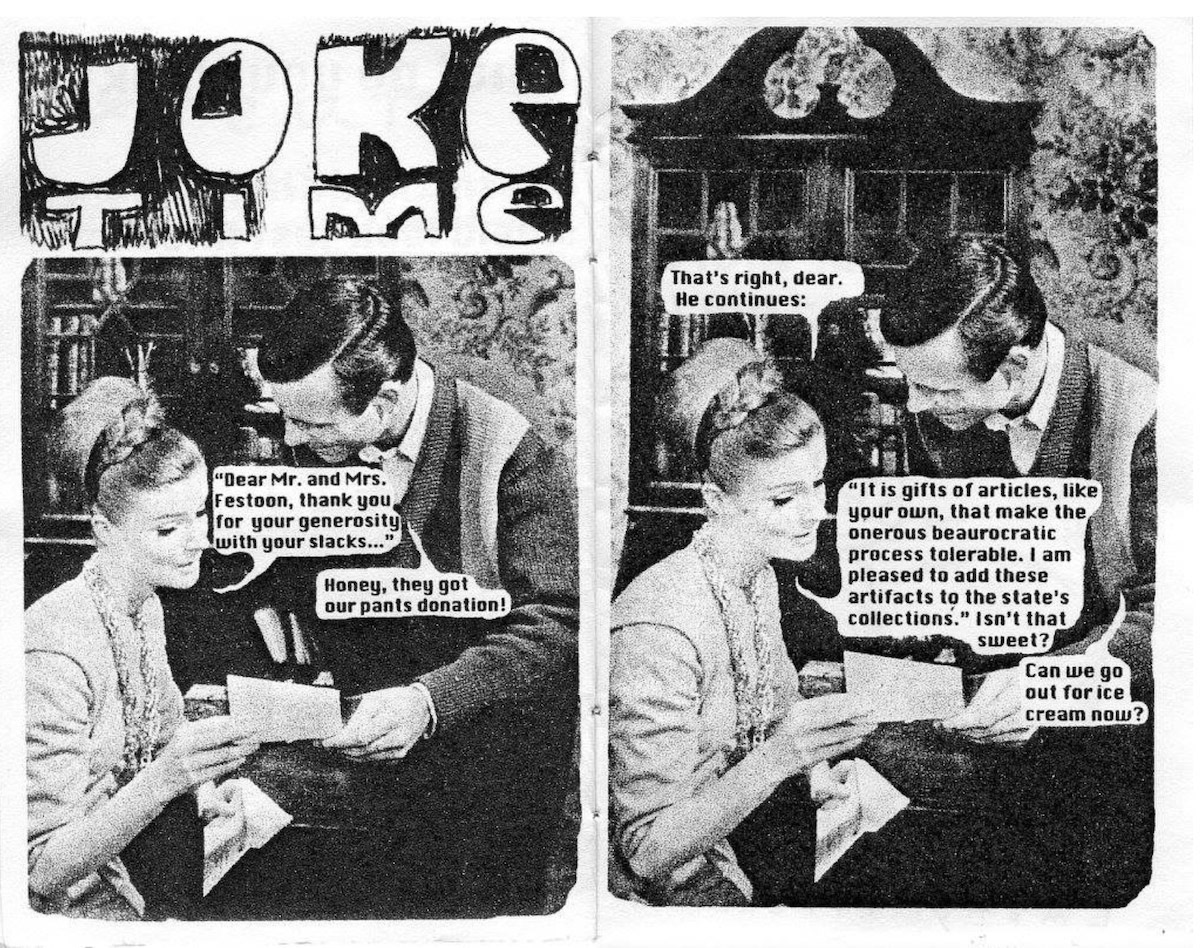 Do you keep an archive of old issues?
I try to make sure I have ten sets of copies of all issues. I’m going to let those run out and then put together an anthology. I think a book would be more appropriate than handing someone every issue that I’ve ever put out.
Is there one issue that you’re particularly proud of?
There’s an issue that includes a glow-in-the-dark Caring Babies record, and I really like that one. Usually people want to pay me for that issue, but if there’s someone who I feel like really ought to have a copy, then I don’t worry about whether they have money or not. All the other issues I just actively give away for nothing. And that works out well.
How many issues have you put out?
Including a couple little weirdo issues, I’m up to 18, and the next one is coming out soon. It’s usually about one a year, but lately I’ve done a few four-issue years. I’m trying to up my game.
What has motivated you to keep the zine going over the past 11 years?
My contributors, especially Fred. There’s a bunch of people who shop at the Coop who I met years ago while handing out my zine at Dan & Whit’s. They still ask after it, and that always motivates me. It’s really nice, because they’re people who I might not have gotten to know otherwise.

Read more about Oh You! on the web and check out the entire 11-year archive on Facebook. Look for the next print issue, coming soon to various locations around White River Junction. The Caring Babies are on Facebookand the web. View more of Matt’s videos on his YouTube channel and on his other YouTube channel.
About the Author/Photographer:
James Napoli is the founder of Junction Magazine. James has since moved to Minnesota and all content is managed by a collective of artists. Read more about them here.
↑Back to Top